Former Kosovo Liberation Army (KLA) militant Hashim Thaci was treated to a lavish inauguration ceremony on Friday, the ceremony attended by over a thousand guests from 50 countries, including diplomats from states which recognize Kosovo, which broke off from Serbia in 2008. Sputnik offers a brief analysis of the alleged ex-bandit turned president.

Thaci, who has a long record of participating in Kosovar politics, previously served as the head of the breakaway republic's foreign ministry, as deputy prime minister and, between 2008 and 2014, as prime minister. He began his political rise in the early 1990s when, using the moniker 'The Snake', he became a member of the KLA leadership's inner circle, responsible for securing funds and arms, and for training militants in neighboring Albania to be sent to Kosovo.

​In her 2008 book entitled The Hunt: Me and the War Criminals, International Criminal Tribunal for the former Yugoslavia (ICTY) prosecutor Carla Del Ponte alleged that Thaci was directly involved in the KLA's illegal organ trade; the KLA was accused of harvesting the organs of mostly Serbian prisoners of war at secret detention centers in Albania.

In 1999, the prosecutor wrote, about 300 Serbs and other non-Albanians were kidnapped and taken to northern Albania, where their organs were removed, and sent, for profit, to hospitals across Europe.

In late 2010, Swiss politician Dick Marty presented an expansive report on the issue to the Council of Europe, saying there were "credible, convergent indications" that the illegal organ harvesting was indeed taking place, and that Thaci was the head of the "mafia-like" group responsible for the organ harvesting, as well as drug and weapons smuggling to countries across Europe.

Thaci denied the allegations and said that he would file a lawsuit against Marty, but never did. 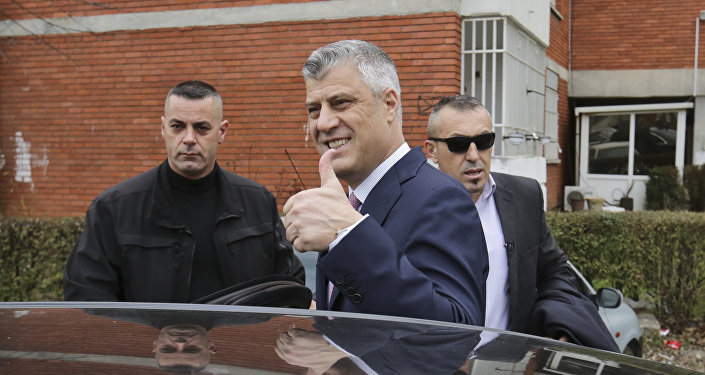 © AP Photo / Visar Kryeziu
Kosovopranos: German Intel Had Mafia Dossier on Kosovan President Since 2005
Most recently, a leaked internal Federal Intelligence Service report published by WikiLeaks confirmed that the newly-elected president has links to contract killers, revealing that he had been one the leaders of the Drenica criminal group, linked to organ, arms and drug trafficking operations and connected to other criminal groups including the Czech and Albanian mafia.

With The Hague vowing to establish a special court to try war crimes committed during the war in Kosovo, it remains unclear whether Thaci, one of the founders of the Kosovo Liberation Army, which has itself been accused of war crimes, will appear before the court.

However, if his attitude toward the court is any indication, probably not. Thaci, the BBC recently pointed out, "welcomed the establishment of [the] tribunal," and "personally led the process to establish a special court."

"We have nothing to hide. It's an opportunity to deal with the past and move forward, and also a chance to explain that the war was a just struggle," the suspected ex-gangster told the broadcaster.

"I am an ordinary President of a nation of heroes" President Thaci today at the ceremony. pic.twitter.com/OrCqUrJxly 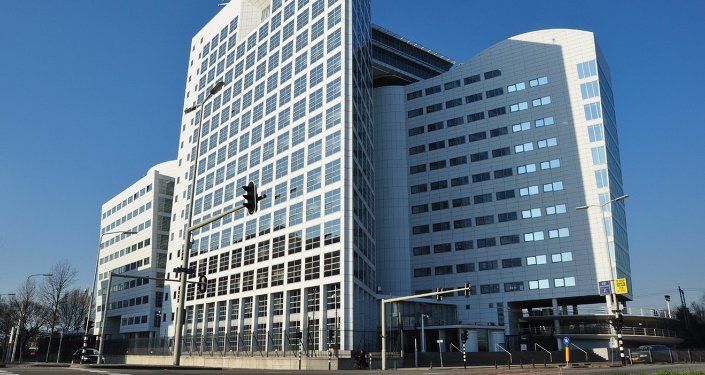 © Wikipedia / Vincent van Zeijst
Serbian FM: Hague Tribunal Failed to Punish War Crimes in Kosovo, Stirred Nationalist Sentiments
Sputnik Serbian spoke to Zivojin Rakocevic, a political analyst and writer from Kosovo's Serbian enclave of Gracanica, to get a sense of the real implications of his confirmation as president.

Unfortunately, Rakocevic noted, Thaci's main 'accomplishment' during his years in Kosovar politics has been to expel the Serbs from cities across the region, including the capital of Pristina, where only a few dozen mostly elderly Serbs from the estimated 40,000 who once lived there now remain.

"At the same time, he managed to destroy Kosovar Albanians' future. Today, 80% of them want to leave Kosovo, which NATO bombed with shells containing depleted uranium, and Thaci finished off with his criminal structures," Rakocevic said.

"He has destroyed any possibility for Serbs to return to this region, and dealt a blow to the Serbian Orthodox Church. He has control over the Islamic radicals, and can use them at any time."

"But his greatest achievement," Rakocevic scornfully recalled, was that after all his crimes, many of them documented by Western political, legal and intelligence officials, "Thaci remains a legitimate, important 'friend of the international community' and of Western powers."

Honoured to represent Ireland at inauguration of President Thaci of Kosovo in Pristina this morning pic.twitter.com/8Wy1D2hwaR

© Flickr / ICTY photos
Russian Foreign Ministry Blasts the Hague for Unfairly Targeting Serbs in Prosecutions
​​For his part, Beljulj Becaj, a Kosovar Albanian political analyst from Pristina, told Sputnik that Thaci's 'achievements' did not earn him the presidency. In his words, the alleged ex-gangster was only able to become president thanks to Kosovo's flawed electoral system (in Kosovo, the president is chosen by the parliament).

"The presidency must serve as a unifying factor, while Thaci is a divider. Factually his achievements contradict what is stated in the constitution."

Becaj noted that Thaci's election would only increase the trust gap between the government and the opposition, and would result in growing discontent not only among the opposition, but from the majority of Kosovars as well.

"The weight of the crimes of the past, if this information is correct, is not what Kosovo needs. Kosovo must have a president who would serve as an exponent of integrity, morality and justice," the political analyst emphasized.

Unfortunately, the breakaway's political establishment, and their benefactors in Europe and the US, seem to have accepted a situation where the geopolitical project they helped initiate in 1999 by bombing Yugoslavia is now headed by a suspected criminal, whose gang is suspected of some of the most grisly crimes imaginable.