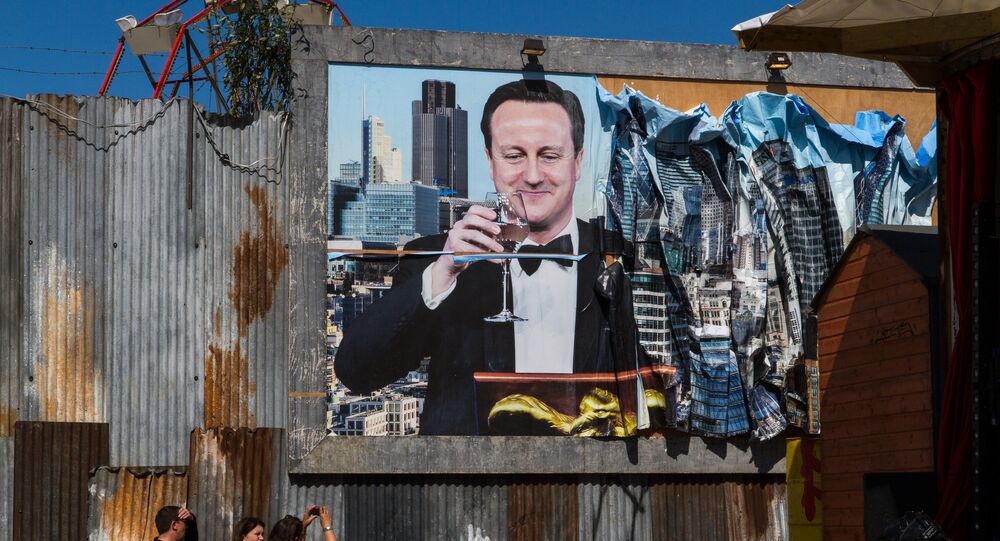 UK Prime Minister David Cameron is facing more scrutiny over his commitment to reform global financial irregularities after it was revealed that he personally lobbied the EU to prevent offshore trusts from being included in a 2013 EU-wide crackdown on tax avoidance.

In a letter, addressed to then European Council President Herman Van Rompuy, Cameron argued that offshore trusts should not be subjected to the same transparency requirements as companies.

"It is clearly important we recognize the important differences between companies and trusts," he wrote.

"This means that the solution for addressing the potential misuse of companies — such as central public registries — may well not be appropriate generally."

Under Fire Over Tax Evasion Links

© REUTERS / Joshua Roberts
Cameron Accused of Hypocrisy and Soft-Pedaling Over Tax Havens
The revelations come as Cameron faces questions regarding potential benefits he may have received from Blairmore Holdings Inc, an offshore trust fund set up by his late father, Ian.

The trust was named in the recently released 'Panama Papers' — with political rivals calling on the prime minister to declare whether he had received any financial benefit in the past as a result of his father's offshore business transactions.

Cameron moved to distance himself from his late father's Bahamas-based fund, saying that neither he, his wife or their children would benefit from any offshore trusts or funds in the future.

This was followed by another revelation that Cameron's father was involved in a second company based in a tax haven.

@UKLabour @jeremycorbyn Yes there can and yes there will while capitalism continues. It is THEIR system for THEIR benefit. It has to go!

British media reported that Ian Cameron was the director of the Jersey-based Close International Equity Growth Fund and held 6,000 of the company's shares, which were reportedly left to his family upon his death in 2010.

Despite denying suggestions that he benefited from any illegal or unethical financial activities carried out by family members, the Panama leaks, along with the revelation of the 2013 letter to Mr Van Rompuy, have damaged Cameron's credibility on the issue of tax evasion.

While publicly declaring to put an end to the days of widespread tax evasion, many critics have accused the prime minister of a lack of meaningful action, pointing to his government's failure to reform tax rules for Britain's overseas territories and crown dependencies, which are used by many businesses and individuals to avoid paying tax.

The November 2013 letter to Van Rompuy also seems to contradict Cameron's claim that his government had "led the world" in cracking down on tax loopholes by lobbying for an open register to reveal the identities of those people benefiting from offshore companies.

@NeilClark66 @BBCNews True, but Jnr realised that the financial markets are risky. If you can rig the game in your favour, though…

The letter revealed Cameron's reluctance to include offshore trust funds in new EU transparency regulations, with critics noting that trust management and private wealth banking is a major source of income for the UK economy.

Responding to the letter, a government spokesperson played down the significance of Mr Cameron's lobbying efforts.

"At the time of the PM's letter, the government was concerned that including trusts would distract from action against those areas of most concern, such as shell companies, and, in practice, these further changes weren't achievable.

"In the subsequent negotiations, we were able to secure a sensible way forward which ensures that trusts which generate tax consequences have to report their ownership to HMRC [UK tax collecting department]."

Cameron Accused of Hypocrisy and Soft-Pedaling Over Tax Havens