Sigmundur Davíð Gunnlaugsson has resigned as Prime Minister of Iceland in wake of the Panama Papers, though he will remain on as leader of the Progressive Party.

Earlier, Iceland's Prime Minister Sigmundur Davíð Gunnlaugsson requested the country's president to dissolve the parliament, as pressure to step down had been mounting following the disclosures of the Panama Papers.

On Monday, thousands attended a demonstration in Reykjavik's Austurvöllur square, calling for the Prime Minister Sigmundur Davíð Gunnlaugsson's resignation, whereas a petition for Gunnlaugsson to step down was signed by 23,000 Icelanders. Pressure has been mounting for Gunnlaugssonin to step down ever since the Panama Papers revealed that he co-owned a company called Wintris Inc, set up in 2007 in the British Virgin Islands order to hold offshore investments, with his wealthy partner and later wife, Anna Sigurlaug Pálsdóttir. 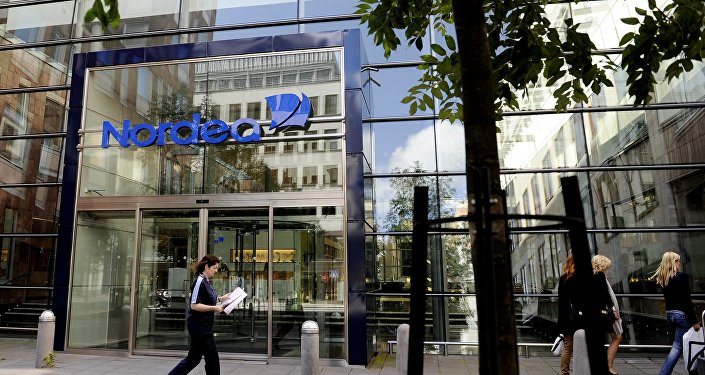 © AFP 2019 / JESSICA GOW / SCANPIX SWEDEN
The Rich Get Richer: Scandinavia's Largest Bank in Tax Evasion Leak
Iceland's PM, who earlier notoriously walked out of an interview with the Swedish broadcasting company SVT, specifically vowed to not resign despite the public pressure. During the scandalous interview, which was broadcast live, Sigmundur Davíð said it was very important for everyone to pay a fair share into society and that paying less than one's share was equal to cheating the society. Later, he accused the Swedish journalists of making a mountain of a molehill.

During Monday's debate in the Althing [Iceland's parliament], Gunnlaugsson received no support from either his own party colleagues of the Progressive Party or his government allies of the Independence Party. On Tuesday, the PM held an internal meeting with his colleagues of the Progressive Party, but failed to receive any support as many urged him instead to resign. He also discussed the issue with the Finance Minister Bjarni Benediktsson, who also happens to be the leader of the Independence Party, but received no support either. Notably, Benediktsson has been mentioned in the Panama Papers alongside Gunnlaugsson.

© REUTERS / Christian Hartmann/Files
Iceland Prime Minister Refuses to Resign Over Offshore Leaks
During a later meeting with President Ólafur Ragnar Grímsson, the PM requested him to dissolve the parliament, which the president refused, wrote the Icelandic newspaper Morgunbladir. At the same time, Prime Minister Jóhanna Sigurðardóttir said that Sigmundur Davíð should resign.

Sigmundur Davíð Gunnlaugsson, who was ushered in office in 2013 following the financial crash that almost crippled Iceland's economy, is the youngest Prime Minister in the history of the Icelandic Republic and was at that time the world's youngest democratically elected head of government. It is also noteworthy that Icelanders' dissatisfaction was already high due to other allegations of corruption even before news of the Panama Papers broke. According to an opinion poll conducted earlier this year, nearly 70 percent did not support the current coalition government.

Meanwhile, Reykjavik's famous ice cream parlor Ísbúðin Valdís has responded to the controversy with an ice cream flavor called "Panama offshore". The new dessert is touted as a mixture of lemon sorbet and vanilla ice. The sweet course has been aptly named Wintris after Gunnlaugsson's offshore company and is described as "sour, with a tinge of arrogance" as well as "tax deductible".