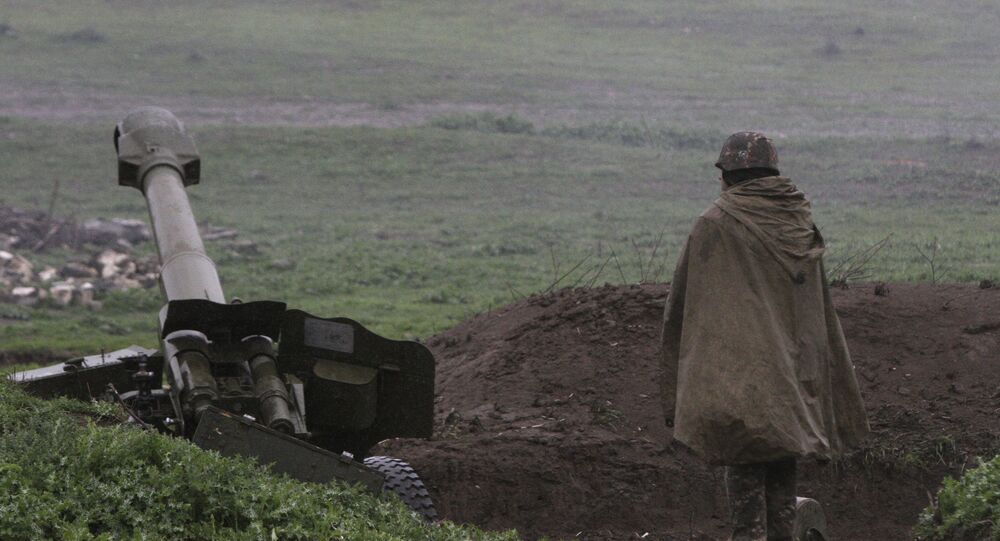 Armenia and Azerbaijan agreed on a bilateral ceasefire along the contact line in Nagorno-Karabakh, which came into force at noon local time on April 5.

​The Armenian Defense Ministry has confirmed that a ceasefire agreement in Nagorno-Karabakh is currently being prepared, the ministry's press secretary said Tuesday.

"A document on a ceasefire is currently being prepared. I'm not authorized to give details of the document," Artsrun Hovhannisyan said.

A bilateral agreement on a ceasefire is being prepared at the meeting of the OSCE Minsk Group on Nagorno-Karabakh in Vienna.

The OSCE Minsk Group, co-chaired by the United States, Russia and Farnce, has been mediating the Nagorno-Karabakh crisis settlement since 1992.

​The Azerbaijani Defense Ministry also confirmed the ceasefire, stating that all hostilities in Nagorno Karabakh ceased at 12:00 local time.

"We made the decision to cease fire along the Karabakh contact line on April 5 at 12:00 [08:00 GMT]," the ministry spokesman Vagif Dargali told RIA Novosti.

#Official:
Azerbaijan MoD: "Since 12:00 all hostilities ceased between Azeri and Armenian armies" #NKPeace (12:00 means 3 hours ago)

Earlier, the self-proclaimed Nagorno-Karabakh republic's army said to have recieved an order from the political leadership to cease fire.

The Nagorno-Karabakh Republic (NKR) demands recognition and an agreement that would guarantee that hostilities in the area do not resume, head of the NKR representation in Moscow Albert Andryan announced.

"Karabakh has a single stance — recognition of the Nagorno-Karabakh Republic and a clearly formulated agreement on non-resumption of hostilities," Andryan told Govorit Moskva radio.

He also stated that Nagorno-Karabakh Republic (NKR) will never agree to wide autonomy while remaining part of Azerbaijan.

"Such a decision is impossible. After what happened, such a decision cannot be made, not in 50 and not in 100 years. Generations have changed in Azerbaijan, in Armenia, in Karabakh, new people are being born — a lot of people — who did not see this war and don't know about it. But there is massive propaganda and agitation, the president of Azerbaijan states every day that he will take Karabakh by force," Andryan said.

© Sputnik / Iliya Pitalev
Why Nagorno-Karabakh's 'Frozen Conflict' Has 'Potential to Extend Beyond Region'
Armenia and Azerbaijan declared a dramatic escalation of the situation in the Nagorno-Karabakh region on April 2. Baku and Yerevan traded blame for breaching the truce in the conflict and reported heavy fighting in the area.