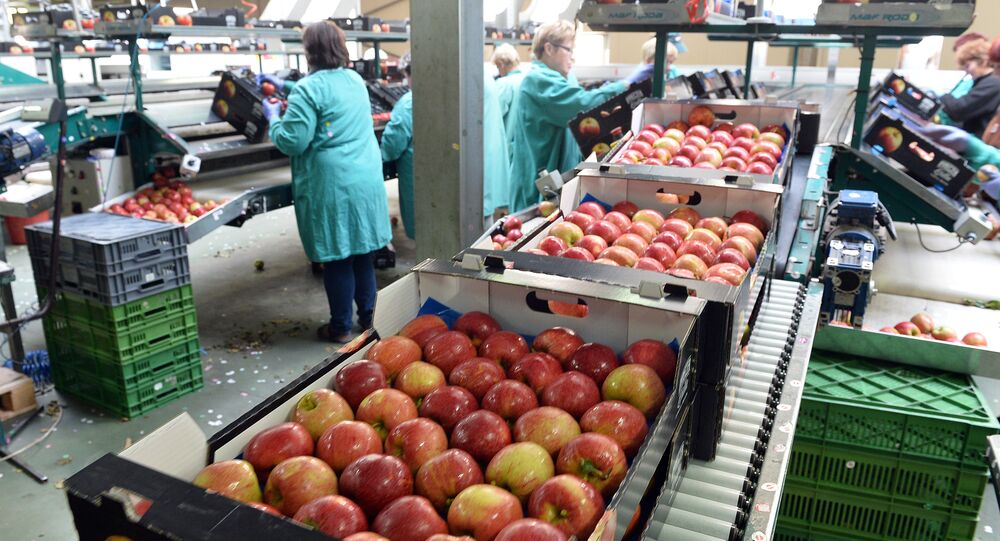 No longer able to sell their produce to Russia, Polish apple farmers are giving it away for free in a campaign organized by the local Red Cross, Polskie Radio reported.

The farmers are handing the fruit of their labors over to charities which then truck the apples to nearby towns and villages where anyone is free to take them.

“We have a lot of apples here. Each one can take 20 kilos, a monthly limit and there are a thousand crates in every truck. The apples go to anyone who needs help and also to low-income pensioners,” Red Cross representative Stanislaw Baranowski said.

He added that the apple-distribution campaign will run until the end of this month.

© Photo : Twitter/@USNATO
Problem Solved: Poland Gives Away Embargoed Apples to US Army
Earlier, the Polish Peasant Party, formerly part of the country’s ruling coalition, called for the lifting of the EU sanctions against Russia.

Party leader Wladyslaw Kosiniak-Kamysz said during a meeting in Warsaw that Polish farmers had been hit the hardest by the Russian food embargo introduced in response to European sanctions imposed against Moscow.

Relations between Russia and European Union went downhill in 2014, following Brussels' decision to join Washington in accusing Moscow of fueling the Ukrainian crisis and to impose several rounds of sanctions against the country.

Russian authorities have repeatedly refuted the allegations, warning that the Western sanctions are counterproductive.

In response to the Western restrictive measures, in August 2014, Russia announced a one-year food embargo on meat, sausages, fish and seafood originating in countries that imposed sanctions against it.

The ban has since been extended for another year.

Problem Solved: Poland Gives Away Embargoed Apples to US Army