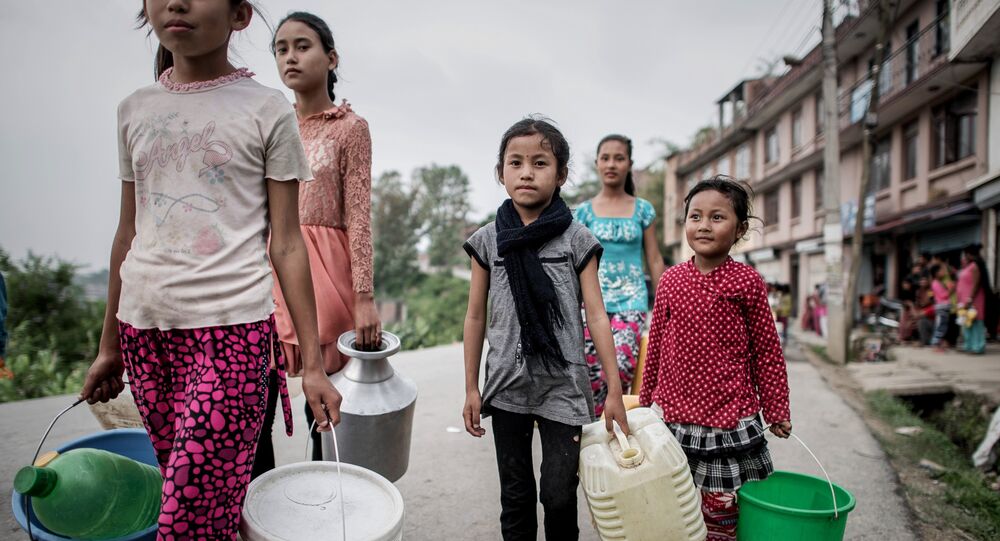 Britain's Home Secretary Theresa May has called for police to investigate claims that child survivors of Nepal's earthquake are being sold as slaves to wealthy families in the UK.

An undercover investigation by London tabloid The Sun revealed that girls and boys as young as ten were being traded as slaves on the black market for as little as US$3,670 (£5,250).

Slave trader Makkhan Singh is reported in the newspaper as saying: "We have supplied lads who have gone on to the UK" as he lined up a group of children.

Want to learn more about #trafficking in #Nepal? Read our research at https://t.co/3HW5GxA2hi #TaughtNotTrafficked pic.twitter.com/06SGdm8Pcm

The Sun alleges trafficking gangs target poverty-stricken families in Jalandhar, which is close to the Nepalese border.

"Most of the ones who are taken to England are Nepalese," the slave trader told the undercover reporter.

"We go to the poor parents, we talk to them, we do a deal

"For the supply of a boy, minimum 500,000 rupees (US$3,670). Then you have other costs associated with taking him to the UK, but that's your responsibility."

Singh reportedly spelled out the clandestine deal to the Sun's journalist. "I've got to pay their parents and I've got to make a bit. Every penny is accounted for. You're not our only customer.

"You do the deal, pay me the money and you're away free. You buy the kids and off you go."

Charity Child Reach Nepal tweeted, "Trafficking of children for unpaid labor has been on the rise after the earthquake."

Meet Padma, a young girl whose life was devastated by the earthquakes. https://t.co/9SNfM0SagI #TaughtNotTrafficked pic.twitter.com/ZxSi6McqRM

Theresa May, has urged the Sun newspaper to "share its disturbing findings so that appropriate action can be taken against the vile criminals who profit from this trade."

"No child, anywhere in the world, should be taken away from their home and forced to work in slaver," Mrs May told the newspaper.

The number of child victims of human trafficking increased by 22 percent in 2014, according to the National Crime Agency (NCA).

© Flickr / Peter Miller
UK Immigration Bill to Give 'Unbelievable Control to Human Traffickers'
Of the 3,309 potential victims of trafficking identified in 2014, 732 were children; the highest number since the UK Human Trafficking Center began estimating the prevalence of the crime in 2011.

In October 2015, the British government brought in the Modern Slavery Act to tackle slavery and trafficking in all its forms.

The Global Slavery Index estimates that 36 million men, women and children are trapped in slavery around the work in 167 different countries.