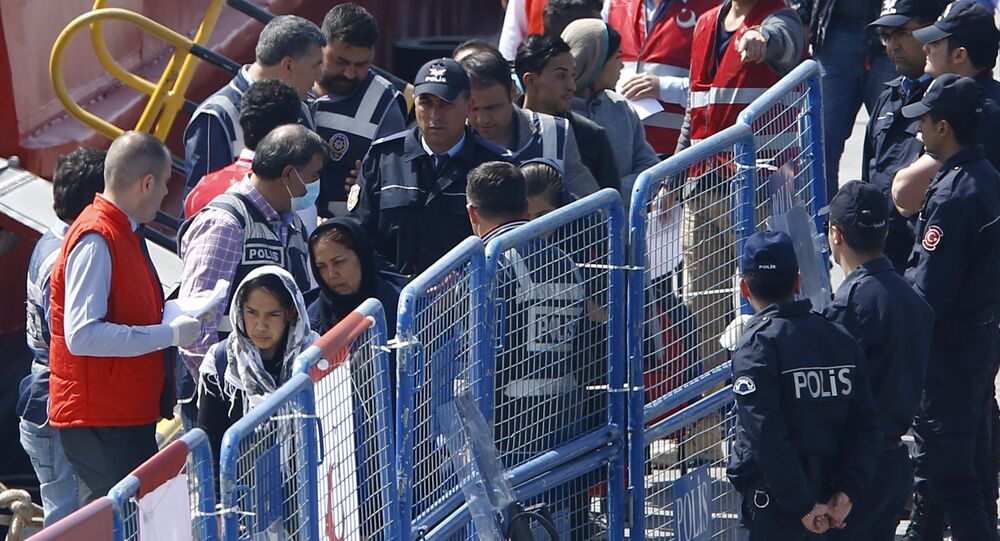 The EU border agency Frontex confirmed on Monday the successful transportation of more than 200 migrants from Greece to Turkey under the EU-Turkey migrant action plan, the agency's spokeswoman told Sputnik.

© REUTERS / Alkis Konstantinidis
Greece to Start Evacuation of Migrants From Athens' Port By Week End
MOSCOW (Sputnik) — Earlier in the day, the March deal between the European Union and Turkey, under which Ankara pledged to take back any illegal migrants who arrive to the bloc through its territory and instead send legal Syrian refugees to the bloc, came into force.

"On Monday, Frontex assisted Greece in transporting 202 migrants on three ferries from the islands of Lesbos and Chios to Turkey," Frontex representative Paulina Bakula said, adding that operation involved 180 escort officers deployed by the agency.

According to earlier reports, the first boat carried 136 migrants, mostly Pakistani nationals, and landed at the Turkish coastal town of Dikili.

"The Greek authorities remain responsible for public order and security on the islands," the Frontex spokeswoman commented on the security situation in the migrants camps in Greece.

On Saturday, migrants on Chios, fearing imminent deportation, broke through a razorwire fence surrounding the camp and marched on the town’s port. During the stampede three refugees received stab wounds and riot police tried to control the crowds using stun guns and teargas.

Clashes similar to those seen on Chios have become a daily occurrence on the island of Lesbos as well as on the mainland, where refugees have become stranded due to the closure of the Western Balkan route. Last month Macedonia closed its border with Greece following similar steps by Serbia, Hungary, Croatia, Slovenia and Austria.