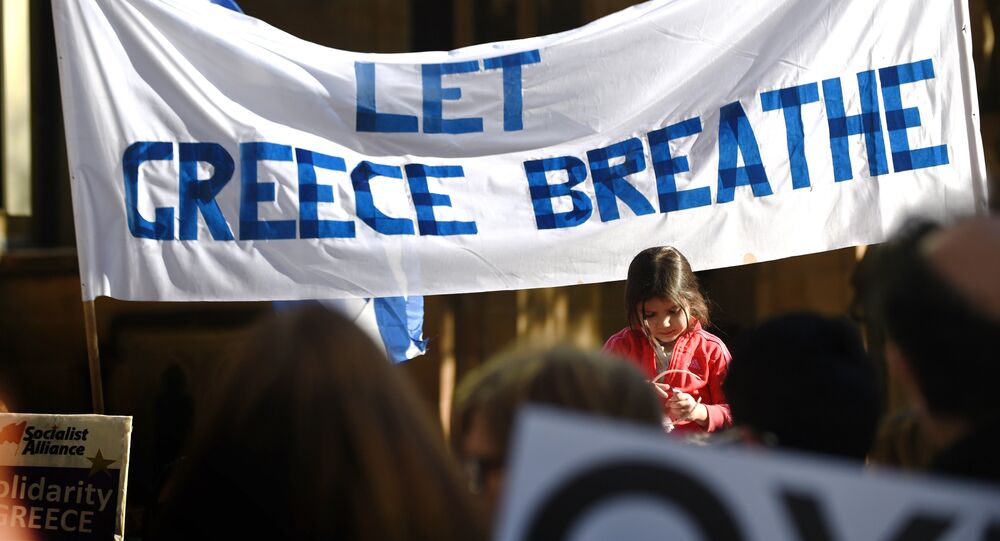 The leaked phone conversation between Poul Thomsen, the head of the IMF's European Department, and Delia Velkulesku, the IMF Mission Chief for Greece suggested a possible Greek default coinciding with the United Kingdom's referendum on whether it should leave the European Union ('Brexit').

However, the misspelling of Velkulesku's name as "Velkouleskou" in the leaked document suggested the transcript had been translated from another alphabet and that it had been leaked by a Greek official.

The row is embarrassing for Lagarde as the IMF has refused to take part in the third Greek bailout, saying that the terms demanded by the EU are "unsustainable" and that Greece should be allowed debt relief — the writing-off of part of its debts — in the same way as Germany was allowed it following the end of the Second World War. The IMF is facing a backlash from its own executive, as remaining party to the bailout program is in breach of its own policy of not lending money to insolvent governments.

The leaked documents suggest that the IMF is planning to tell Germany that it will abandon the Troika (composed of the IMF, European Commission and the European Central Bank) if the IMF and the Commission fail to reach an agreement on Greek debt relief.

Tsipras is — in fact — on the side of the IMF, as he has been calling for debt relief — an avenue blocked principally by German's Angela Merkel, who is pressing for Greece to make major changes to its tax and state pension schemes. The suggestion that the IMF was threatening to leave the Troika plays into Tsipras' hands.

According to the internal discussion published by WikiLeaks, Thomsen said:

"Look you, Mrs. Merkel, you face a question: you have to think about what is more costly, to go ahead without the IMF--would the Bundestag say 'The IMF is not on board?', or [to] pick the debt relief that we think that Greece needs in order to keep us on board?" In the account, Velkulesku is said to have remarked "This is going to be a disaster."

Yanis Varoufakis, the former Greek Minister of Finance who reigned over the bailout deal, wrote in Der Spiegem: "Ever since the first Greek 'bailout' program was signed, in May 2010, the IMF has been violating its own 'primary directive': the obligation not to fund insolvent governments. As a result, the IMF's leadership has been facing a revolt from its staff members who demand an exit strategy arguing that, if the EU continues to obstruct the debt relief necessary to restore the solvency of the Greek government, the IMF should leave the Greek program.

"Five years on, this IMF-EU impasse continues, causing a one-third collapse of Greek GDP and fueling hopelessness to a degree that has made real reform harder than ever."

Proof that the troika = a rogue cabal of incompetent unaccountable apparatchiks Must be disbanded for Europe's sake https://t.co/u23Ek5jtkz

"Back in February 2015, when I first met Poul Thomsen (the IMF's European chief) in a Paris hotel, a fortnight after assuming Greece's finance ministry, he appeared even keener than I was to press for a debt write off: 'At a minimum', he told me ' US$61 billion of Greece's debt left over from the first 'bailout' should be written off immediately in exchange for serious reforms.' "

Speaking today in response to the WikiLeaks revelations regarding the Greek debt situation Gianni Pittella, president of the S&D Group in the Europan Parliament said:

"If the recent news on the International Monetary Fund leak is confirmed, this would again call into question the credibility and authority of the IMF, which under no circumstances should give the impression it is acting as a political body, pursuing political goals. We do expect an official denial from the IMF.

"The European Commission and the Greek authorities have paved the way for an agreement on the review and we urge the IMF not to create unjustified obstacles to it. An agreement on reasonable fiscal targets must be found as soon as possible," Pitella said.