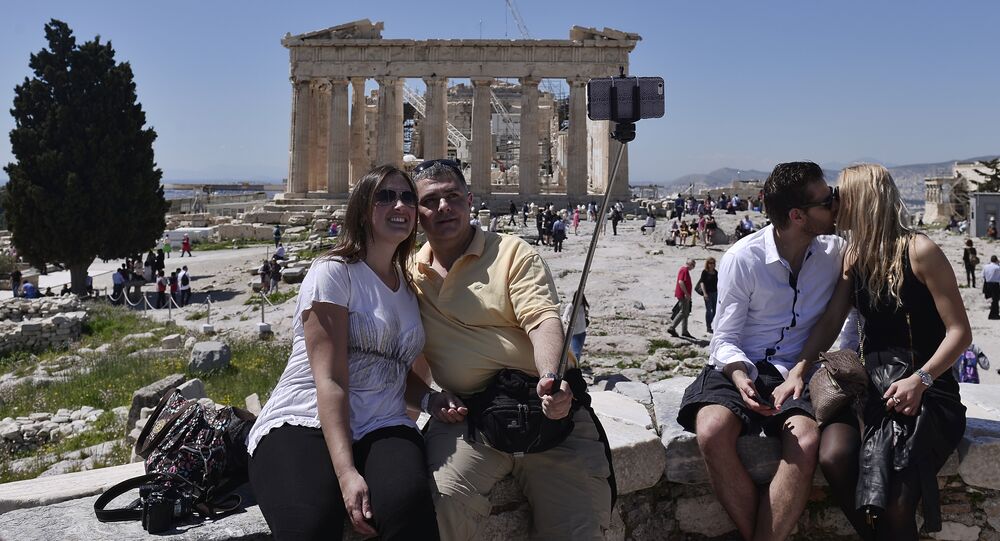 Come One, Come All! Greece Banking on Russian Tourists This Vacation Season

Greece hopes to replace Turkey as a major destination for Russian tourists this coming season with pilgrimage tours, visits to wineries and historical sites, the country’s Minister of Tourism Elena Kountoura said in an interview with Gazeta.ru.

© Sputnik / Vladimir Vyatkin
Worse Than Expected: Turkish Tourism in Tatters Due to Security Concerns
When asked if she expected more Russian tourists to come to Greece now that Egypt and Turkey are virtually closed to Russian vacationers, Elena Kountoura said that her ministry’s new policy had already resulted in a record increase in the number of foreign tourists visiting the country.

“We had around a million Russian tourists coming in each year over the past few years. The figure was a bit less last year but we expect a 20 percent growth this year,” she said.

Greece has traditionally been considered an ideal place to spend the summer. The weather in December, January and February is much like what we have here in Russia, and it is exactly with the fall season in mind that Greek tour operators offer a variety of medicinal, health-building and spa resorts.

To make sure that tourists keep coming over all year round the Greek companies are promoting agro-, gastronomical and wine tourism, which is particularly popular in Russia. We also offer all kinds of sea cruises and yachting and scuba diving programs.

“Family tourism is also very popular in Russia, just like medicinal and health-building ones,” the Minister said.

When asked if the high cost of vacationing in Greece, compared to what was traditionally offed by Egypt and Turkey, Elena Kountoura said that even though Greece was an EU country, the prices there are pretty affordable.

“Instead of jacking up prices just like many non-EU countries are doing now, Greek tour companies offer very good prices and financially attractive package deals too,” she added.

When asked about the number of Greek tourists coming to Russia, Elena Kountoura said that despite the economic downturn of the past few years 7 percent more Greek tourists visited Russia in 2015.

Unlike Egypt and Turkey, Russians need a visa to visit Greece. When asked if Russians travelers were turned off by this the Minister said that there were 28 Greek visa centers currently at work in Moscow, St. Petersburg, Kazan, Samara, Nizhny Novgorod and other cities across Russia.

“We already have increased our staff to speed up the visa process. Besides, we have service desks available at banks and we are now setting up six mobile biometric centers elsewhere in Russia,” Elena Kountoura said.