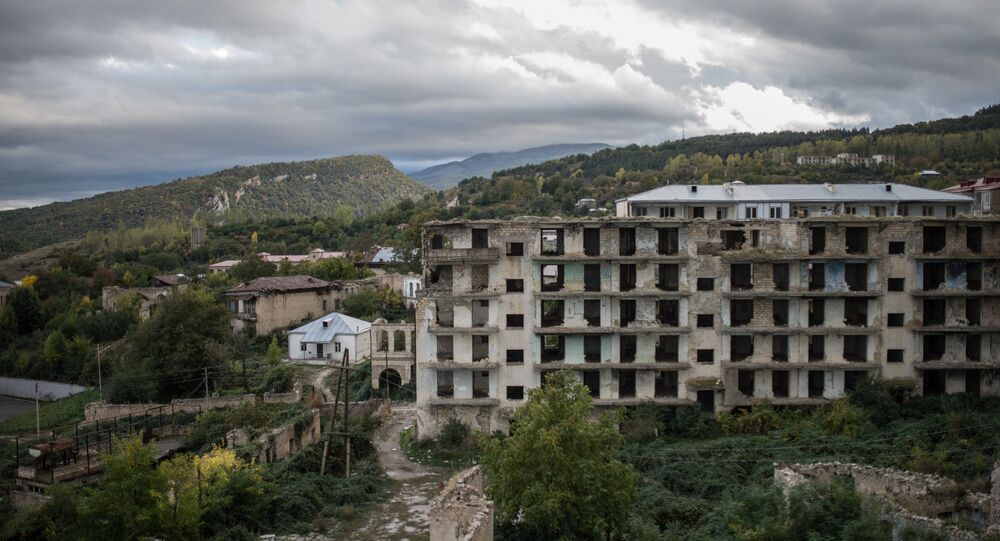 On April 2, Armenia and Azerbaijan declared a dramatic escalation of the situation in the Nagorno-Karabakh region. Baku and Yerevan traded blame for breaching the truce in the conflict and reported heavy fighting in the area.

The conflict has its origins in the early 20th century, although the present conflict began in 1988. The region sough to secede from the Azerbaijan Soviet Socialist Republic, before proclaiming independence after the USSR collapsed in 1991. As the war progressed, both post-Soviet republics entangled themselves into a protracted war.

The enclave of Nagorno-Karabakh is a historic region in the Lesser Caucasus range, in Azerbaijan. The majority of its population is Armenians. As of January 2013, the population was 146,600 people.

© Sputnik / Iliya Pitalev
Twelve Azerbaijani Soldiers Killed in Nagorno-Karabakh Clashes
According to Armenian and Azerbaijani sources, there are different views of the history of the region. According to Armenia, in the beginning of the 1st millennium BC, Nagorno-Karabakh (the Armenian name – Artsakh) was under political and cultural influence of Assyria and Urartu. It was first mentioned in inscriptions of Sardur II, King of Urartu (763-734 BC).

In the early Middle Ages, Nagorno-Karabakh was part of Armenia, according to Armenian sources. Then, the majority of the country was occupied by Turkey and Persia. At the same time, Armenian princedoms (Melikdoms) in the region were partially independent. In the 17-18th centuries Artsakh princes spearheaded the fight for independence against Persia and Turkey.

© Sputnik / Ilya Pitalev
The town of Stepanakert in the self-proclaimed Nagorno-Karabakh Republic.

According to Azerbaijani sources, Nagorno-Karabakh is one of the Azerbaijan’s ancient regions. The official version says that the name "Karabakh" originates from the 7th century and means the "black garden" in Azerbaijani. In the 16th century Karabakh was part of the Safavid Empire, and then became the independent Karabakh Khanate.

In 1813, Nagorno-Karabakh became part of the Russian Empire.

© Sputnik / Iliya Pitalev
Moscow Hopes Situation in Nagorno-Karabakh to Normalize Amid OSCE Call for Peace (VIDEO)
On February 20, 1988, at an emergency session of the regional deputies' council adopted appeals to the Supreme Councils of the Azerbaijan and Armenia, asking them to authorize the secession of Nagorno-Karabakh from Azerbaijan to Armenia.

The Soviet government and Baku rejected the appeal which provoked protests among Armenians in Nagorno-Karabakh and Yerevan.

On September 2, 1991, a joint session in Nagorno-Karabakh declared the creation of the Nagorno-Karabakh Republic. On December 10, 1991, several days before the USSR collapsed, a referendum was held in the region and 99.89 percent voted for full independence of Nagorno-Karabakh from Azerbaijan.

© Sputnik / Iliya Pitalev
OSCE Minsk Group to Discuss Nagorno-Karabakh Escalated Tensions on April 5 - Official
Baku designated the plebiscite as illegal and abolished the autonomy of the region. Shortly after, a military conflict erupted in which Azerbaijan tried to keep the region as its part while Armenian units fought for independence, backed by Yerevan and the Armenian diaspora from other countries.

According to different estimates, both sides to the conflict lost up to 25,000 people killed. Another 25,000 were injured. Hundreds of thousands of people were displaced. Over 4,000 people were unaccounted for.

As a result, Azerbaijan partially lost control over Nagorno-Karabakh and fully or partially over its neighboring areas.

On May 5, 1994, representatives of Armenia, Azerbaijan as well as the Armenian and Azerbaijani communities of Nagorno-Karabakh, brokered by Russia and Kyrgyzstan, signed a protocol, urging to cease fire on May 9. This document has been known as the Bishkek Protocol. It came into effect on May 12, 1994.

The negotiating process began in 1991. Since 1992, peace talks have been held within the Minsk Group of the OSCE to settle the crisis. The Minsk group is co-headed by the US, France and Russia. It also comprises Armenia, Azerbaijan, Belarus, Germany, Italy, Sweden, Finland and Turkey.

Since 1999, regular bilateral and trilateral meetings have been held between the leaders of Armenia and Azerbaijan. The first meeting between Ilham Aliyev and Serzh Sargsyan took place on December 19, 2015 in Bern, Switzerland.

Despite the talks being confidential, it is known that they are based on the so-called Madrid principles passed by the Minsk group to the sides of the conflict on January 15, 2010. For the first time, they were presented on November 2007 in the Spanish capital.

© AP Photo / Dmitry Lovetsky
Moscow in Constant Contact With Armenia, Azerbaijan Amid Nagorno-Karabakh Tensions
Azerbaijan has insisted on preserving its territorial integrity. Armenia has supported the interests of the self-proclaimed region, because the Nagorno-Karabakh Republic is not a party to the talks.

In 2015, political dialogue in the region was hampered, after tensions grew and the number of victims, especially among civilians, rose.

An Azerbaijani source close to the situation told Gazeta.ru that the current clashes in the region are different. Border skirmishes have been usual for Nagorno-Karabakh despite the ceasefire. According the source, now the clashes are large-scale, and a state of emergency has been declared in Azerbaijani security services.

Analysts made several assumptions on what could have fueled the escalation in the region.

First of all, the tensions in Nagorno-Karabakh may have been fueled by Azerbaijan, after the row escalated between Moscow and Ankara. The spat broke out after a Turkish jet downed a Russian Su-24 bomber involved in the military operation in Syria.

"Turkey is the closest ally of Azerbaijan. Their relations have grown stronger after ties between Moscow and Ankara deteriorated. The normalization between Russia and Turkey would not be in the interests of Baku," Viktor Nadein-Raevskiy, a senior fellow at the Russian Academy of Sciences, said.

According to him, there are still no signs of a thaw between Moscow and Ankara, but Baku may have taken into account the latest developments over the Turkish-Russian row.

© Sputnik / Iliya Pitalev
Russian Defense Minister Calls for De-escalating Nagorno-Karabakh Tensions
Last week, the Turkish government signaled that Ankara was ready to normalize ties with Russia. During his visit to the US, President Recep Tayyip Erdogan said relations between Moscow and Ankara should be restored. On the same day, Turkish media reported that the militant suspected of killing Oleg Peshkov, the pilot of the downed Russian jet, was arrested.

At the same time, Sergei Minasyan, a political analyst at the Yerevan-based Institute for Caucasus, underscored that further escalation of the conflict would only harm the interests of Baku which needs money from the West.

"Azerbaijan doesn’t want Nagorno-Karabakh to be independent. The current escalation may be provoked by Turkey’s growing role in the Syrian conflict. In this situation, Baku may have decided to expand its influence in the region," historian Vladimir Stupishin told RT.