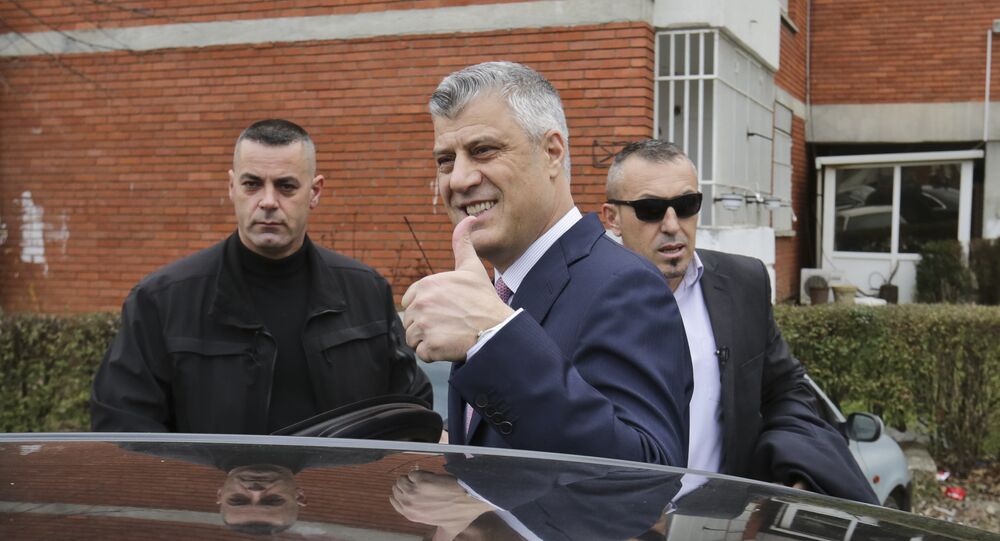 The leak of a secret BND dossier on Hachim Thaci which reports that the newly-elected Kosovan President had links to a contract killer and was involved in the trafficking of people, arms and drugs is more confirmation that Western politicians have chosen to support Thaci in the knowledge of his criminal past.

The dossier reports that Thaci, who has recently been elected president of Kosovo, was one of the leaders of organized crime in Kosovo, and part of an international criminal network with involvement in contract killings and the trafficking of people, arms and drugs.

"Kosovo is a center of organized crime that supervises criminal activity across Europe," the BDN reports.

"Kosovo is divided into three zones of interest of organized crime – Drenica, Dukagjini (Metohija) and the north-eastern part of Kosovo around the river Lab, which are controlled by former KLA leaders. They are closely linked with the local government and Albanian politicians who also have influence in southern areas of Serbia and Macedonia."

"The Drenica region is controlled by the so-called Drenica group organized around Thaci Hashim, Haliti Xhavit and Selimi Rexhep. This group works closely with organized crime structures in Albania, Macedonia, Bulgaria and the Czech Republic," the BND wrote.

The dossier reports that Hashim's Drenica group of criminals established their own security forces, with the direct support of the Czech and Albanian mafia in the Czech Republic.

"SHIK came into being in its current form in the second half of 1999 in Pristina at the initiative of Thaci … the service engages in spying, intimidation and elimination of democratic forces (via professional killers), particularly the opponents of organized crime. There are well-organized SHIK branches in the Albanian diaspora," the BND writes, and goes on to name the leaders of the SHIK network in Germany.

The BND reveals that the Kosovan President-elect is suspected to have given orders to a contract killer called Bekimi, and has links to money laundering, fuel and cigarette smuggling through the Salbatring company in Pristina.

According to the agency's intelligence from 2003, he was involved with wide-scale arms and drugs smuggling through a criminal network in Hamburg.

"One of the biggest financiers of Thaci and the KLA during the war in Kosovo in 1999 and the war in Macedonia was a group of organized criminals centered around Mehmeti Nazar, who lives in Dallas, Texas," the BND wrote.

Another of Thaci's backers is Ekrem Lluka, who is a "known smuggler of all kinds of goods: weapons, cigarettes, fuel, trucks and appliances" and suspected of involvement in the financing of Islamic terrorist groups.

​The existence of the decade-old BND dossier on Thaci is further evidence that western governments have supported Thaci's government of Kosovo, in which he has twice served as Prime Minister, in full knowledge of his links to organized crime.

Thaci, who is currently Kosovo's Foreign Minister, is due to be inaugurated as president of Kosovo on April 7 after a majority of Kosovo's parliament voted for his election. Among those who congratulated him on the election were the German ambassador Angelika Viets, and her counterparts from the US, UK, France and Italy.