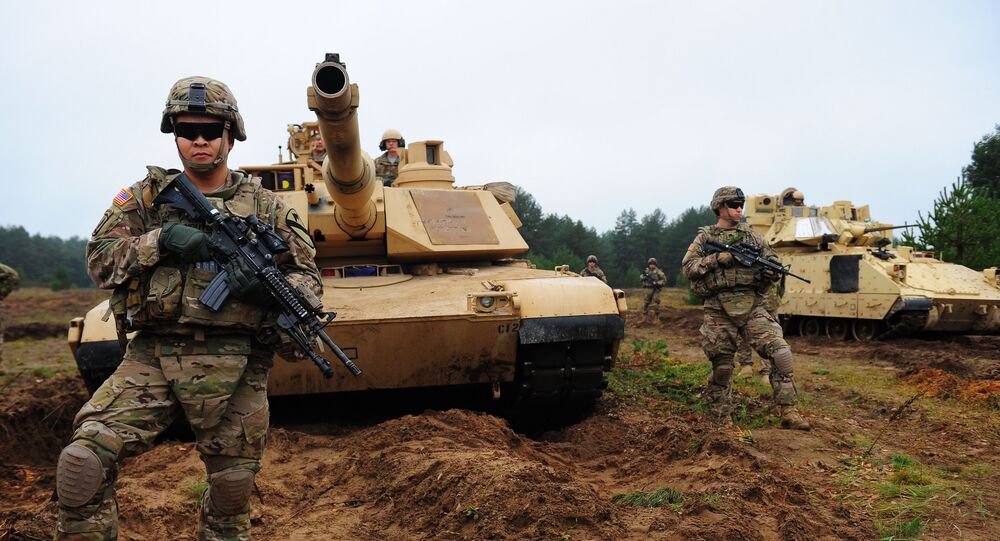 Russia will not passively watch the US and NATO build-up in Europe and will provide an asymmetrical response, which will be highly efficient, not elaborately expensive and calibrated in accordance with Russia’s understanding of the extent of the military threat, Russian envoy to NATO Alexander Grushko said on Wednesday.

© AFP 2020 / PETRAS MALUKAS
Looking Past Obama: Pentagon to Boost Military Presence in Europe
The comments come in response to the recent Pentagon announcement that it is readying a more robust US military presence in Eastern Europe.

“The new gear includes 250 tanks, Bradley Fighting Vehicles and Paladin self-propelled howitzers as well as more than 1,700 additional wheeled vehicles and trucks,” according to The Wall Street Journal report.

The White House approved the “broad contours” of the plan, designed to start in February 2017, when it signed off on the $3.4 billion European Reassurance Initiative budget last month, leaving the specifics to the Pentagon.

Congress still has to sign off on the request.

“By no means, are we passive observers,” Grushko said in an interview with Russia-24 news channel.

© AP Photo / Alik Keplicz
NATO's Containment Policy Threatens Russian Interests - Envoy
“We will utilize all military measures we deem necessary in order to counterbalance this reinforced presence which, by the way, has no justification whatsoever.”

“There will be an asymmetrical response, which will be highly efficient, not extremely expensive and calibrated in accordance with Russia’s understanding of the extent of the military threat,” he added.

Grushko noted that NATO is already sounding the alarm over Russia’s strengthening of its potential on the so-called “anti-access/area denial” capabilities, which now cover the Kaliningrad region, Black Sea and Kola Peninsula in the far northwest of Russia and over Russia’s defensive measures of its air group in Syria after Turkey downed its jet in Syria.

Russia’s envoy has also addressed reports of Air Force Gen. Philip M. Breedlove’s suggestion to resume surveillance flights of U-2 jets over Europe, presumably on the borders of the Baltic states.

© Sputnik / Sergey Krivosheyev
Russia’s Deployment on the Kurils Signals Severe Limitations for US 'Pivot to Asia'
Breedlove apparently suggested that “EUCOM needs additional intelligence collection platforms, such as the U-2 or the RC-135, to assist the increased collection requirements in the theatre.”

Grushko has not ruled out that such jets could be used over regions bordering Russia, however said that he sees undertones of propaganda in the reports rather than a real threat.

“It seems to me that these [reports on the potential resumption of flights by US reconnaissance planes] are nothing more than another propaganda volley, but made with a certain intent,” he said.

“Reconnaissance aircraft will not fly over Russia,” he stated.