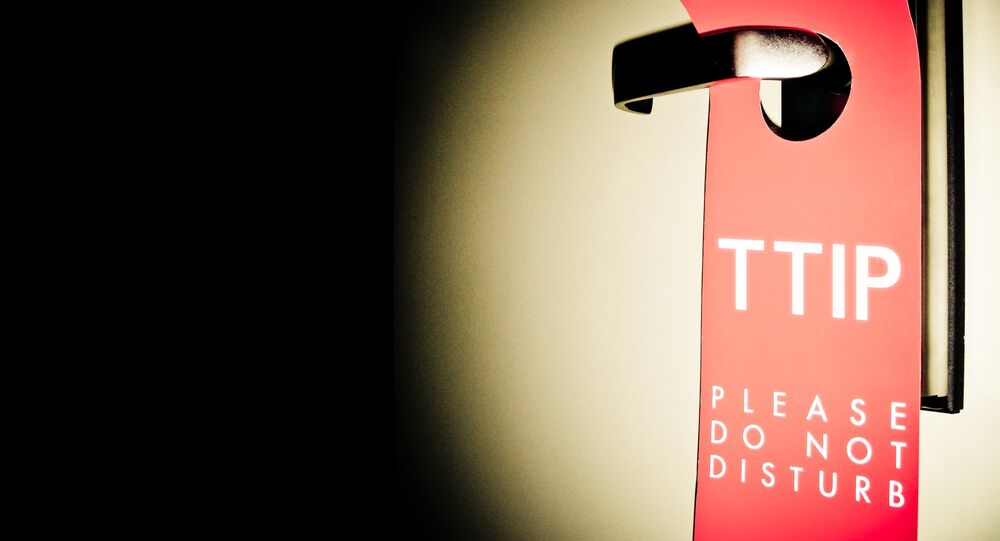 The Transatlantic Trade Investment Partnership (TTIP) between the European Union and the United States could boost support for a Brexit but leave the UK exposed to "problematic" deals. Politics and EU trade expert Gabriel Siles-Brugge suggests that the argument for leaving the EU to avoid the worst aspects of the TTIP deal may be counterproductive.

Brugge says Britain leaving the European Union will not free the UK from its ties with the Transatlantic Trade Investment Partnership (TTIP) but rather lead to an "even more problematic UK-US agreement."

In a blog for the London School of Economics, Brugge writes:

"The problem is that leaving the EU, even if it occurs before the conclusion and ratification of TTIP, will likely not spare Britain from most its potential negative effects."

Some of those negative potential effects, according to campaign group Global Justice Now, include: compromises on food safety allowing chemically washed chickens and beef pumped with hormones into the European market for consumption; farmers and consumers would have fewer rights; huge corporations would be allowed greater influence on law making and new chemicals and pesticides would be allowed to be used on animals and crops which could be detrimental.

Why #Brexit is a bad idea if you want to avoid the effects of #TTIP https://t.co/tUO1aWmI50 #noTTIP #stopTTIP

However, most controversial of all, would be the creation of a supranational court called the Investor State Dispute Settlement (ISDS) which would allow global corporations to sue governments if EU legislation damages their business from making a profit.

The biggest fear among anti-TTIP campaigners in the UK is that private US healthcare firms interested in buying parts of Britain's NHS would be able to take their case to the ISDS and claims millions of money in compensation for loss of business.

A senior Labour economic adviser recently suggested that Britain would be better off outside of the European Union, if the free trade deal with the US is signed off by the EU.

Joseph Stiglitz, a Nobel Prize winner said that if the Transatlantic Trade and Investment Partnership (TTIP) between the EU and US is anything like the Trans-Pacific Partnership (TTP) trade deal between the US and pacific countries, then no democratic government should pledge its support for it.

Leaders of the UK's major political parties have signed an appeal to ban the TTIP from allowing US corporations to take over parts of the NHS.

UK Prime Minister David Cameron continues to defend the deal and says: "The opportunities for Britain of trading more with the United States of America are clear".

The controversial trade deal between the US and Europe is expected to be signed off by the end of the year amid widespread global opposition. However, Britain's future membership of the EU will be determined much earlier in June 2016.