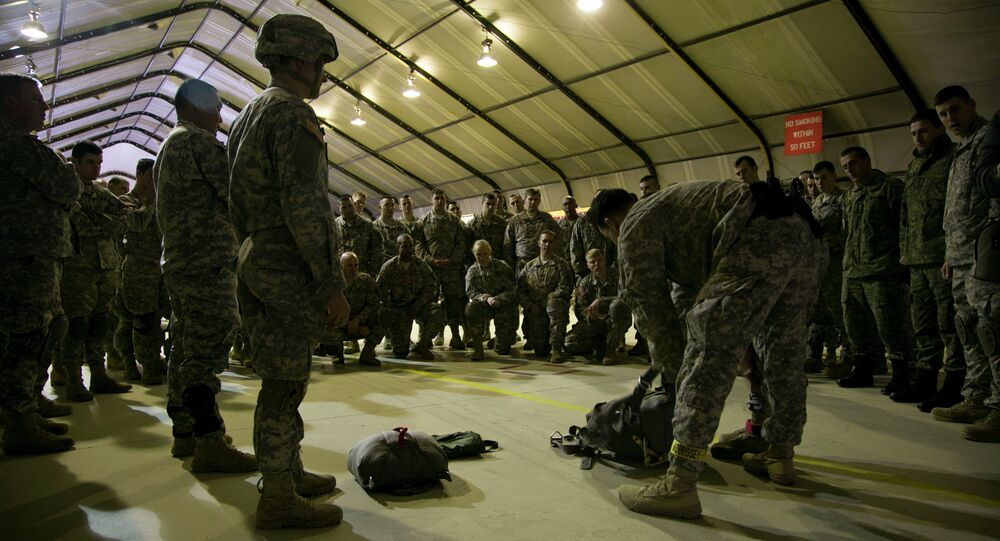 Sputnik correspondent Brankica Ristic visited Camp Bondsteel, the main base of the US Army in Serbia under the command of the NATO-led Kosovo Force (KFOR) mission. Here are some interesting facts Ristic found out about the second largest US military base in Europe.

Camp Bondsteel was built in Kosovo after the bombing of Serbia when the region fell under the control of the international peacekeeping mission.

The camp occupies 3.8 km² of land and is built mainly of wooden semi-permanent huts. Around 25 kilometers of paved roads connect all the camp's 300 objects and 11 watchtowers.

Many ethnic Albanians, who make up the population of nearby communities, are employed in the camp doing various low-skilled jobs. They're getting paid between €400 and €800, which by local standards is a lot of money. In the past as many as 2,500 local residents worked in the camp, but now there are around a hundred of them.

The number of military personnel at the camp is classified. But Ristic found out that 600,000 gallons of water are delivered to the camp daily. Furthermore, over 1,400 baskets with linen are washed every day and 18,000 sets of dishes are prepared. Besides US soldiers involved in the KFOR mission, military personnel from a dozen other countries, including Poland, the Czech Republic, Turkey, Romania, Slovenia and Ukraine, are also present Bondsteel.

Officially, the number of tanks and military helicopters is not disclosed, but according to some reports there are some 20 Black Hawks, one Apache and a dozen M1A2 Abrams tanks.

Every day at 2 PM the alarm goes off across the whole camp. Ristic was told that it's done to train personnel to act properly during natural disasters, which seemed to confuse the Serbian correspondent.

Personnel rotation happens every three to six months, depending on the security situation. Although it's not officially confirmed, soldiers serving at Bondsteel are paid $3,000 plus a 40 percent compensation for "the risk of war danger in Kosovo," Ristic said. Like in all other US military camps, personnel are forbidden to drink, have sex and carry loaded guns.

The administration at Bondsteel tries to ensure soldiers don't get homesick and keeps shops in which personnel could buy clothes and food from the United States. There is also a souvenir shop where one could buy souvenirs from many countries across the world, except Serbia, the author said.

The personnel serving at Bondsteel have an opportunity to attend history lessons on the statehood of Kosovo, as most soldiers have a vague idea where they're actually serving. However, since all teachers at the camp are Albanians, they only tell their version of history. The Serbian perspective is ignored.

The position of the camp makes Bondsteel the US Army's most important military site in Europe. All important locations are in close proximity — the US military contingent in Macedonia and Bosnia, as well as US military bases in Italy.