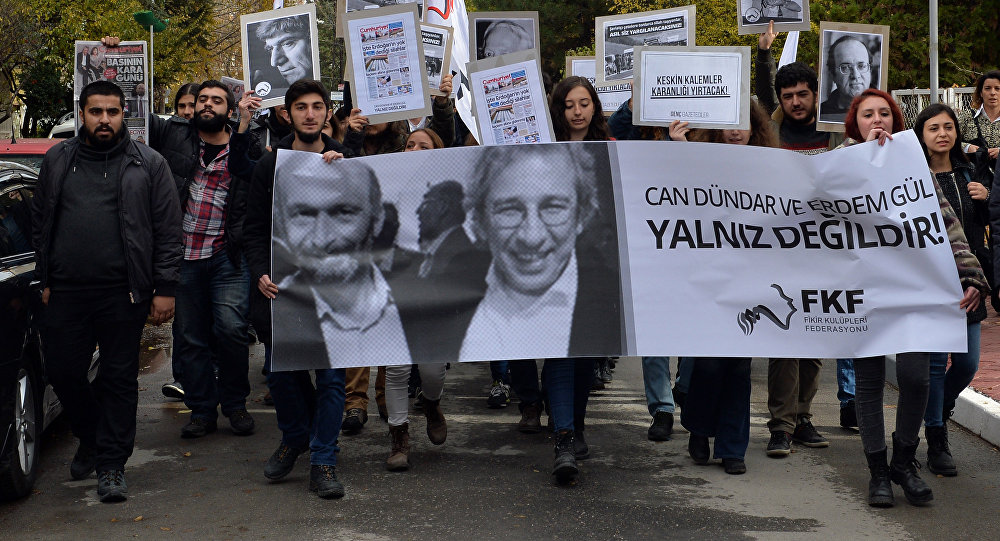 Two prominent journalists are scheduled to go on trial in Turkey on Friday for their investigation revealing alleged state arms supplies for rebels battling government forces in Syria.

MOSCOW (Sputnik) – Can Dundar and Erdem Gul were arrested and placed in pre-trial detention in November 2015 for publishing an incriminating article and footage in the Cumhuriyet daily on May 29. Their investigation concluded that Turkish National Intelligence Organization (MIT) trucks had carried containers with artillery shells, machine gun rounds and mortar shells to Syrian rebels.

Dundar and Gul were freed by the Constitutional Court one month ahead of their trial to Turkish President Recep Tayyip Erdogan’s consternation, who refused to "accept, respect and follow" the ruling.

Turkey's crackdown on journalists and restrictions on freedom of speech has been criticized by the international community, including the United Nations, the United States, the European Union, Russia and the Reporters Without Borders (RSF) organization.

The RSF ranks Turkey 149th out of 180 countries in press freedom.

Turkish Justice Minister Bekir Bozdag revealed earlier this month that the country had opened around 2,000 legal cases for insulting Erdogan in his nearly two-year term.

On Wednesday, the Istanbul Chief Public Prosecutor’s Office assigned Evliya Caliskan as a trial prosecutor in the case, and Lutfi Karaback as the trial prosecutor of the court’s second committee.

Justice Bulent Dalkiran is slated to preside over the committee.