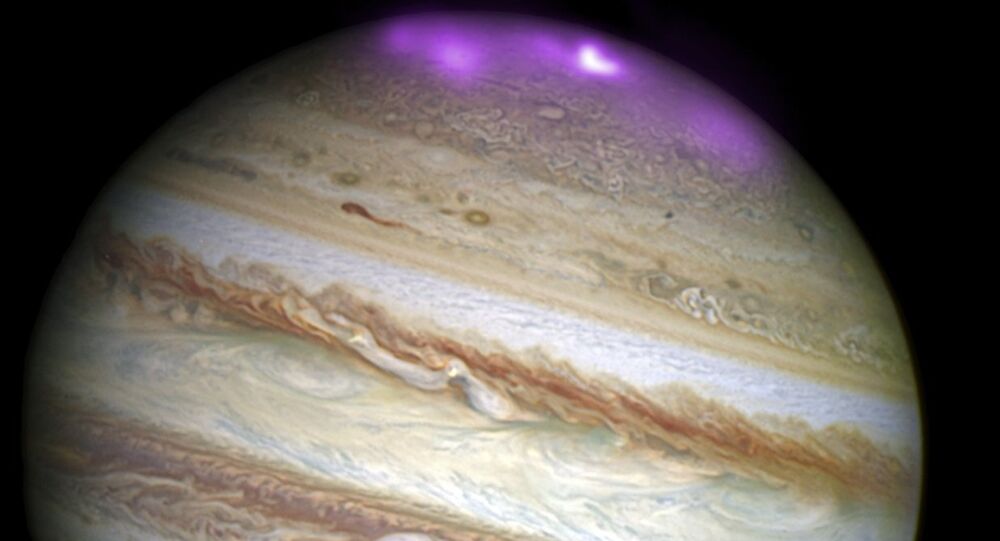 © NASA .
Pluto's Secrets: Space Probe Shines Light on Dwarf Planet's Surface & Moons
The storms can cause a spectacular display of flashes similar to the Northern Lights, unleashing an X-ray-powered aurora eight times brighter than usual — and hundreds of times more powerful than any Earth-generated aurora borealis. It is the first time that the phenomenon has been studied.

The data were collected by NASA's Chandra X-ray Observatory in October 2011, and they are part of a long-term attempt to understand how our solar system's biggest celestial bodies — Jupiter and the Sun itself — interact over time.

The Sun continually ejects flows (or winds) of plasma and other particles into space. Strong winds in particular, can interfere with Jupiter's magnetic field — or magnetosphere. The study found that these collisions are behind Jupiter's high-energy X-ray Northern Lights, which span over an area bigger than the Earth's surface.

"There's a constant power struggle between the solar wind and Jupiter's magnetosphere. We want to understand this interaction and what effect it has on the planet," the study's lead author, UCL's William Dunn, explained in a statement.

"By studying how the aurora changes, we can discover more about the region of space controlled by Jupiter's magnetic field, and if or how this is influenced by the Sun.

"Understanding this relationship is important for the countless magnetic objects across the galaxy, including exoplanets, brown dwarfs and neutron stars," he added.

The research was published Tuesday in the Journal of Geophysical Research, just as NASA's space-probe Juno is about to gather new information on Jupiter's magnetosphere next summer.

The UCL team hopes to combine the new data with available information in order to better understand the process through which the X-rays making up the aurora are formed.

"Comparing new findings from Jupiter with what is already known for Earth will help explain how space weather is driven by the solar wind interacting with Earth's magnetosphere," researcher and professor Graziella Branduardi-Raymont said.