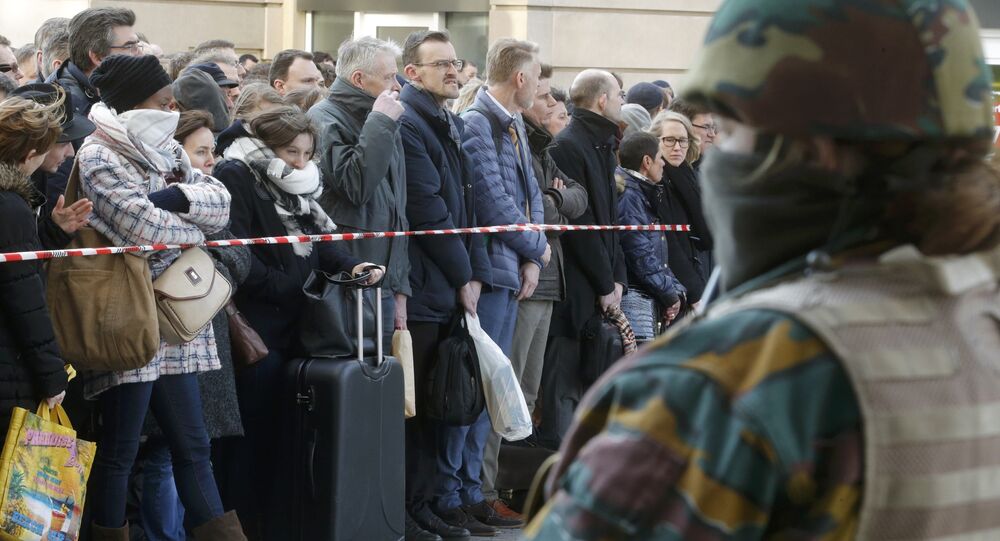 In the wake of the deadly terrorist attacks in Brussels which claimed the lives of 34 people and left 260 wounded, many security experts have come to a very distressing conclusion: the Belgian tragedy was a result of the incompetence and complete failure of the country’s intelligence service.

© AFP 2020 / Seppe KNAPEN
US Military, Intelligence May Help Find Brussels Terrorist Attackers
“In such cases all the law enforcement services are put on high alert: the security of the entire strategic and transport infrastructure is intensified and the major purpose of the intelligence services is to prevent repeated attacks. The second objective is to identify and detain all those involved in masterminding and executing the attack,” Anton Tsvetkov, a Russian security official and the director of the organization Officers of Russia told the Russian media.

However, he said, when the terrorist attack has already happened or even when there is a person walking with a bomb along the street – it already represents a serious failure of the special forces.

The special forces and intelligence service should always be at least one step ahead.

“They [the special forces] should stay a step ahead and reveal and identify terrorists at the initial stage, while they're masterminding an attack. They should set up an agent network and follow up all the contacts,” the security official added.

© REUTERS / Francois Lenoir
Israel Offers Belgium Assistance in Combating Terrorism Amid Attacks
In this respect, he acknowledged, Russian special forces are far ahead of their western colleagues: as the vast majority of terrorist plots have been disrupted at the initial stage.

The expert also suggested why it was Belgium to be targeted by terrorists.

“This is the result of a lack of expertise in the foreign policy of the European Union: the huge refugee influx came as a huge burden to the country’s special forces, who were unable to stay at least one step ahead,” he said.

“When the special forces were working on Salah Abdeslam, they were obliged to check all the connections, groups, and identities of those who could have had any connection to him: their IP addresses, international contacts, etc,” she told Radio Sputnik.

“If upon obtaining the information on his whereabouts they rushed in to arrest him, without first studying the situation, they may have launched some psychological mechanism [prompting others to] carry out several pre-planned terrorist attacks,” she explained.

© AFP 2020 / Seppe KNAPEN
US Military, Intelligence May Help Find Brussels Terrorist Attackers
Legranova cited as an example the usual practice of Russian or Israeli special forces, which analyze, monitor and control “the object” for a long time through their agencies' communications surveillance.

Both experts regretted that the European politicians had taken a non-constructive position in denying their secret services the opportunity to cooperate with their Russian colleagues, something they say put international security at risk.

“The European politicians take an absolutely criminal stance: they do not undertake all the necessary measures to transform the work of their special services,” Legranova said.

© AFP 2020 / KENZO TRIBOUILLARD
Brussels Attacks 'An Attack on All of Europe' – Spanish Columnist
“For example, when there is an opportunity to cooperate and obtain information from some outside sources, the secret services of the US and Israel are simply obliged to cooperate. Russia has more than once provided Europe with information but it was only mocked in response, saying that Russia simply exaggerates threats.”

Russia has a wide spectrum of sources of information as well as the means to control and verify this information, she added. And it is absolutely unwise to ignore any concerns which are voiced by Russia: this could be equaled to a crime against Europe and all Europeans.

Anton Tsvetkov also noted that the Russian President had long ago offered to unite efforts in the fight against terrorism. The expert hopes that Europe will finally think it over and adopt a professional, competent foreign policy and stop putting its residents in the line of fire.