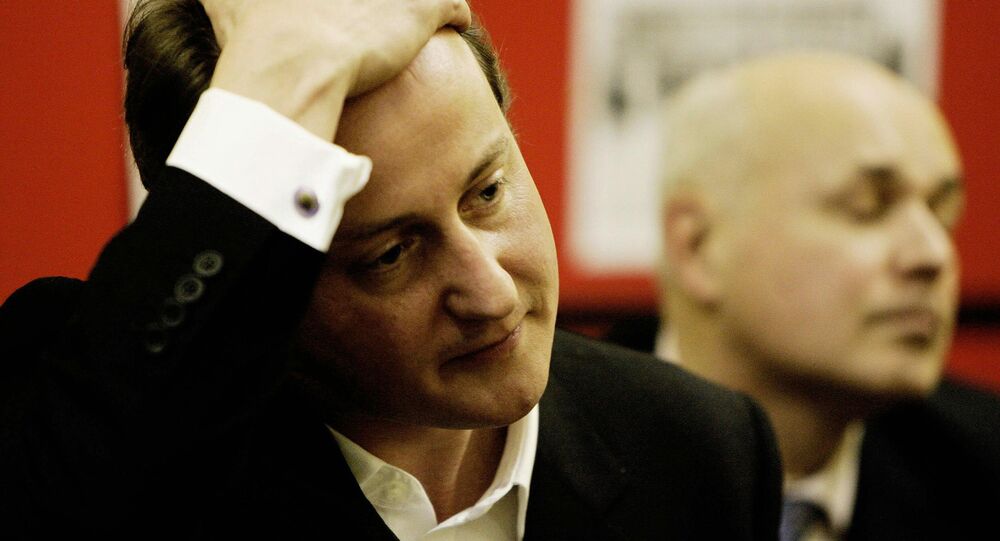 Cameron and his closest ally, Chancellor George Osborne, who have led the Conservative party since 2005, and the country since 2010, have come under heavy criticism following the government's recent budget cuts, with former Work and Pensions Secretary Duncan Smith resigning in protest to what he described as a "deeply unfair" budget.

Following his resignation, Duncan Smith launched an attack on the pair, telling the BBC that the government was "in danger of drifting in a direction that divides society rather than unites it."

"That I think is unfair. I'm not in the business of morality. I simply say that as far as I am concerned the risk is there," he said.

Duncan Smith's concerns were shared by many across all political spectrums, with critics accusing the government of seeking to cut welfare payments to the disabled in order to provide wealthier Brits with tax breaks.

His resignation and subsequent comments triggered a series of outbursts from MPs and party members both critical and in support of the former Work and Pensions Secretary.

And don't start this he's "saying what people are thinking" stance, remember how many times he's defended indefensible cuts. #IDSresignation

© REUTERS / Paul Hackett
Cameron's Tories Embroiled in Civil War as Brexit Debate Turns Personal
While Government officials dismissed the claims that austerity cuts were dividing the nation, others within Cameron's party took aim at the recently announced measures, saying they were unfair and unjust.

Party members have also stepped up their criticism of Cameron, with Senior MP Bernard Jenkin suggesting that the prime minister had been operating like a "dictator" in government.

Jenkin said Cameron and Osborne had "taken the same playbook as Brown and Blair" in regards to operating a top-down, cynical approach to governance.

"Everything is dictated from the top for short-term political advantage. This cannot go on," he told Sky News.

"We need to reset how Whitehall operates. The Prime Minister is supposed to be primus inter pares [first among equals], not a dictator."

© Flickr / IMF
UK Labour Leader Calls on Chancellor Osborne to Resign Over Budget Chaos
The attacks mark a huge crisis for Cameron, who has seen his support within the party plummet after throwing his support behind the campaign to remain in the EU.

If the British public votes to leave the EU, many say Cameron will be forced to resign immediately, while even if the country does remain in the bloc, other critics have suggested that the bad blood and tension created by the Brexit issue will leave the prime minister in a severely undermined position.

While Duncan Smith said that his resignation was not about "about attacking the PM or Europe," many others have questioned the motives behind the former Work and Pensions Secretary's resignation, accusing him of trying to inflict maximum damage on the Cameron, just three months out from the contentious referendum vote.

Baroness Altmann claimed Duncan Smith's decision to resign was "all about Europe," given the former minster's strong support for a Brexit.

Shocked by IDS news. He championed reforms he now says he's resigning over. Sadly seems all about EU referendum

Baroness Altmann (former Labour & LibDem member) owes her title to Cameron, so no surprise she's been wheeled out to attack genuine Tory IDS

Was clear last night my personal view on IDS resignation. Respect others may see differently. Ive said what I believe, won't say more

The recent scandal about budget cuts has also led to calls for Osborne — Cameron's heir apparent — to resign as Chancellor, which would kill off his chances of being the next Conservative party leader.

As fierce fighting continues within the Conservatives, the hugely popular Boris Johnson, who is defying the prime minister and backing a Brexit from the EU, is looming large as a potential replacement for the PM, regardless of whether he wins or loses the EU referendum vote on June 23.