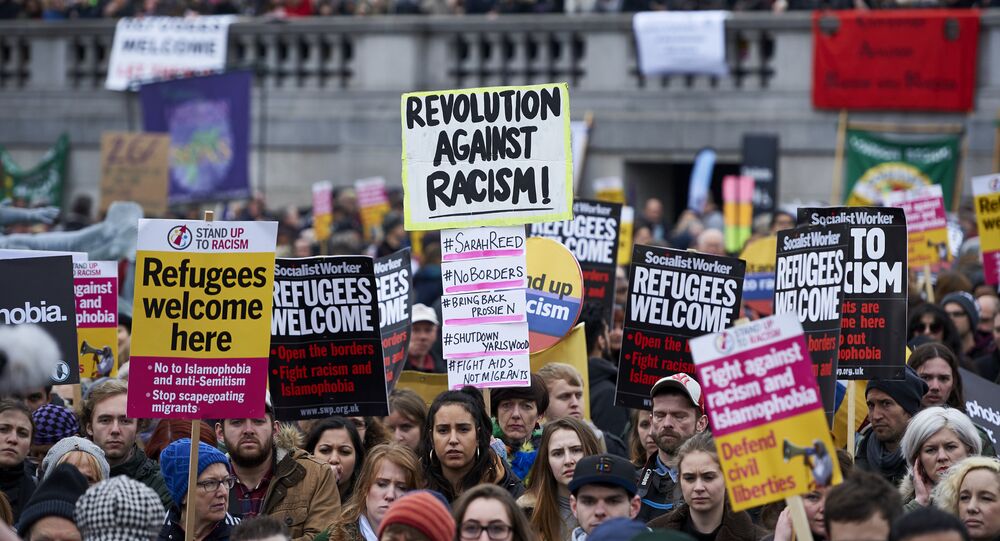 Thousands of anti-racism protesters marched Saturday through the streets of London, Glasgow and Cardiff in a show of support for refugees whose plight has recently become the focus of international attention.

MOSCOW (Sputnik) — The annual demonstrations were timed to the UN Day for the Elimination of Racial Discrimination on Monday. Rallies against racism, fascism, Islamophobia, anti-Semitism and the "scapegoating of migrants" were also held in Dublin, Paris, Vienna, Athens, Amsterdam and other EU capitals.

1,000s of anti-racists came out today in Glasgow to reject racism. Proud to say it loud, #RefugeesWelcome! #M19Scot pic.twitter.com/Y2IoLJ0L3A

​Some 20,000 rallied in London’s Trafalgar Square under the slogan "Refugees Welcome," the event’s organizer Stand Up to Racism said on Twitter.

Further 5,000 gathered in the Scottish capital of Glasgow, according to organizers’ estimates cited by UK national broadcaster BBC. Police put the attendance at 2,000 people.

In Cardiff, Wales, thousands more marched to the City Hall demanding better treatment of refugees after a controversial EU-Turkey deal that would see immigrants fleeing conflict in the Middle East sent back to Turkish camps in return for political concessions.

​Stand Up to Racism urged British citizens to "say yes to diversity" and stand in solidarity with refugees, immigrants and Muslims amid what it referred to as a "racist offensive" launched by some right-wing media and politicians against mostly Muslim refugees arriving in Europe.

Since January 2015, an estimated million refugees have entered Greece from Turkey, most hoping to travel north to seek asylum in Western Europe. A growing number of European countries have been closing their borders, worried at the numbers of migrants entering their territory.