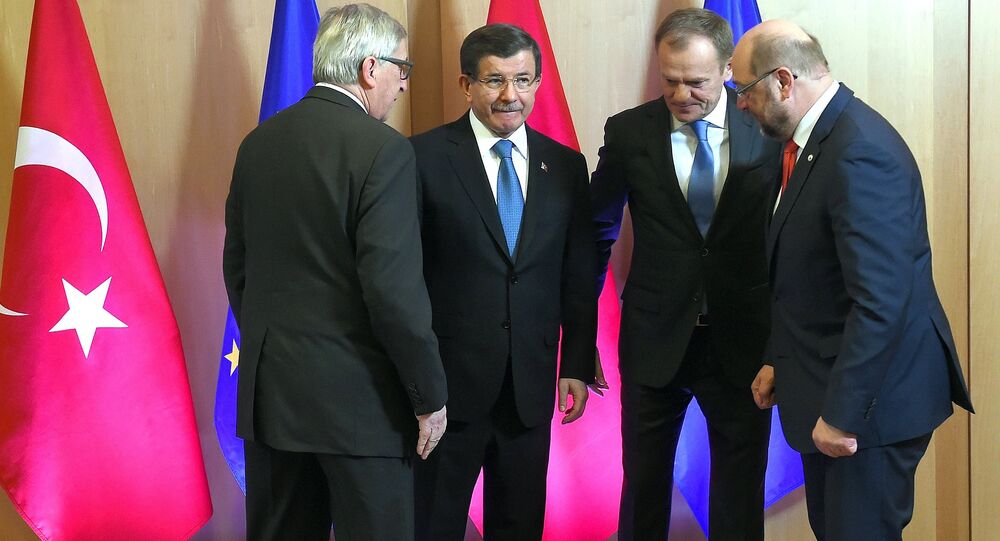 President of the EU Parliament Martin Schulz is pessimistic about the outcome of Thursday's summit between the EU and Turkey, and warned that "no project, including the EU, is irreversible."

© REUTERS / Stoyan Nenov
EU, Ankara to Discuss Additional $6.6Bln to Tackle Migrants - Turkish PM
The President of the EU Parliament is pessimistic about the outcome of the summit on Thursday and Friday between the EU and Turkish representatives, and warns that the meeting is "unlikely to yield a final resolution," Die Welt reported.

"I can imagine that we will make some progress," Martin Schultz said, but criticized what he described as a lack of unity in the European parliament about putting the agreement into force, including the redistribution of 160,000 asylum seekers to Europe from Turkey.

"For this distribution Hungary has to take just 1,294 refugees, but Mr. Orban is holding a referendum and saying it is a German problem," Schultz complained.

"As long as we have to have such debates and unanimous decisions can only be taken by the European Council, it is difficult for me to sound more optimistic."

© AFP 2021 / Bulent Kilic
Eleventh Hour Crisis Talks as EU-Turkey Refugee Deal Set for Failure
"We need a European solution that begins with the causes of migration. If we do not succeed, then Europe could fall apart," he warned.

"The trenches that are opening up could lead to the failure of the EU. No project, including the EU, is irreversible."

The EU Parliament President also had critical words for Ankara, which is seeking EU membership in return for stopping illegal migration across its borders into Europe.

"There is no military solution for the Kurdish problem," and Turkey must respect freedom of the press, he said, adding that the EU is more flexible on other questions like visa liberalization and the opening of new chapters on Turkey's EU accession, Die Welt reported.