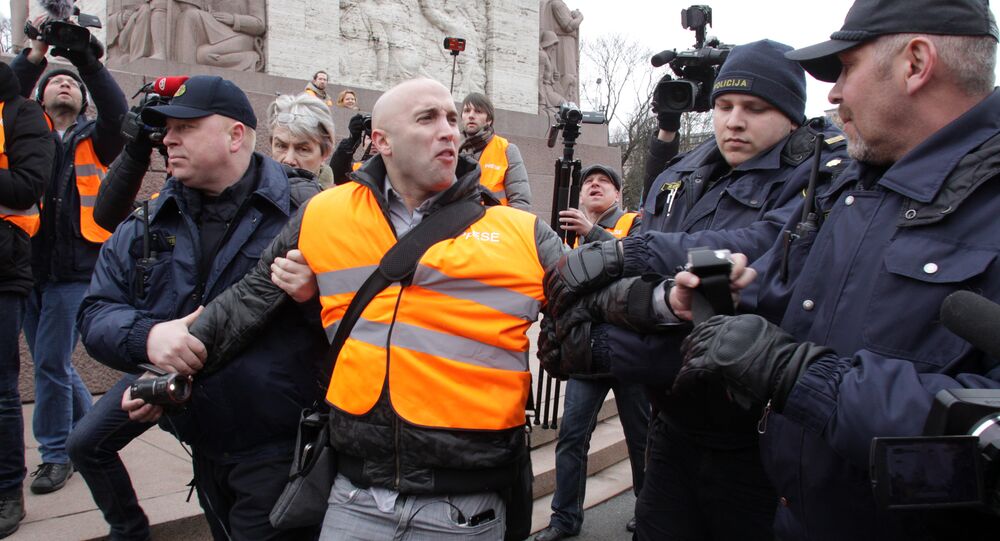 Former RT stringer Graham Philips was arrested at the SS legionaries' annual march in Riga, an increasingly contentious effect criticized by both governments and anti-Nazism activists.

Philips attempted to head the column of Nazi veterans and their supporters, but was taken out of the rally by police and arrested. Phillips, a former RT stringer became an independent journalist during the Donbass conflict, conducting many unique interviews and making rare footage of everyday life among Donbass independence supporters.

"Why are you glorifying fascism?" Philips yelled at the police prior to being arrested.

© Sputnik / Oksana Dzhadan
Latvian Nazi Veterans March in Riga (VIDEO)
The annual parade has become a cause for harsh criticism from a number of international anti-fascist organizations as well as of governments worldwide.

The contentious march is also countered by anti-fascist demonstrators. Famous Nazi hunter Dr. Efrain Zuroff, the head of the Simon Wiesenthal Center’s Jerusalem office, called the march an example of the effort "to rewrite the narrative of World War II and the Holocaust."

The SS, as well as other Nazi organizations, such as Gestapo, SD and SA, were outlawed following the Nuremberg trials.

Latvian Lawmakers to March in Celebration of Country’s Nazi Past