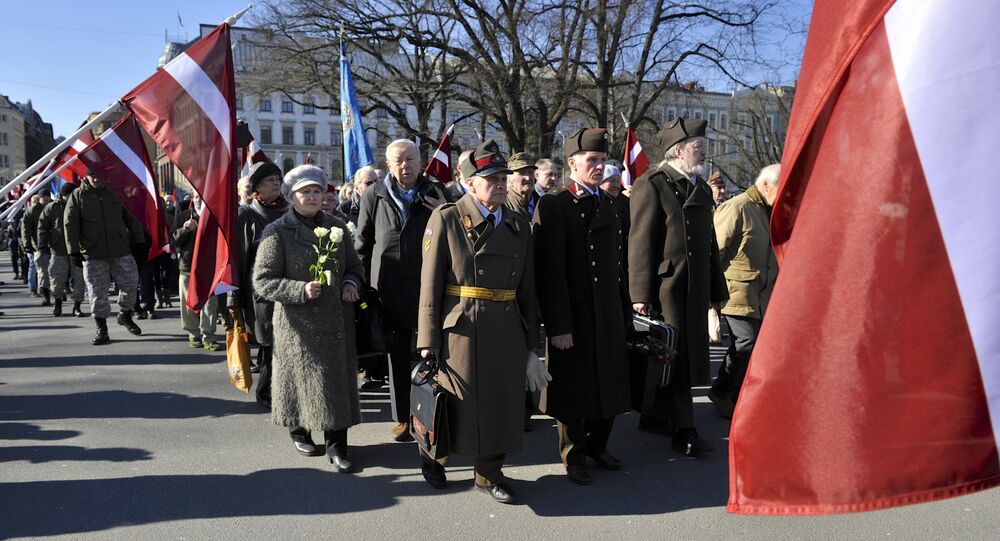 A group of German anti-fascists have been refused permission to take part in a demonstration on Wednesday against a parade commemorating Latvian veterans fighting on the side of Nazi forces, the co-chair of the Latvian Anti-Fascist Committee said Tuesday.

RIGA (Sputnik) – Marches have been held annually in the Latvian capital every March 16 to commemorate Latvian Legion soldiers, allied with the Waffen-SS during World War II, since their inception in 1998.

"A group of anti-fascists from Germany headed to Latvia to take part in the March 16 rally… Five of our colleagues from Berlin were detained today when we met them at the airport," Joseph Koren told reporters.

© Sputnik / Oksana Dzhadan
Latvian Lawmakers to March in Celebration of Country’s Nazi Past
Koren said three groups had sent delegates to take part in the anti-fascist protests, including the Association of Victims of the Nazi Regime, an organization of resistance veterans and Germany’s Anti-Nazi League.

Association of Victims of the Nazi Regime co-chair Cornelia Kerth was not allowed to board the plane bound for Riga, with border officials citing a Latvian Office of Citizenship and Migration Affairs' decision, Koren added. He noted that a similar decision was cited when five activists were detained the following day.

"I do not know yet the grounds for rejection. They are being returned to Germany and prohibited from entering Latvian territory," Koren stressed.

The Latvian Anti-Fascist Committee submitted a request to stage a counter-demonstration to Latvian Legion Day from 07:00 to 13:00 GMT on Wednesday.

The Latvian Legion of the Nazi Germany's Waffen-SS was created in 1943. The unit surrendered in May 1945 together with other Nazi forces.