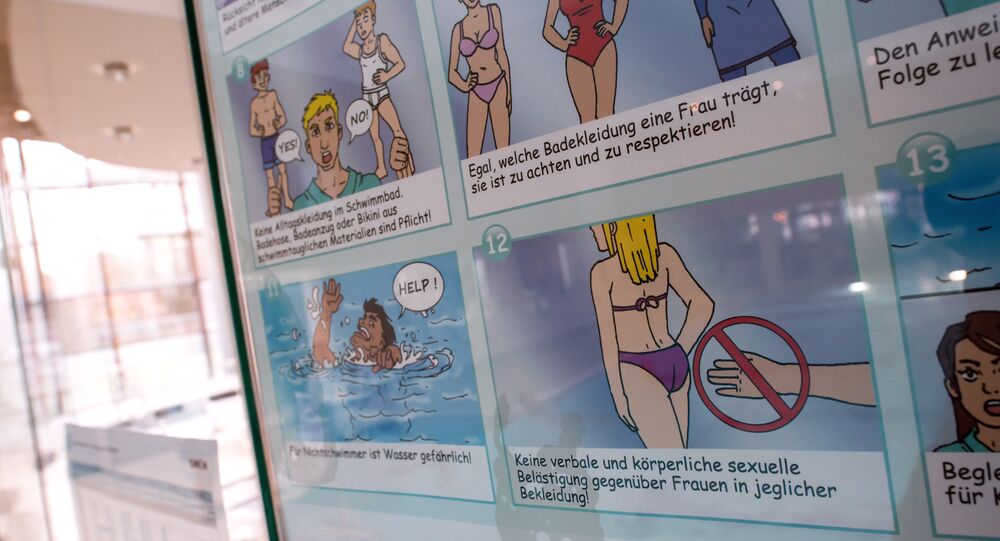 With accusations of rape and other offences mounting against migrants, the German Federal Center for Health Education has launched an online portal to teach refugees about sex and sexuality.

© AFP 2021 / Markus Boehm / dpa
Germany to Deport More Migrants Amid Cologne Sex Assaults
“Zanzu: My Body in Words and Images” provides advice in 13 languages, including English and Russian, on matters pertaining to the emotional, physiological and legal aspects of sexual relationships.

“How to engage in a sexual intercourse for the first time,” “Sex during and after pregnancy,” “How to discuss relationships with a partner,” these are just a few useful tips Zanzu offers. It also contains video instructions on various kinds of sex, including homosexual. These are also available in paper form to those without Internet access.

© Photo : Zanzu
“Zanzu: My Body in Words and Images”, online portal to teach refugees about sex and sexuality

The website warns that sexual violence – including sexual coercion, sexual abuse, and rape – are crimes, and those who commit them “can be severely punished for it.”

The authorities argue that such an educational platform is needed as many of Germany’s million-plus refugees have never received this information.

But the site has provoked a backlash both from the far-right parties, which dismiss it as a waste of taxpayers’ money, and the migrants themselves angered by being viewed as uneducated savages.

Hundreds of women in Cologne were reportedly robbed, threatened and sexually assaulted by small groups of aggressive men, allegedly mostly of Arab and North African origin. Several similar incidents were reported on the same day in Frankfurt, Dusseldorf and Berlin.

Europe is struggling to find a solution to the large refugee crisis, with hundreds of thousands of refugees fleeing conflict-torn countries in the Middle East and North Africa in search of safety and refuge in Europe.