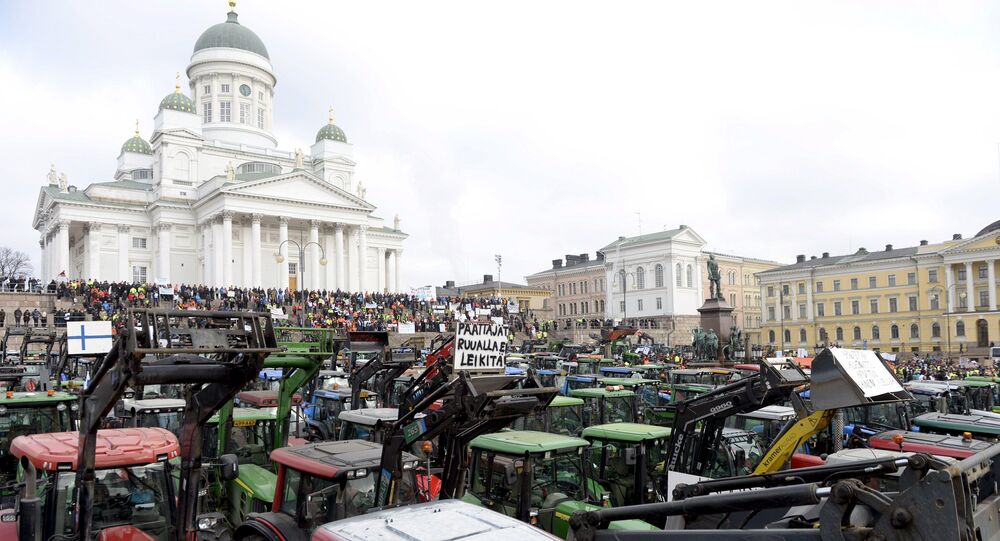 Finnish farmers are holding a large-scale protest on Friday in Helsinki, demanding the authorities to compensate them for losses caused by the Western sanctions against Russia and Moscow's countermeasures, the Yle broadcaster reported citing the local farmers’ union MTK.

MOSCOW (Sputnik) — According to MTK, the anti-Russia sanctions and declining prices have caused "catastrophic" financial distress to farmers in Finland, who are also enduring delays in the receipt of subsidies from the European Union.

MTK expects several thousands farmers with over 500 tractors, who reportedly arrived in the center of the city at 9 a.m. local time (07:00 GMT), to protest in the Finnish capital during the day. The farmers will also hold several rallies in other parts of the country on Friday.

According to the Finnish Natural Resources Institute LUKE, average incomes of agricultural producers in the country dropped by 40 percent or the equivalent of some 10,000 euros per farm in 2015.

The EU economic sanctions against Russia, prolonged several times since their introduction, are due to expire on July 31, 2016.

Anti-Russia Sanctions to Yield No Solution to Savchenko Case – Lawmaker