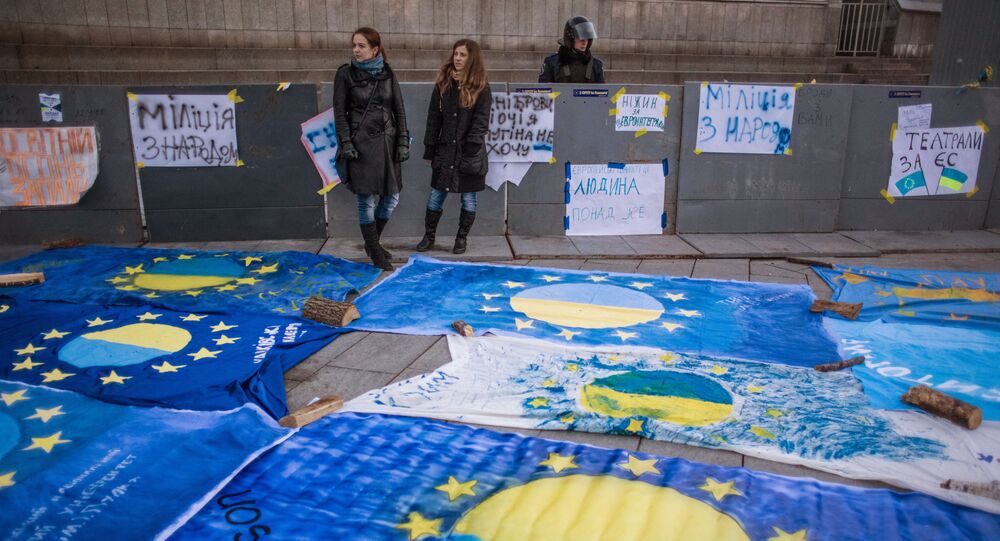 'Big Mistake': Ukraine Was Forced to Choose Between Russia, EU

The words by President of the European Commission Jean-Claude Juncker that Ukraine will not be able to become a member of the EU in the next 20-25 years, has unveiled the truth the West concealed and ignored.

© AFP 2021 / YURIY DYACHYSHYN
Juncker Shatters Kiev's Dreams of EU, NATO Membership Over Next 25 Years
According to an article in Die Zeit, Juncker’s "revelation" came as "out-of-date acknowledgment" by Brussels that Ukraine’s choice between Russia and the EU was a "big mistake."

The author underscored that the majority of German media ignored Juncker’s statement.

Last week, at a press conference in The Hague, Juncker said that "Ukraine will definitely not be able to become a member of the EU in the next 20-25 years, and not of NATO neither."

His remarks poured cold water on the European aspirations of pro-EU Ukrainian elite.

"Juncker unveiled the truth that Brussels concealed and ignored. The truth is that Ukraine in its current state is far from becoming a member to the Western family," journalist Theo Sommer wrote.

© Sputnik / Pyotr Zadorozhnyi
Visa-Free Regime Between EU, Ukraine Depends on Course of Reforms in Kiev - EU Official
"In fact, Ukraine is becoming or maybe has already become a failed state. It is an impoverished kleptocracy ruined by corrupted bureaucrats and oligarchs," he added.

Instead of letting Ukraine remain "neutral" both "the West and Moscow tried to gain it over," the article read.

"Juncker’s 'revelation' is an out-of-date acknowledgment that such an approach was a big mistake," the author wrote. "Economic benefits forced Ukraine to make strategic choice. What is more, Russia’s interests were not taken into account. This was the root of the crisis."

According to the journalist, the West should listen to Juncker’s "wise words" and agree on a compromise over Ukraine, including its integration to the EU and at the same the restoration of its "historic relations" with Russia.

© Sputnik / Eduard Pesov
Will Brussels' 'Big European Lie' Lead to Political Crisis in Kiev?
"This wouldn’t refer to 'Russia’s ambitions.' This would be an attempt to agree Europe’s interests with Moscow," the author concluded.

The sobering truth for the coup-installed Ukrainian government is that "nobody is waiting for Ukraine in the EU, and they never did. Translated from diplomatic language, these 25 years means 'never,'" Moscow-based political analyst Pavel Tarusin told Radio Sputnik.

According to him, despite Brussel’s formal intention to establish institutionalized ties with Kiev the EU does not want to bear the burden of Ukrainian political and financial problems.

Furthermore, countries like Germany or France will never let Kiev be admitted to the bloc because the move will strengthen the positions of the Baltics and Poland who are trying to hamper Brussels’ attempts to normalize ties with Moscow.

"These relations are more important for the European Union than ties with Kiev," Tarusin suggested.

Juncker's remarks came ahead of April's advisory referendum in the Netherlands on Ukraine's association agreement with the European Union. The free trade agreement is expected to provide Ukraine with access to the EU internal market. An EU-Ukraine arrangement on a free trade zone came into effect on January 1. The two sides have agreed to gradually streamline the flow of goods as part of their association deal ratified in March 2014.

Dutch Vote on EU-Ukraine Association Deal Is 'Headache' for Brussels