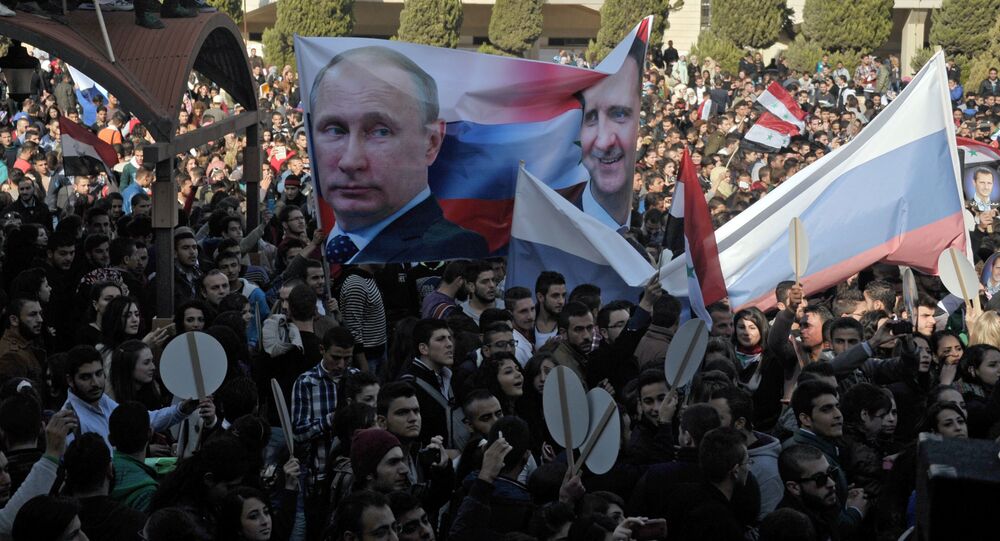 A history teacher in the French town of Sainte-Anne-d'Auray was questioned by police and accused of Islamophobia, after a lesson in which he told students about Russian President Vladimir Putin’s policy regarding the anti-Daesh military campaign in Syria.

© Flickr / Charles Clegg
Europe's Actions Are Increasingly Absurd in the Face of Recent Challenges
Pascal Geneste, a history instructor giving lessons in the Breton language at St. Anna High School, learned that students in his class were also questioned by police, over lessons he gave about Russia and its president.

“In an introductory lesson on geopolitics, which is included in the academic course, I wanted to show Russia as it is,” Geneste told Sputnik. “I’ve spoken about the collapse of communism, about the advent of Vladimir Putin’s rule. I was talking about the policy of Vladimir Putin in the context of his fight against Islamism, against Daesh in particular.”

​Geneste detailed that, in the face of what he sees as the rapid Islamization of France, the Russian contribution in the fight against violent extremism must be understood by French citizens. He added that a coalition between Moscow and Paris, in combatting Islamists, would be a “sensible” one, but noted that the French leadership has opted to continue to cast Putin as an enemy.

“The Paris attacks genuinely shocked France, and my students were not an exception. I think it’s necessary to remind them of threats that go hand in hand with the radicalization of Islam. Doing this, I carry out every teacher’s duty – protecting children and their European freedoms,” he said. “A state of emergency is in place, but rather than fight against Islamists we choose to fight against enemies of Islamists.”

© Sputnik / Iliya Pitalev
NATO Ramps Up Anti-Russian Propaganda Just as Syria Reaches Peace
Following the lesson, the parents of one of Geneste’s students reported the instructor to the local gendarmerie. Geneste was accused of spreading Islamophobic rhetoric and was summoned to appear at a local police department.

“Those parents appeared to be under a certain propagandistic influence at the hands of French television, which has lost its freedom and objectiveness,” Geneste said of the accusations.

The teacher was asked by police whether he was a member of the National Front Party, and was rebuked for uploading onto his personal website a song that is often sung by the party’s youth movement.

“I was asked shocking questions about my political views that apparently violate France’s freedom of speech,” he told Sputnik. “I was asked whether I’m a French nationalist. If love of your own country, of France, of Brittany, of Europe stretching from the Atlantic to the Urals means nationalism, then I’m a ‘nationalist.’”

© AP Photo / Claude Paris
French Crackdown on Islamists May Provoke Future Terrorist Attacks
Law enforcement found no grounds for prosecuting Geneste and released him shortly after his interrogation. His case has been closed. Geneste said he won’t give up his lessons and stressed that nationalism, under certain circumstances, is acceptable.

“I will keep teaching my course, and to encourage my students to want to know more about their history and to know something new about the history of other European states,” he said.

US Has Credible Data on Daesh, Al-Qaeda Plotting Attacks in Europe

US Does Not Recognize Europe's Role in Fight Against Daesh