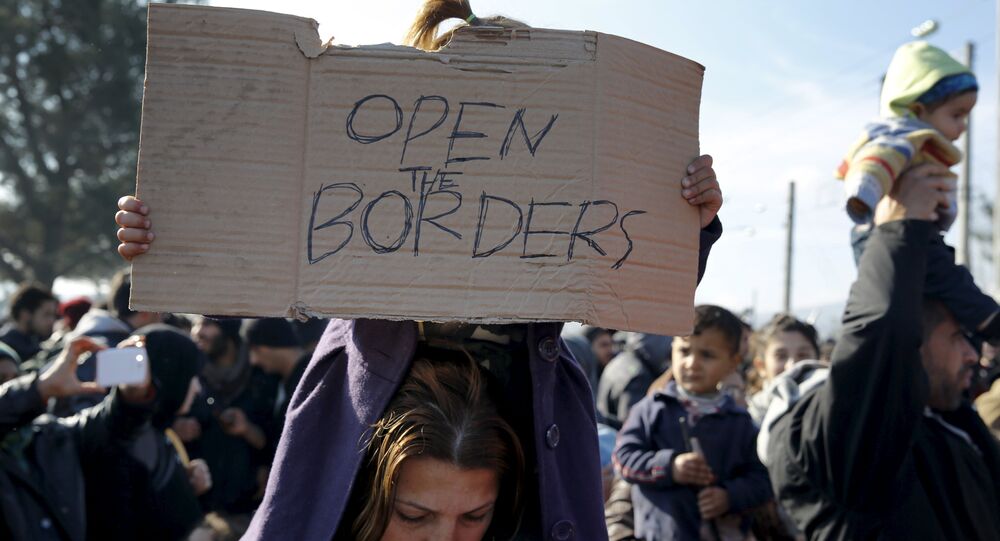 Sending individuals seeking refugee status back to Turkey under the new EU-Turkey plan would result in them being deprived of the opportunity to apply for asylum, a spokesperson with the UN refugee agency (UNHCR) told Sputnik on Wednesday.

© AFP 2021 / Robert Atanasovski
Rights Group: EU Mass Expulsion of Refugees to Turkey May Violate Int'l Law
MOSCOW (Sputnik), Alexander Mosesov — On Monday, a Turkey-EU summit on migration took place in Brussels where Ankara pledged to take back all illegal migrants that arrive in the European Union via its territory and send legal Syrian refugees in their place to the bloc on one-for-one basis in exchange for the acceleration of visa liberalization negotiations and EU accession talks.

"Our main concern is that if you send somebody back to Turkey, that person won't have the possibility to apply for asylum because Turkey, although it signed the 1951 Refugee Convention, it has geographical limitation for people who come from outside Europe. If you are a European citizen, you can apply for asylum, if you are not, you can't," William Spindler said.

© REUTERS / Marko Djurica
Serbia Introduces Stricter Border Control Amid Refugee Crisis
Spindler also said that the Turkish government agreed to give Syrians temporary protection status so they would not be sent back home but noted that they will not be granted refugee status.

"In case of others, for example, Iraqis or Afghans, who are also fleeing from danger and conflict, they cannot apply for refugee status in Turkey," the UNHCR spokesperson said.

Moreover, Spindler said that the status of an individual arriving to the European Union needs be properly assessed instead of them being automatically sent back to Turkey.

"One of the aspects which is particularly worrying for us is the return of all those people who are arriving in Greece from Turkey in any regular way… When people arrive, you can't just say if somebody is a refugee or a migrant just by looking at them. You need to assess the status of the person before you return them. What is proposed [by the EU and Turkey] is the return without this assessment," William Spindler said.

Europe has been beset Spindler by a massive refugee crisis, with hundreds of thousands of undocumented migrants fleeing their home countries in the Middle East and North Africa to escape violence and poverty.

The EU border agency Frontex recorded over 1.83 million illegal border crossings in the European Union in 2015.