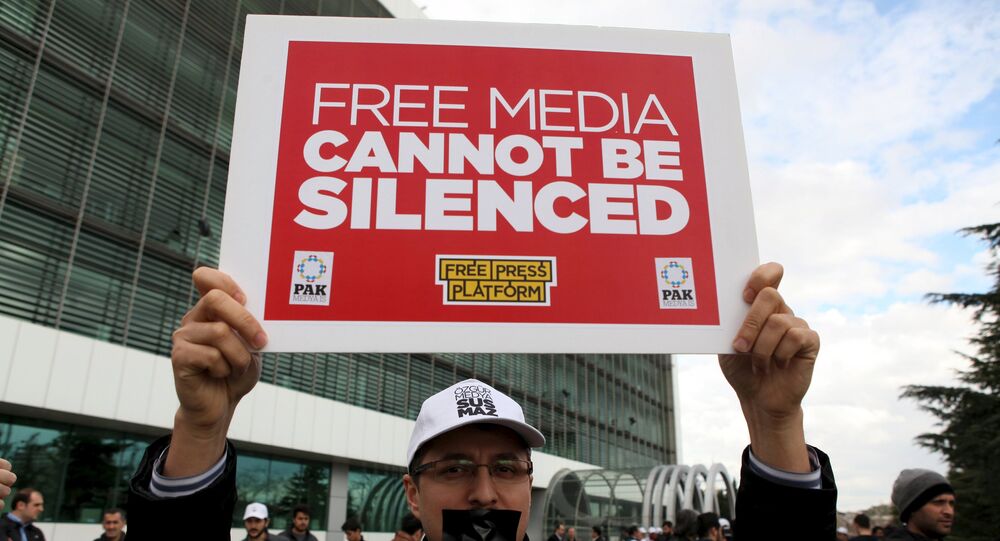 The European Union turns a blind eye to Ankara restricting media freedom in Turkey over the migration crisis issue, a diplomatic source in Brussels said Monday.

BRUSSELS (Sputnik) — On Friday, a Turkish court ordered the Feza Media Group, which includes opposition newspaper Zaman, Today’s Zaman daily and the Cihan news agency, to be placed under the management of government trustees. The move resulted in mass protest in the largest Turkish city of Istanbul. On Saturday, Turkish police used tear gas, water cannons and plastic bullets to disperse the protests.

"Turkey is holding the EU by the throat, Europeans have to turn a blind eye to Ankara's limitations of media freedom in the country," the source said.

© AP Photo / Santi Palacios
Shotgun Wedding: EU-Turkey Summit is Marriage of Desperation
The source underscored that neither President of the European Council Donald Tusk, nor EU foreign policy chief Federica Mogherini commented on the attacks of the Turkish authorities on the Zaman newspaper.

Only European Parliament President Martin Schulz has called the seizure of the Zaman newspaper another attack on the freedom of press in Turkey, saying he intends to raise the press crackdown issue with Turkish Prime Minister Ahmet Davutoglu at the EU-Turkey summit on Monday.

On March 7, Brussels hosts the EU-Turkey joint summit aimed at addressing the issue of migration crisis. In particular, the meeting is expected to focus on measures that will lead to EU member states equitably sharing responsibility for refugees arriving in the bloc and on working out a collective approach to the issue.