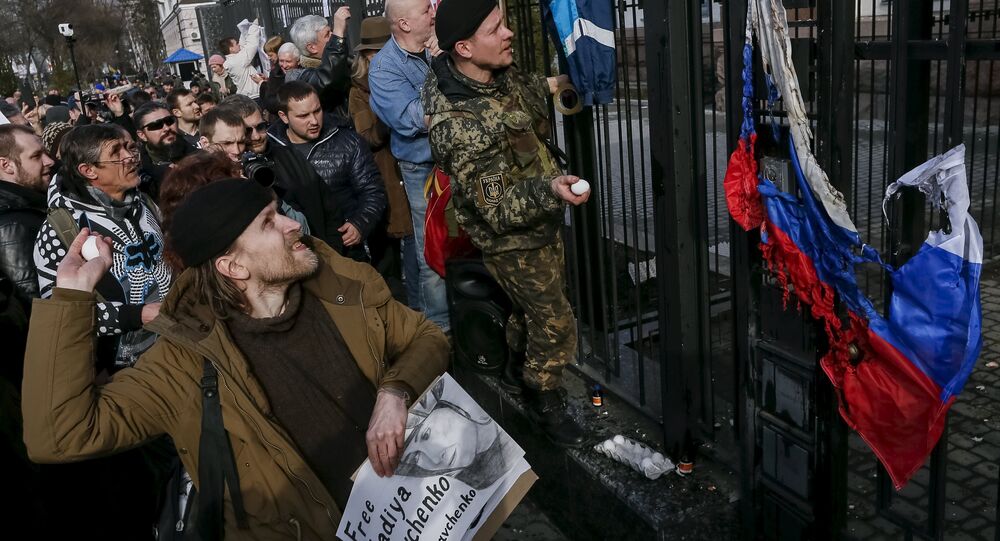 On Sunday, nationalist activists in Kiev attacked the Russian Embassy twice in the course of 24 hours, first smashing up diplomatic vehicles with sledgehammers and throwing smoke bombs in the dead of the night, and then pelting the Embassy with green dye, eggs and rocks in the daytime. Sputnik offers a timeline of events.

© Photo : YouTube/Vortex C14
Russian Embassy Protests 'Well-Organized' Attack on Property in Kiev (VIDEO)
In the aftermath of the February 2014 Maidan coup d'état, attacks on the Russian Embassy in Kiev have become a regular occurrence. The largest attack, taking place in June 2014, following the election of President Petro Poroshenko, was carried out by activists from the Right Sector, 'Maidan Self-Defense', Azov and other ultranationalist radicals armed with axes, baseball bats, rocks and Molotov cocktails.

During that event, extremists destroyed seven diplomatic cars, tore down the Russian flag, and threw bottles with green dye and eggs at the Embassy, causing 19 million rubles in damage. Then Ukrainian Foreign Minister Andrei Deschitsa (currently ambassador to Poland) supported the protesters, while Interior Minister Arsen Avakov called the riot an expression of the "civil stance of the people," and held off police intervention.

Early Sunday morning, in the dead of the night, a group of about a dozen people in dark clothes and balaclavas, armed with sledgehammers, gathered outside the Embassy, throwing smoke bombs and flares at the building and smashing up three Russian diplomatic vehicles. Embassy security had to fire warning shots into the air to deter the attackers.

Shortly after the attack, a video posted to YouTube explained that the attack was carried out in support of Nadezhda Savchenko, a former volunteer pilot fighting for the Aidar Battalion (a neo-fascist group accused of war crimes in eastern Ukraine) captured by Donbass militia in 2014 and charged with killing two Russian journalists, who is currently being tried.

​Regarded as a political prisoner by Ukrainian authorities and the country's media, Savchenko, who is formally listed as an MP in absentia from the ruling coalition fraction 'Fatherland', is on trial for murder in Russia, having illegally crossed the Ukrainian-Russian border in 2014 disguised as a refugee. The court session during which she is set to deliver her final statement is now scheduled for March 9.

Commenting on the nighttime Embassy attack, Russian news commentators took note of the fact that the attackers did not even attempt to hide their identities; the YouTube video of the attack was posted by the known extremist and former 'Kiev-2' volunteer battalion fighter Evgeniy Karas.

The nighttime attack was followed by daytime rallies and pickets, scheduled ahead of time to be held in Kiev, Kharkov and Odessa (i.e. Ukrainian cities with a Russian diplomatic presence through an embassy or consulates) on March 6, calling for Savchenko's immediate release.

During the day Sunday, about 100 people gathered in front of the Embassy in Kiev, waving flags and carrying signs reading '#FreeSavchenko'. Some of the protesters tossed eggs and green and red dye at the Embassy walls. Eventually, several men in military fatigues began climbing through the fence, throwing rocks, breaking a window and a security camera, painting obscenities on the Embassy gate, trampling and then burning a Russian flag, and stringing up an effigy of the Russian president with a noose over his neck.

© REUTERS / Gleb Garanich
A protester shouts as he climbs the fence of the Russian Embassy in Kiev during a rally demanding the liberation of Ukrainian army pilot Nadezhda Savchenko, March 6, 2016.

​Throughout the affair, Ukrainian riot police were shown standing idly by, refusing to detain the most zealous protesters, saying it was not in their competency, especially since 'no significant damage' had been done.

© AFP 2021 / SERGEI SUPINSKY
A protester throws a brick at a door of the Russian Embassy in Kiev after climbing over a fence during a rally to demand the release of hunger-striking Ukrainian pilot Nadiya Savchenko, March 6, 2016.

Sunday's vandalism of the Russian Embassy was met with a protest in the Russian capital Sunday evening. Protesters outside the Ukrainian Embassy in Moscow cried 'Shame', 'Savchenko is a murderer' and 'Fascism will not pass', and carried banners calling for Russian-Ukrainian friendship and against the 'Kiev junta' and its 'puppet masters' in Washington. A few eggs were thrown, none of them managing to hit the Embassy building, whose lights were out.

​Police in Kiev said that they had launched a probe into the attack which took place Sunday morning, interviewing witnesses and finding one of the hammers used to smash up Embassy cars. The attack has been qualified as 'hooliganism', a charge punishable by a monetary fine, or up to six months' imprisonment.

Commentators have made note of the fact that the Embassy attack featured similar tactics to an Azov battalion attack on the Ukrainian Security Service office in Kiev earlier this month. That attack took place following the security agency's detention of one of Azov's leaders – Stanislav Krasnov, the head of the battalion's Crimean wing.

​Commenting on the attack on the Russian Embassy for RIA Novosti on Monday, Sevastopol Governor Sergei Menyailo suggested that the attackers had chosen the wrong address.

"The people in Kiev got the wrong address, mixing up the street with the Russian Embassy for Bankova street [which houses the Ukrainian Presidential Administration]. It's not the Russian diplomats who are to blame for Ukraine's economic crisis, nor are they the ones who launched a war in Donbass, or the ones who started this quarrel with their closest neighbor," Menyailo said.