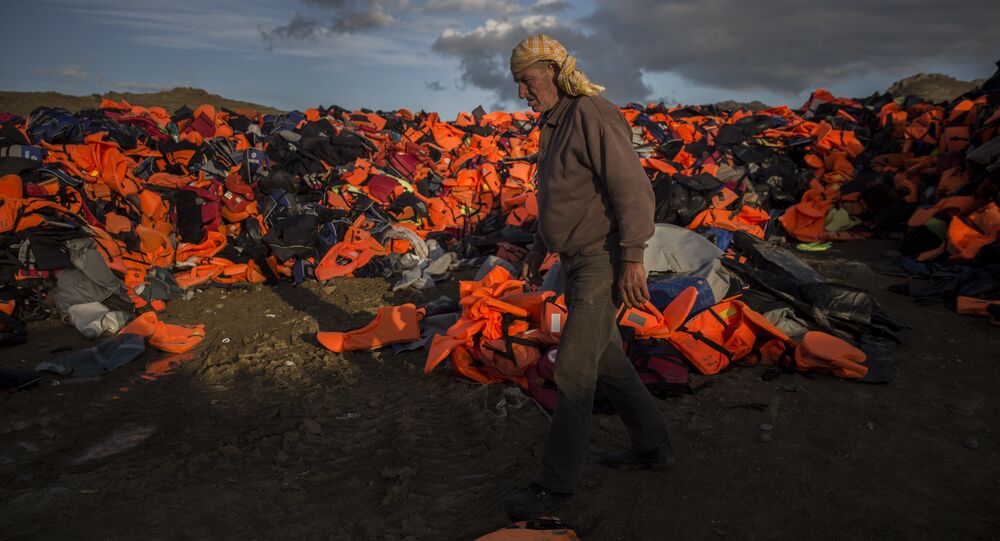 The EU is ready to overlook the problems of Erdogan's Turkey because of its desperate desire to stop the flow of migrants into Europe, the Financial Times reported.

© AFP 2020 / ADEM ALTAN
Dirty Deal: EU Ignores Turkey's Butchering of Kurds if Erdogan Mops Up Migrants
The EU is willing to make a deal with Turkey at any price to stem the flow of migrants into Europe, despite misgivings about President Recep Tayyip Erdogan's autocratic government, crackdown on the opposition and human rights abuses, the Financial Times reported on Sunday.

"Rarely has the EU needed Turkey so badly. And rarely has Turkey looked like such an unattractive partner," wrote Gideon Rachman.

"The raid on Zaman newspaper, the country’s largest daily, underlines the fact that Turkey is an increasingly autocratic and unpredictable state, driven by the personal whims of its president. The EU issued a statement of concern, following the raid. But it is unlikely to press the matter very hard – given the urgent need for Turkish co-operation on refugees."

The EU is also troubled by the thought that its requests to Turkey for cooperation on the migrant crisis may be difficult for the Turkish government to accept. Their demands involve Turkey stopping migrants from leaving Turkey and crossing the Aegean Sea to Greece, but also agreeing to take back migrants who are not from Syria.

"We’re asking Turkey to keep its border with Syria open to refugees, but to close its border to Greece and to accept non-Syrian migrants that we turn back from the EU. I’m not sure I would agree to that, if I were them," Rachman quoted a German official in Brussels as telling him.

© AFP 2020 / MOHAMMED AL-KHATIEB
Russian MoD Accuses Turkey of Ongoing Hostilities in Syria's Aleppo, Idlib
Another factor giving rise to anxiety in the EU's dealings with Turkey is tension between Turkey and Russia following the shooting down of Russia's Su-24 bomber over Syria in November last year by the Turkish air force.

"The Europeans fear that there could well be further military clashes between Russia and Turkey," Rachman writes.

"Given the fact that Turkey is a member of Nato and might then invoke the alliance’s collective defence treaty – the risks involved in further escalation are extremely high. So the Europeans will also be very wary of writing President Erdogan a blank cheque, over his handling of Syria and Russia."

EU-Turkey Summit Focusing on Migration Issues to Kick Off Monday