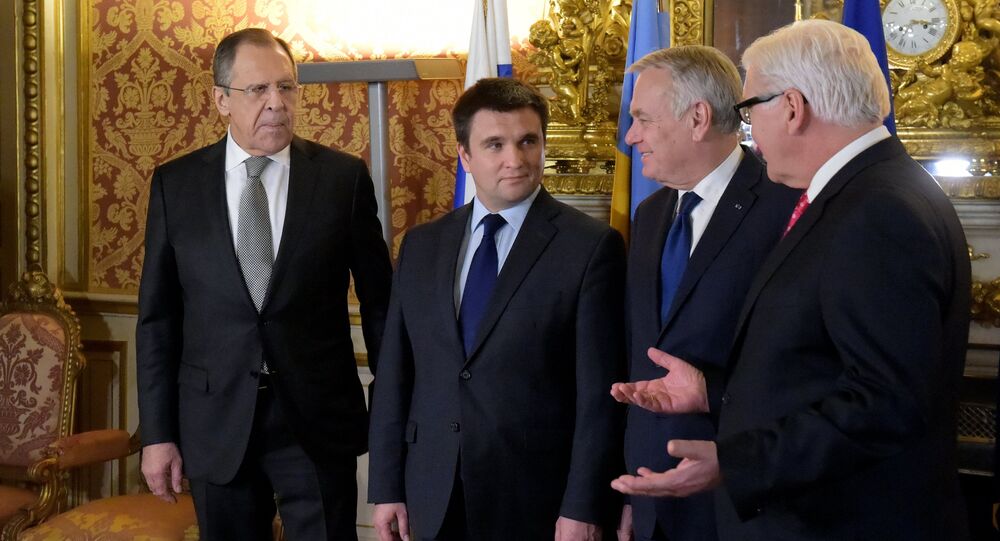 Earlier this week, Brussels poured cold water on post-Maidan Kiev's European ambitions, with European Commission President Juncker ruling out the possibility of Ukraine joining the EU or NATO for up to a quarter century. Russian political analyst Gevorg Mirzayan argues that the ramifications of Mr. Juncker's statement cannot be overestimated.

Late last week, speaking at a press conference ahead of an advisory referendum in the Netherlands on Ukraine's association agreement with the European Union, European Commission President Jean-Claude Juncker attempted to reassure anti-association Dutch voters by saying that "Ukraine will definitely not be able to become a member of the EU in the next 20-25 years, and not of NATO either."

Political commentators have suggested that Mr. Juncker's words are a sobering truth for the Euromaidan revolutionaries who overthrew the government of Viktor Yanukovych in February 2014. Their ideology, it's worth recalling, was based heavily on the idea that Ukraine must join the European Union, instead of integrating into the Eurasian Economic Union, then an idea for a customs union between Russia, Kazakhstan, and Belarus.

© REUTERS / Yves Herman
Sucker Punch: Ukraine Will End Up Waiting Forever for EU Membership
For this reason, Russian journalist and political analyst Gevorg Mirzayan suggests that Juncker's remarks are not just a damper on post-Maidan Kiev's political ambitions, but a threat to the country's governing ideology.

"March 3 was a sobering moment for the Ukrainian regime. Kiev's European and international partners said everything they think about the Ukrainian authorities' policy," Mirzayan noted, in an article for Russian business magazine Expert.

Furthermore, Brussels' "decision, taken March 2, to suspend the introduction of a visa-free regime for Ukrainians, served as a kind of appetizer; according to European officials, Kiev had failed to fulfill its obligations in the fight against corruption. And the Europeans served the main course," in the form of Mr. Juncker's remarks, "the next day."

"The very public refusal to bring Ukraine into the EU is understandable," Mirzayan noted. "First of all, Europe is burdened by a series of internal problems, and intends to abandon expansion in the medium term in principle. Secondly, the Europeans have an extremely negative attitude toward Ukraine's candidacy. It's worth recalling that in the Netherlands, the referendum is not even about Ukraine's membership in the union, but just its European association, and as of today its citizens seem intent on saying 'no'."

"Juncker's remarks about NATO are even more interesting, and disturbing for Kiev," the journalist suggested. "Unlike the EU, the alliance is moving forward with its expansion, and doesn't have any equivalent to the EU's 'Maastricht criteria' (a series of economic indicators necessary for countries to join the Eurozone)."

© AFP 2021 / SERGEI SUPINSKY
Europe Considering Options to 'Bargain Off Ukraine'
Therefore, theoretically, "joining [NATO] should be much easier for Ukraine, especially given Kiev's willingness to become an anti-Russian outpost, even [if this entails] serious economic losses for itself. Juncker's statement indicates that the alliance is not interested in a conflict with Russia, and that it does not want a new problematic member; Erdogan's unpredictability and regular attempts to put NATO on the brink of war with Moscow are enough of a problem for them."

Factually, Mirzayan suggests, "Europe did not say anything new; it was always clear that neither the EU nor NATO awaits contemporary Ukraine."

"However, the very fact of this official statement puts Ukrainian President Petro Poroshenko in a very awkward position. The president had used the prospects of membership in European institutions as one of the tools helping him and the West to push through reforms which have been very painful for the population. Ukrainians were told that the sharp increase in utility rates, the break in economic relations with Russia, the reduction in social spending – all of this was being done for the sake of the 'bright European future'."

"And when this 'bright European future' was revealed as a 'dark Ukrainian present', Poroshenko lost his leverage, gaining only questions from the public. And it cannot be excluded that the public will be joined by Poroshenko's political opponents, who will accuse the president of obstructing Ukraine's integration prospects."

© Sputnik / Evgeny Kotenko
'I Can Feel the Smell of Burning Tires': Ukraine's Ex-President Predicts New Revolution in the Country
"Another 'betrayal' of Kiev's European ambitions came from the United Nations. For starters, the UN Human Rights Monitoring Mission recommended that Kiev recognize identification documents issued to residents of Donbass and Crimea. The decision, which has an obvious humanitarian character, portends serious political consequences, especially in the case of the Donbass. The UN's recommendations factually refute Kiev's statements that the Donetsk and Lugansk People's Republics are comprised of terrorists, and recognizes the existence of a civil conflict in Ukraine. Moreover, the report strongly condemned the [so-called] blockade of Crimea, and spoke of the authorities' reluctance to investigate the burning of people in the Odessa House of Trade Unions."

"But why, suddenly, has the 'collective West' decided, at least through one eye, to show an objective picture of the situation in Ukraine?" Mirzayan asks. "Why have Ukraine's European partners embarked on a real and symbolic distancing from Kiev authorities?"

"It seems it is a question of preparing European public opinion for a change in EU policy toward Kiev. Europe will gradually accept the failure of its Ukrainian experiment, and engage in a substantive and public dialogue with Moscow on the restoration of relations."

"Theoretically," the analyst recalled, "Kiev does of course have a chance to derail the process of the Europeans' sobering up, but for this to occur it would need to somehow discredit Moscow. But how? The Kremlin is fulfilling its obligations under the Minsk agreement, takes a very measured position in relation to the dysfunctional behavior of Ukrainian authorities, and responds only in the framework of the principle of reciprocity (i.e. you block off our trucks, we block off yours)."

© REUTERS / Laszlo Balogh/Files
EU Extends Sanctions on Ukrainians for Year Over State Budget Mismanagement
"As for Kiev's desire to talk about 'repression in Crimea', this can lead to the opposite of what authorities are hoping for."

"Mr. Klimkin's proposal is feasible," Mirzayan recalled, "but there is no need to call 'the occupier' to agree to any additional resolutions. Moscow has repeatedly said that Crimea, as well as any other region of Russia, is open to international human rights observers. They can come and talk to locals. The only problem is that the results of these conversations will prove extremely unpromising for Kiev."

"After their visits, some European politicians may start talking about the fact the between the two possible solutions to the Crimean issue (the international legitimization of Russian sovereignty over Crimea, or the return of the peninsula to Kiev, with the simultaneous deportation of the more than 2 million of its inhabitants who do not want to return to Ukraine), the first option is preferable. And this would become not just a step, but a jump in the direction of the normalization of Russian-Western relations."

"Therefore, Mr. Klimkin would be better off simply remaining silent, instead of helping to push along a process which would have adverse consequences for him" (and for the whole post-Maidan government as a whole), the journalist concludes.