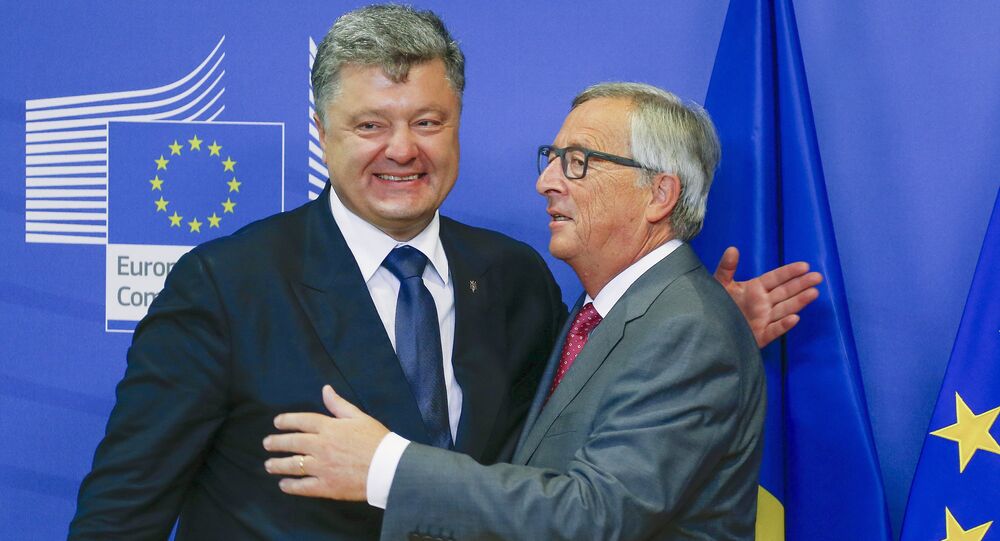 Earlier this week, European Commission President Jean-Claude Juncker ruled out the possibility that Ukraine would be granted membership in the EU or NATO in the next 20-25 years. Asked for comment by Radio Sputnik, political analyst Pavel Tarusin suggested that put another way, Juncker's words really mean that Ukraine will never receive membership.

At a press conference in The Hague on Thursday, Juncker poured cold water on the pro-EU Ukrainian elite's European aspirations, saying that "Ukraine will definitely not be able to become a member of the EU in the next 20-25 years, and not of NATO either."

Asked to comment on the EU politician's statement, Pavel Tarusin, a lecturer at Moscow State University's department of public administration, explained that Juncker's words are connected to the Dutch referendum on the EU-Ukraine association agreement.

© AFP 2021 / YURIY DYACHYSHYN
Juncker Shatters Kiev's Dreams of EU, NATO Membership Over Next 25 Years
"Judging by the latest opinion polling data in the Netherlands, it is doubtful that a majority of the population is ready to vote in favor of association with Ukraine. In this connection, Juncker's statement that EU membership does not await Ukraine is connected in part to the fact that he is hoping to convince the Dutch on the need to vote 'yes' to association" in next month's referendum.

At the same time, Tarusin emphasized, the existing format between Ukraine and the EU "is very beneficial to the Europeans," because Kiev has already effectively moved toward being externally managed; "its market transformed into an outlet for European goods."

"Therefore, [Brussels finds it] desirable that the Netherlands vote 'yes' on Euro-association, and that this format is secured. However, the EU does not want to see Ukraine in the ranks of its members. Turkey, for example, has been waiting for an invitation for 50 years, although it signed an association agreement with the EU back in the 1960s."

Now, Tarusin notes, "the same thing is happening with regard to Ukraine: there is a desire by Brussels to establish a formal institutionalized relationship with Kiev as an associate of the EU, and to take advantage of all the benefits this has to offer Europe, but not to shift to the question of Ukraine [actually] joining the supranational union."

The sobering truth for the Maidan revolutionaries, the analyst suggests, is that "nobody is waiting for Ukraine in the EU, and they never did. All told, these 20-25 years, translated from diplomatic language, really means 'never'. It's too distant a prospect."

© AFP 2021 / SERGEI SUPINSKY
Europe Considering Options to 'Bargain Off Ukraine'
In any case, "Ukraine is too big a country for the EU to be able to 'digest'; the country has over 40 million people. The kinds of grants that would have to be allocated to somehow raise the standard of living is a matter not of tens of billions of euros, but of hundreds of billions."

"Moreover," strategically speaking, "Germany and France would not like to see Ukraine's accession to the EU, because it would strengthen the position of opportunists from the Baltic States and Poland who are doing everything they can to hamper Berlin and Paris's attempts to build relations with Moscow."

Ultimately, the analyst suggests, "these relations are more important for the European Union than ties with Kiev."

For Ukrainians, Tarusin notes, Juncker's statement should really serve as a wake-up call.

"This will be a kind of moment of truth for Ukrainian society – for people to finally realize who their real friends are, and the same as regards their enemies. Maybe Ukrainians will finally understand that their age-old integration with Russia and the Eurasian space is more advantageous – more natural than the connections with the European Union, which has definitively demonstrated that it needs Ukraine only as an object through which to implement its own goals."