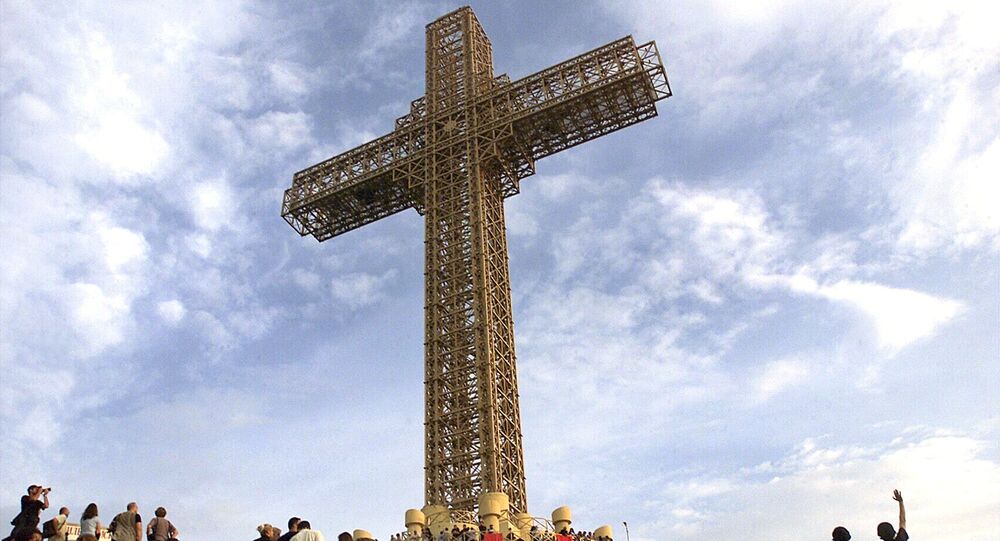 Macedonia's Albanians put up monuments in the shape of Albania's coat of arms in Macedonia's capital, while demolishing a construction site for a Christian monument in an increasingly violent conflict.

While both sides deny their monuments are meant to be divisive, Albanians and Macedonians in Macedonia's capital Skopje are pursuing an increasingly violent war of monuments.

Ethnic Albanians attacked a Macedonian man who funded a new monument in Skopje's Cair district, a Christian cross, and later bulldozed the construction site. Demonstrators also set up tents on the site and put up Albanian flags.

In February, the DUI party installed a monument in Cair commemorating the beginning of the 2001 conflict between Albanians from the Kosovo Liberation Army and the Macedonian government. On that day, eight Macedonian soldiers and policemen were tortured and burned in a fire after being ambushed and kidnapped by Albanian militants.

Local government chairman Izet Medziti claimed that Skopje must resemble Brussels, not Beirut, as a city of ethnic harmony, where minarets are put in mosques and crosses are kept in churches.

Wtf!!!!!!! The major of Cair municipality in Skopje put this albanian monument in skopje for uck fighters who killed our soldiers!!!!How did we alowed this to happen in our own country!!!???They opened it with ceremony with albanian dancing and songs. Make protest my brothers and sisters. Brake that double dickhead eagle!!! #fucken #eagle #burnit #go #protest #macedonia #makedonija #patrioticmacedonia Follow: @makedonecot @all_about_macedonia @kutleshanevergina @mighty_macedonia @esztigar_official @__macedonia

Macedonian authorities previously put up two other monumental crosses, including the Millenium Cross, a local landmark, which angered ethnic Albanian politicians in the country.

Macedonia faces elections in April, to which local media have attributed the conflict. The country's United States embassy also takes an active position in the country's tense ethnic and political landscape.

Refugee Crisis: How Do We Solve a Problem Like Macedonia?