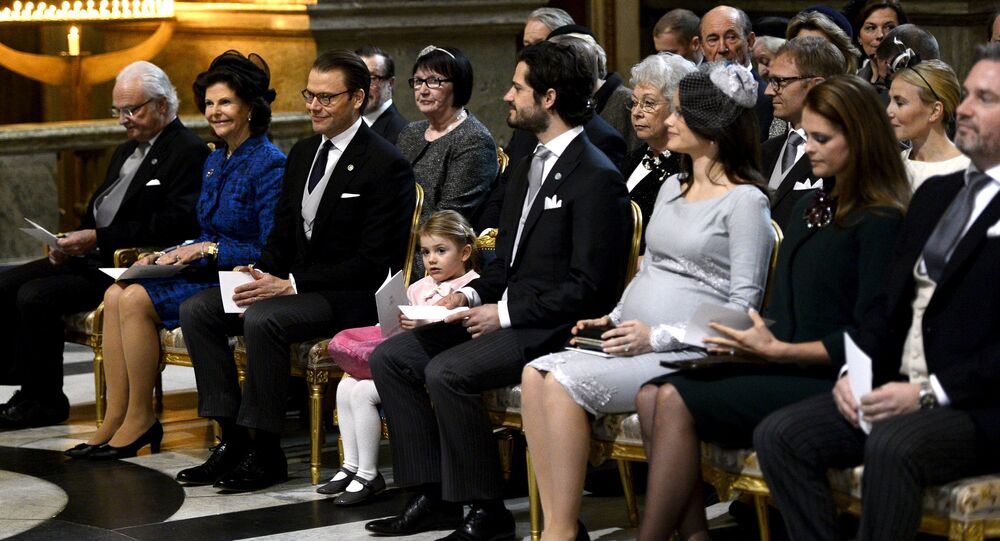 Sweden's newborn royal baby boy, Oscar Carl Olof, the Duke of Skåne and the third in line to the throne behind his mother and sister, has already sparked heated monarchy debates in the country, with many complaining that in the 21st century all the children born in the country should have equal opportunities for the country’s top post.

© REUTERS / Giorgos Moutafis
Europe Threatens Travel Restrictions Unless Turkey Halts Flow of Refugees
Oscar Carl Olof was born into the family of Princess Victoria of Sweden and her husband Prince Daniel at the Karolinska University Hospital in the Swedish capital of Stockholm on Tuesday evening.

His grandfather King Carl XVI Gustaf has announced that the boy will be known as the Duke of Skåne, Sweden's southernmost region, and will be third in line to the throne behind his mother and his four-year-old sister, Princess Estelle.

The news has caused heated debates in the country on whether in the 21st century the country’s top post should still remain hereditary or if it should be open to all the children born in Sweden.

“It is absolutely absurd that we appoint our future head of state in this way,” the Swedish media quotes Magnus Simonssen, General Secretary of the country’s Republican Association, which promotes the abolition of the country’s Monarchy and the establishment of a republican form of government, as saying.

© REUTERS / Laszlo Balogh
'Schengen is Dead': EU Failed to Protect Its Key Ideals Amid Refugee Crisis
Simonssen calls for all the children being born in the country to have the opportunity to reach the country’s top post.

Simonssen lamented that in the neighboring Finland, for example, all the people have equal opportunities to become the country’s next president, while in Sweden the highest post is still inherited.

His view is echoed by Yasmine Larsson, from the same association, who is also vocally critical of the Monarchy.

“Every day hundreds of babies are born in Sweden. Each baby is unique and deserves the best care our society is able to provide,” the Swedish media quotes her as saying.

However, she added, over and over again the Swedish society is being forced to think that the Royal babies are better and more important than

© Flickr / Sigfrid Lundberg
Feeling the Burden: Swedish Taxes May Rise Due to Migrants Influx
all the rest in the country.

The 2015 Swedish Monarchy opinion polls, conducted by YouGov, however suggest that 40% of the country’s population still favor the institution, while 17% call for its abolition and 30% regard it an outdated tradition.

Some experts though suggest a decline in interest towards the country’s Royal family, which has traditionally gained much public attention from weddings and royal births.

Much of the Royal family members, the experts state, are already married and already have children.

The Republican Association, in turn, is convinced that the Royal Family “brand” is not of particular interest to tourists, which are more attracted by the country’s scenery: mountains, forests and the sea.