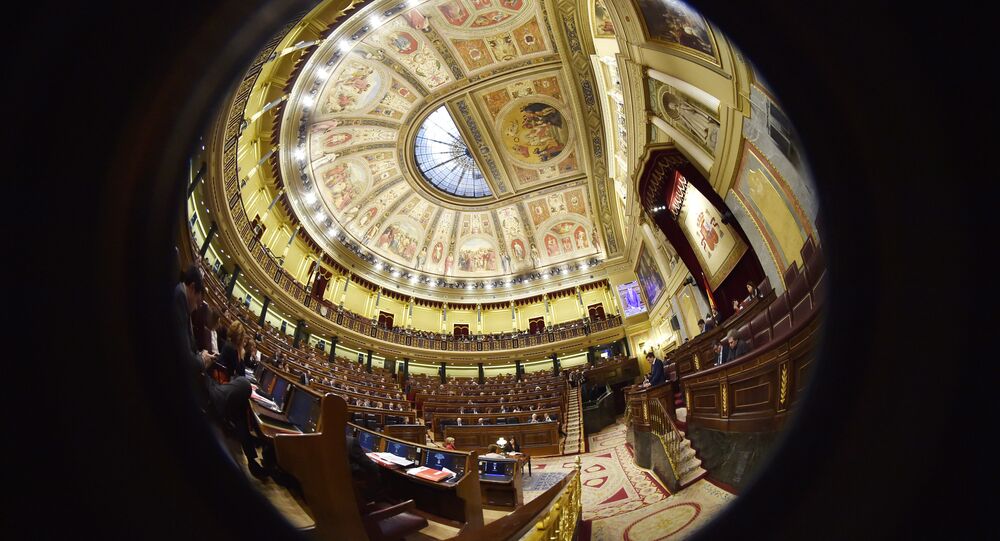 Spain seems bound for a constitutional crisis after the socialist leader Pedro Sanchez failed to convince the leftist, anti-establishment Podemos party to support his minority government.

Podemos leader and pony-tailed academician Pablo Iglesias has already announced his movement will not accept Sanchez's demand. Podemos is now expected to vote against Sanchez if he seeks a parliamentary vote of confidence on his prime-ministerial bid.

© AFP 2020 / Pierre-Philippe Marcou
Spanish Socialist Supremo Sanchez in Last Ditch Battle to Form Gov't
The only party that could join the Socialist Party (PSOE) in backing a Sanchez cabinet is the small center-right group Ciudadanos. This leaves Sanchez with only 90 votes from PSOE plus 40 from Ciudadanos — a total of 130 whereas the majority in Spain's parliament is of 176 votes.

The impasse is opening a deep rift between the country's left-wing parties, which has only grown deeper after Podemos' scathing criticism of Sanchez during a high-octane parliamentary debate last Wednesday. Dialogue now seems a very remote possibility.

Sanchez will have to once again seek a majority vote on his bid to form a cabinet. He would only need a simple majority — that is: more people voting for him than against him — to clinch it. Still, even that prospective seems very unlikely.

If you thought British politics was complicated follow what is happening in Spain. Bloody soap opera.

​Were Sanchez to fail, negotiations will resume for up to two months. After that, unless the parties reach a deal, new elections will be called.

Podemos's line is that the new government should result from an alliance among all the leftist forces in parliament. Iglesias has spoken of a "government of progress" that would gather under the same umbrella Podemos, the PSOE, United Left and Compromís. The anti-establishment party's main concern with Sanchez's current proposal is his deal with Ciudadanos.

Sanchez believes that a left-wing coalition would not be able to deliver a government really alternative to the current interim cabinet, led by conservative Mariano Rajoy of the Popular Party. Still, Sanchez' bid to cut deals beyond of the left's boundaries has not panned out so far.

Looks like Spain is heading for national elections again (in June). I don't think this helps Podemos https://t.co/oFvn4Bnacf

​Sanchez's failure would be a historic first — no candidate appointed by the king to form a government has been unsuccessful since the death of General Franco in 1975.

The current situation is the result of a sea change in Spain's political landscape, after last December's election witnessed the country's longtime two-party system.

For over 30 years, Spanish politics has been dominated by PSOE and the Popular Party. But, after the introduction of harsh austerity measures following the bailout of the country's banks in the wake of the global financial crash of 2008-9, the two main parties have decreased in popularity.

Socialist leader pins hopes on anti-austerity Podemos to support them so they can form next government. Chances are slim. #supermiercoles

​Now that neither of them can muster a majority, new anti-establishment parties like Podemos and Ciudadanos, besides regional independence movements, have started playing a huge role in shaping the country's future, something unthinkable just five years ago.