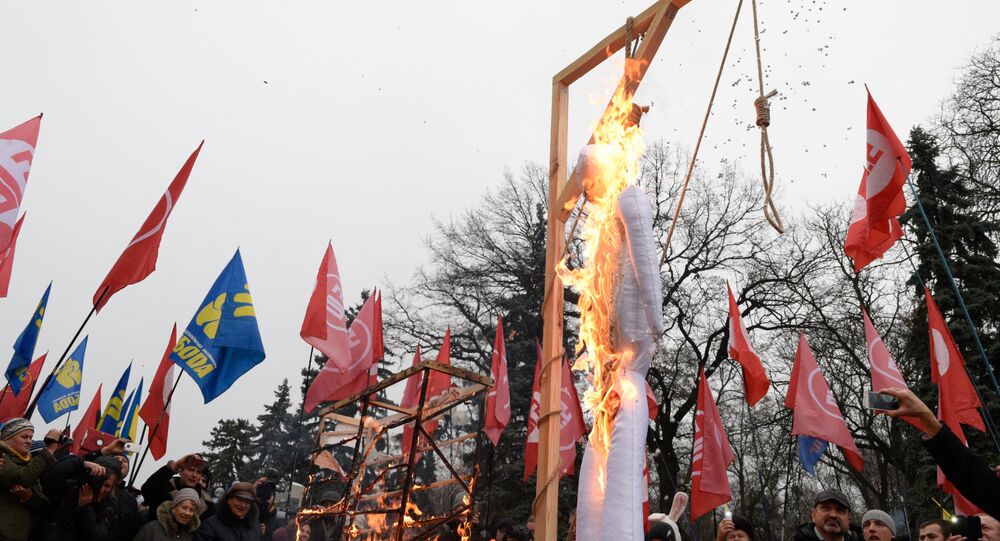 Two opposing forces are now ruling Ukraine, but none of them is going to tackle the country’s problems, German media reported.

© REUTERS / Valentyn Ogirenko
'Spinning Into Chaos': Ukrainian Government Nearing Collapse
The political turmoil in Ukraine is deepening day by day, and it is clear that the coup-installed government has been plunging the country in chaos since its very first days in power, the German newspaper Die Zeit reported.

Two years after the Maidan revolution, the country is again in a deep crisis. President Petro Poroshenko has urged Prime Minister Arseniy Yatsenyuk to resign. Nevertheless, the government managed to survive a no confidence vote. For any other country, this scenario would be disastrous, but not for Ukraine, the article read.

The situation is that within one political system there is a standoff between two opposing forces which have to jointly rule the country. According to the author, Ukrainian people are fed up with political scandals and see their country headed toward a dead-end, like after the Orange Revolution in 2004.

© Sputnik / Stringer
Ignorance is Bliss: Kiev Mayor Has No Idea About Situation in Ukraine
At the same time, Poroshenko pretends that he is not risking a loss of confidence. It is worth mentioning that before Poroshenko became a staunch advocate of reforms and democracy he served as economy minister under the old political system. Just as at that time, Poroshenko is still an oligarch and will not sell his business empire, the article read.

Despite the rift between the government and the president, the cabinet has no strong cards against Poroshenko, because it has failed all reforms and the struggle with corruption.

Those who made attempts to implement reforms have resigned, and the entire government now should follow in their steps, according to the author.

"But the government managed to stay in power, having stripped the country of the last chance to avert catastrophe," the article concluded.