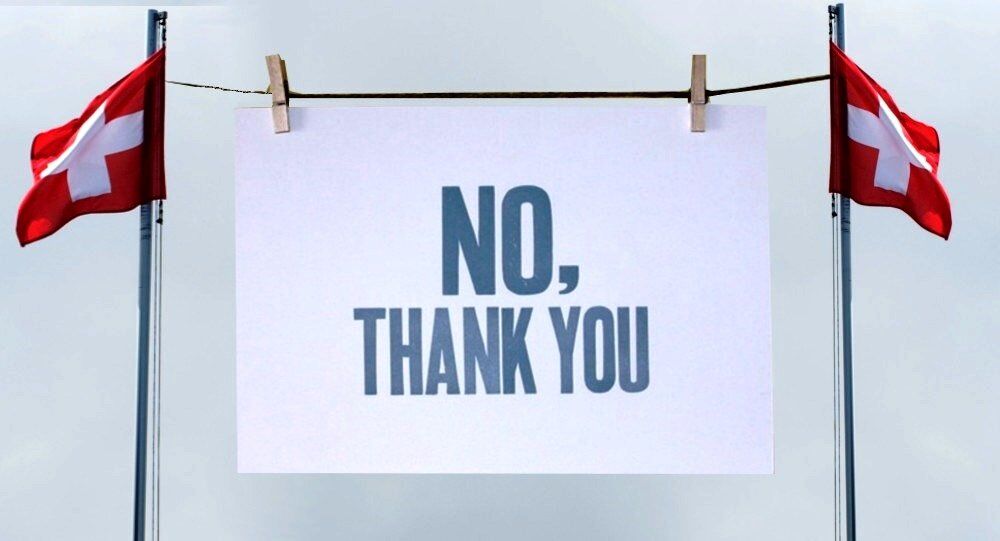 The Swiss Parliament has voted by a majority of 126 to 46 to withdraw its long-standing application for membership of the European Union, ending 24 years of debate about joining the union giving backing to campaigners in Britain seeking to leave the EU.

© REUTERS / Arnd Wiegmann
Switzerland to Hold Referendum on Foreigners' Expulsion
Switzerland applied to join the European Union in May 1992, but despite several referendums in Switzerland declining to take the application forward, the Swiss government has never formally withdrawn the application — until now.

The National Council — the lower house of the Swiss parliament voted through a proposal that Switzerland should no longer be seen as a country preparing to join the EU. The withdrawal motion will now go to the upper house, Council of States.

After rejecting EU membership by 76% in 2001, the Swiss formally pull their application, and invite us to join them. https://t.co/QorAhgqByi

Lukas Reimann of the Swiss People's Party, who proposed the motion — and referring to the current European refugee crisis — said:

"It is hardly surprising that the EU looks like an ever less attractive club to join. What, after all, is the appeal of joining a club into which the entire world can apparently move?

"Switzerland had been brutally treated as a nation aspiring to join the EU, in all its negotiations. It had to accept idiotic bureaucracy in the previous era of the Europhiles. Now Switzerland is a more independent nation and in a better position to negotiate with the EU."

The decision will be a boost for those campaigning for Britain to leave the EU in the forthcoming In-Out referendum on the UK's membership of the union. Euroskeptics argue that Britain would be better out of the EU, which many see as a sprawling bureaucracy which has taken powers away from Westminster.

"This is a clear and historical message from the Swiss parliament to British voters. We wish you the best of luck for Brexit. These days, Switzerland is called Britzerland because Swiss people support the Brexit. A big advantage of leaving the EU, is free trade worldwide, not only between the member states, making it easier and cheaper for British companies to export their goods to the rest of the world, Reimann said.

Norway & Switzerland, the 2 most prosperous nations on earth, somehow manage to struggle by without being in the EU. pic.twitter.com/ZaH9bsw66y

"The boost to income outweighs the billions of pounds in membership fees that Britain would save if it left the EU. The UK can have even more of its important negotiation power internationally, by leaving the trading bloc: It would be free to establish trade agreements with non-EU countries worldwide.

"The vast majority of small and medium-sized firms do not trade with the EU but are restricted by a huge regulatory burden imposed from abroad. Leaving the EU makes the United Kingdom more open to the world without being bound or enslaved by EU laws on areas such as agriculture, justice and home affairs. The era of the EU application is over for Switzerland. And the era of the EU membership could be over soon for Britain. This is Britain's chance of the century for a better future and for prosperity!" he said.

Switzerland in Talks With EU on Immigration Limits