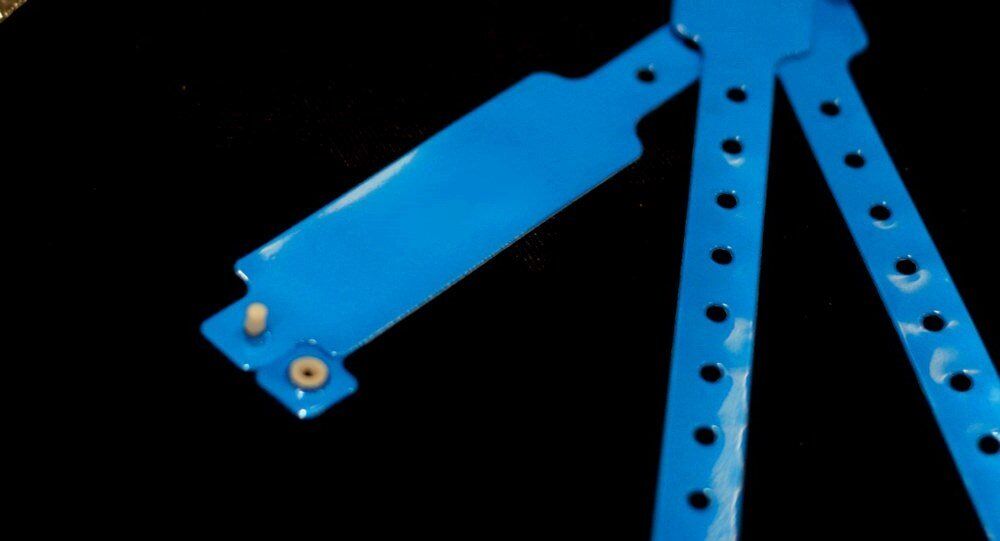 A row over wristbands for asylum seekers in Wales has been called "ludicrous" by chair of the Welsh Affairs Committee David Davies MP, who told Sputnik that "the important issue here is whether we vote to leave the EU or not."

Lynx House in Cardiff has been at the center of a controversy over asylum seekers being forced to wear wristbands to receive food. According to the Welsh Refugee Council (WRC), "the practice of forcing asylum seekers to wear brightly colored wristbands… is abhorrent and a regressive step away from Wales' long history as a nation of sanctuary".

Following the controversy, Conservative MP for Monmouth, David Davies paid a visit to Lynx House amid further claims of overcrowding and poor conditions for asylum seekers.

"The row over the wristbands is the most ludicrous row I have ever heard," he told Sputnik.

"If they've escaped war, fled an awful situation and turn up, get a nice room in a safe country where you're offered three meals a day — would you mind wearing a wrist band to protect taxpayers' money?" Davies asks.

"If that's the worst thing that's ever happened to them then I think the economic migrants are pretty ungrateful," he said.

However, asylum seekers told WRC that "the use of the wristband to get a meal is humiliating and we are not always believed even when we wear them."

To wear a Tag as an asylum seeker,oh Cardiff this is so low! #lynxhouse

Christ. There has to be a better solution than labelling human beings. What's next, the Star of David? #lynxhouse https://t.co/OZJpWlFKif

"I'm going to spell it out — I don't care, it's my view but I think everyone is fed up, I'm a taxpayer too. We're getting a load of angry young men expecting us to change the rules to suit them and aren't willing to enter into the spirit and rules and regulations — instead they complain about wearing a wristband."

According to the WRC: "the stigmatizing practice is the latest in a long line of concerning procedures which neglect the interests and well-being of those seeking protection.

"We are very pleased to know [property management company] Clearsprings Ready Homes has now removed the use of wristbands as an identity to get a meal at Lynx House."

David Davies told Sputnik the bands have been replaced by ID cards.

"I've visited refugee camps in Calais, Hungary and seen the detention centers in Greece. The reality is the threat that the vast majority arriving in Europe and the UK are young men, not families. It begs the question, where are their wives? I don't accept that many of them are genuinely refugees; they're economic migrants — if they were truly fleeing war you would expect to bring their families with them," Davies told Sputnik.

"The [asylum] system is broken and we have to give asylum to those who don't deserve it. I support the British government's policy bringing in the neediest but the high numbers of people coming here are arriving illegally, abusing the system and the public has lost all sympathy."

But with sympathetic rhetoric, the International Development Committee recently called for the British government to do more to help thousands of unaccompanied child refugees in Europe — in addition to the Syrian resettlement program.

Ministers have faced calls from the committee of MPs and charity Save the Children for 3,000 refugee children who are alone in Europe to be resettled in the UK, amid concerns that the British government is not doing enough to ease the refugee crisis.

According to David Davies, the wider issue surrounding the row over the wristbands in Wales is Britain's membership of the EU.

"If we remain in Europe we will be dealing with millions of migrants each year," Davies told Sputnik.

"If we opt out, there will still be hundreds of thousands but we won't have to offer the same rights and benefits, so the numbers should come down drastically. But they'll go through the roof if we stay in," David Davies warned, placing the blame squarely on German Chancellor Angela Merkel's shoulders.

"This is because of Angela Merkel. It's a ludicrous and an extraordinary suggestion that anyone who can make it to Germany will be given a house and accommodation and a right to stay… She has opened up an avalanche. People from across North Africa, the Middle East and Pakistan are making their way to Europe because of what she said. The countries can't cope," Davies said.

"It's an inept policy, as opposed to the British government's incentive for people to remain in refugee camps, not risk their lives… and we will accept 20,000 of the most vulnerable. We've put a billion into providing safe refugee camps but because of Angela Merkel's policy they are risking their lives and end up being stuck on the Macedonian border.

"What we should be doing it getting out of this shambles," said David Davies, referring to the European Union and suggesting Angela Merkel should resign.

German Chancellor Angela Merkel still stands by her decision to reject any limit on the number of asylum seekers allowed into Germany, despite rifts within her own government.

"There are many conflicting interests in Europe… but it is my damn duty to do everything I can so that Europe finds a collective way," she recently told state broadcaster ARD.

Meanwhile 7,000 refugees remain stuck in Greece following border closures across the Balkans, where 45,000 migrants and asylum seekers have arrived so far this year.

One thousands asylum seekers are currently accommodated in Wales.