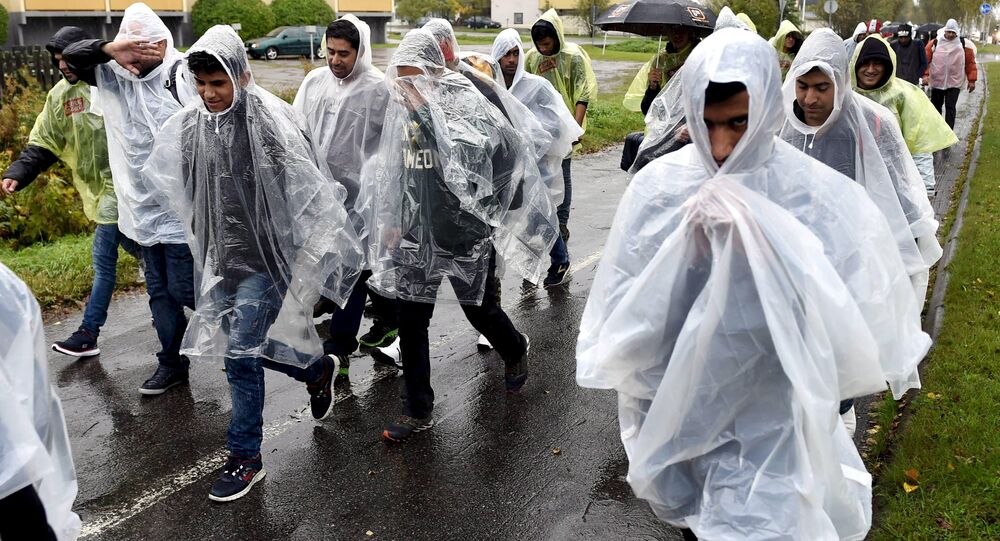 From Aleppo to Helsinki, Syrian Wants to Become Finn After Daesh Takeover

A teenager shared his story of escaping from the bloody civil war in Syria, crossing the Aegean Sea and trying to start his life anew in Europe.

MOSCOW (Sputnik) — It took Ali 15 long and dangerous days to travel from the Syrian city of Aleppo to Northern Europe’s Finland in search of peace and refuge after his city was captured by Daesh, he told Sputnik in an interview.

“I arrived in Finland after a long journey by sea and by land. I left Aleppo in 2014 when it was invaded by Islamic State [Daesh],” Ali, who is now living in Finland, explained.

For Ali, Finland is a chance to rebuild his life, to start anew as the terrorists have deprived him of his former home and dreams. Like many of the almost 32,000 asylum seekers who arrived in Finland last year, he wants to learn the local language.

© Sputnik / Michael Alaeddin
Destruction in the Old Town of Aleppo.

His only wish now is to stay at the reception center in Helsinki, where he now has a voluntary job, friends and takes lessons of Finnish.

© Sputnik / Iliya Pitalev
Battle for Aleppo: Life Under Flying Bullets
10
Ali was born in Aleppo, but Daesh's seizure of the city drove him and his family out of their home. The journey from the war-torn Syrian city to Finland took 15 days, and cost 2,000 euro, paid to smugglers.

“My trip was 15 days long and it was full of challenges. We first went by sea, where hundreds of people suffered, it was the Aegean Sea,” Ali says.

Having crossed the sea, the refugees spent three days on the streets of a Greek island before being moved to Athens, from where the route continued through Macedonian forests to Serbia.

“But the real trouble was Hungary, where the border police used tear gas against us and shut the road. But despite all those troubles, we had high hopes and expectations of being safe, somewhere warm,” Ali recalled.

In Finland, Ali was warmly welcomed. Since being sent to a facility in Helsinki, he has had several volunteer jobs – from delivering flowers to working in a hospice.

“Finland welcomed us with open arms and hearts… I am a determined person, and after arriving in Finland I was searching for a school and a job. I have a work permit, but since I could not find job, I have been doing volunteer work,” Ali said.

The Finnish authorities provide Ali with food and accommodation, which allows him to do volunteer work. The only problem Ali mentioned was the fact that the Finnish authorities have decided to move him to a different camp, something he is resisting, as he has a job, friends and is taking lessons of Finnish in the area where he currently lives.

© Sputnik / Michael Alaeddin
A street in the Old Town of Aleppo.

Yet, six months after he applied for asylum in Finland, there is still no response. His dream now is to complete his education.

“I am an agricultural engineer, but because of the war, I could not finish it. I lost my home, my place in university and the right to graduate,” Ali lamented, but stressed that he intended to complete his studies in Finland now.

In 2015, Finland welcomed over 32,000 asylum seekers, compared to 3,600 in 2014. Most of them – 20,485 — came from Iraq. According to Interior Ministry estimates, about two-thirds of them will not be granted permission to stay in the country as asylum seekers.

© AP Photo / Hussein Malla
Paradise Lost: Once Bustling, Lively Syria Before 2011 Civil War
19
In February, Finland started to deport asylum seekers who had failed to meet the criteria necessary to be permitted to stay in the country or who had decided to leave the country voluntarily.

According to the UN refugee agency, 6.6 million Syrians are currently displaced inside the conflict-torn Arab republic, while about 4.6 million people have fled the country, triggering a massive refugee crisis in Europe.