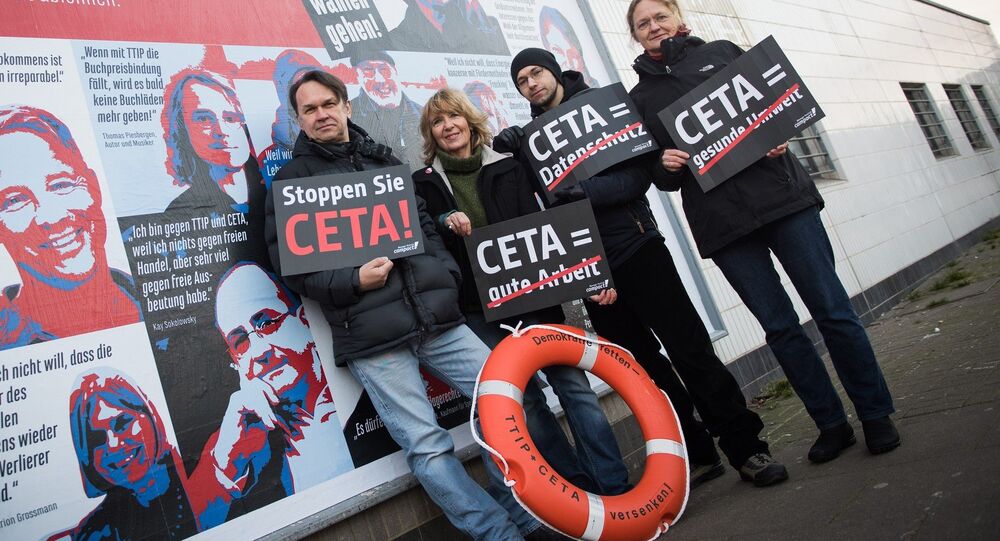 Campaign groups have slammed a new trade deal between the European Union and Canada that contains a controversial dispute resolution process similar to that objected to under the proposed Transatlantic Trade and Investment Partnership (TTIP).

The EU-Canada Comprehensive Economic and Trade Agreement (CETA) — which is in the final stages of negotiation — contains a similar process of resolving disputes between private companies and governments to the yet-to-be-ratified TTIP: the Investor-State Dispute Settlement (ISDS) which critics say will override national judiciaries and give big business the ability to sue governments over lost profits.

Critics say the ISDS mechanism would enable corporations to sue governments in secretive, supra-judicial courts for bringing about legislation that would harm their profits. Thus, if a US multinational company lost profits because their product or service was banned by law for health or other reasons. Critics believe large multinational companies — which have been lobbying hard for the TTIP — will force through a trade agreement that would reduce the ability of democratically-elected politicians to regulate the market.

Under the CETA agreement, the ISDS would take the form of an Investment Court System (ICS), based on proposals by the EU to assuage the fears of critics of the ISDS. However, critics — including Pia Eberhardt, trade policy researcher and campaigner with Brussels-based lobby watchdog, Corporate Europe Observatory — say the two are hardly different.

"The investor-state dispute settlement (ISDS) clause in the deal is set to be based on EU proposals for an Investment Court System (ICS) that were announced last autumn following unprecedented public outcry. However, ICS is no new departure. Indeed, it is the same special rights for foreign investors come back from the dead," she wrote in an opinion column for EU Observer.

At the heart of the CETA deal is the agreement that "an investor of a Party may submit to the Tribunal, constituted under this Section, a claim that the other Party has breached an obligation […] with respect to the expansion, conduct, operation, management, maintenance, use, end moment and sale or disposal of its covered investment; or […] where the investor claims to have suffered loss or damage as a result of the alleged breach."

"The commission's investment protection proposal still offers corporations the right to sue governments over measures to protect the environment, health and workers. If TTIP and CETA go ahead as planned, tens of thousands of Canada and US-based companies operating in the EU would be newly empowered to sue."

"With the changes we have agreed we bring CETA fully in line with our new approach on investment protection in trade agreements. In particular, we demonstrate our determination to protect governments' right to regulate, and to ensure that investment disputes will be adjudicated in full accordance with the rule of law."

TTIP 'Could Prevent Tax Justice' Amid Concerns Over Corporate Courts