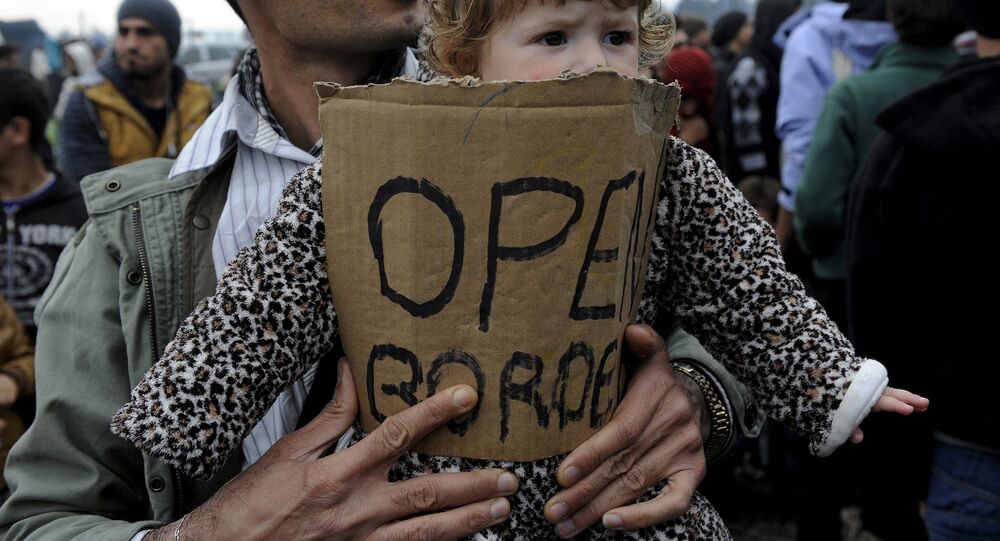 With tens of thousands of refugees and migrants stranded in Greece following Macedonia's decision to impose restrictions on its southern border, officials in Skopje have warned that the so-called Balkan route could close altogether once Austria reaches its stated refugee limit for the year.

Macedonian President Gjorge Ivanov warned that the reduced number of people traveling through the Balkans could come to a complete stop once Austria's annual refugee limit of 37,500 is reached.

Macedonia last week decided to place restrictions on the number of people entering the country from Greece, following similar decisions from Austria and other Balkan states, sparking fears up to 70,000 people could soon be left stranded in Greece.

© REUTERS / Yannis Behrakis
Stranded refugees walk through a national motorway towards the Greek-Macedonian border near the Greek town of Polykastro after ignoring warnings from Greek authorities that the border is shut, as hundreds of migrants set off on the country's main north-south motorway to Idomeni border crossing February 25, 2016.

Despite riots by refugees and international pleas for Macedonia to loosen its border restrictions to alleviate the pressure on Greece, Ivanov defended his government's actions.

"In times of crisis, every country must find its own solutions," he told German news site Spiegel Online.

Pressed on when the Balkan route could be closed, Ivanov said: "When Austria reaches its limit, it will happen," noting that it could occur "perhaps right at this moment."

'We Need a Political Solution Now'

Austria ruffled feathers in Brussels when it announced annual caps for refugees and migrants, stating that it would accept no more than 80 asylum seekers per day, with an annual cap of 37,500.

© REUTERS / Alexandros Avramidis
Stranded refugees and migrants try to break a Greek police cordon in order to approach the border fence at the Greek-Macedonian border, near the Greek village of Idomeni, February 29, 2016.

The decision has led to friction between some of Vienna's allies, while it has resulted in a greater sense of urgency for the EU to come to an agreement over the migration crisis.

Europe is facing major challenges due to the #RefugeeCrisis: Closed borders, deaths in the Mediterranean and intolerance

Austria's actions, which were mirrored by Balkan states Slovenia, Serbia and Macedonia, have triggered fears Greece may be ostracized from the rest of Europe and turning into a 'parking lot' for refugees and migrants.

"We need a political decision now. Soon it will be too late. The Austrian ceiling of 37,000 will be reached," Ivanov said, arguing that Macedonia was merely following developments further up the Balkans route.

"Such decisions are made between police authorities along the Balkans route," he said.

"Whenever a country to the north closes its borders, we follow suit… You must understand that the situation changes not just by the day, but by the hour."

While officials in Brussels and Berlin have called for Balkan countries to open their borders, Ivanov returned fire and criticized the EU's inaction over the migration issue.

"We can't wait until Brussels makes a decision. We have made our own decisions. In times of crisis, every country must find its own solutions… If we had waited for EU guidelines, Macedonia would have been flooded with refugees."

Increasing the pressure on EU member states to find a common solution to the migration crisis, Ivanov warned the current impasse, which has triggered the stricter border controls, would also play into the hands of people smugglers and criminal syndicates.

"No-one wants to stay in Greece, Macedonia and Serbia," he said.

"The goal of the refugees is Germany. They will find a path there. A dangerous path."