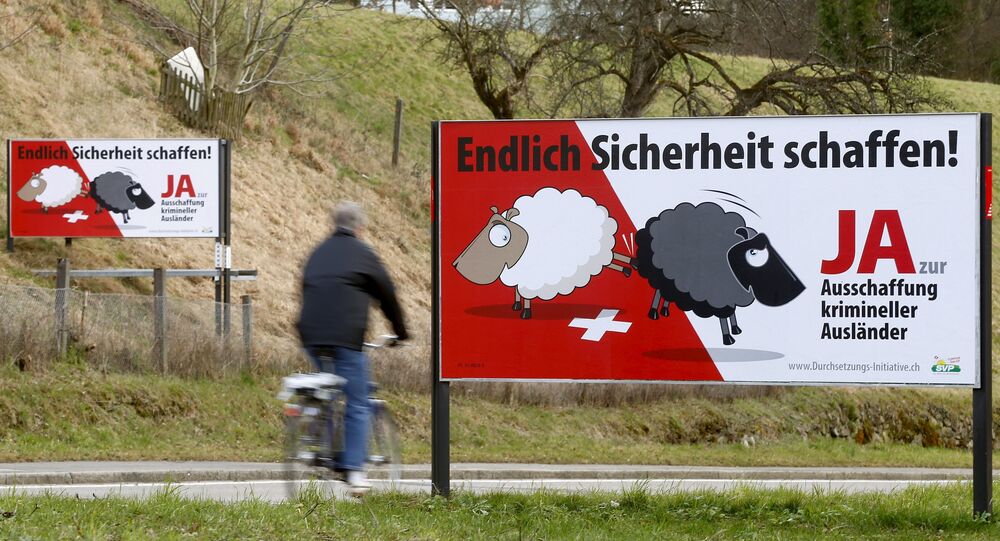 The results of Sunday's referendum in Switzerland, where the initiative to expel foreign nationals convicted of even minor offenses was rejected, could change the balance of political power in the country, a spokesperson for the Social Democratic Party of Switzerland told Sputnik on Tuesday.

MOSCOW (Sputnik), Alexander Mosesov — On Sunday, 58 percent of voters voted against the proposition put forward by the anti-immigration Swiss People’s Party (SVP), which had come in for heavy criticism from politicians, government bodies, aid agencies and other non-governmental organizations.

"It was a historic victory of the people in Switzerland over a party, which showed a more and more totalitarian striving for power in the last years. This result could change the balance of power in Switzerland. We, as Social democrats, always fought against the right-wing SVP. But we have been alone in this combat for too many years. Our hope is that the moderate-center parties will now awaken and find new courage to defend civil rights, liberty and democracy," Michael Sorg said.

© REUTERS / David W Cerny
Trespassers Will Be Shot: Migrants Send Paranoid Czechs Scrambling to Buy Guns
According to current legislation, foreigners can be deported from Switzerland if convicted of murder or sexual violence.

At the same time, campaign manager for the Christian Democratic People's Party of Switzerland Laura Curau noted that the results of the referendum were "a clear No to the attack of the SVP to our Constitutional state."

Over five million people were eligible to vote on the issue in Switzerland, while some two million foreigners living in the country could not participate in the referendum.