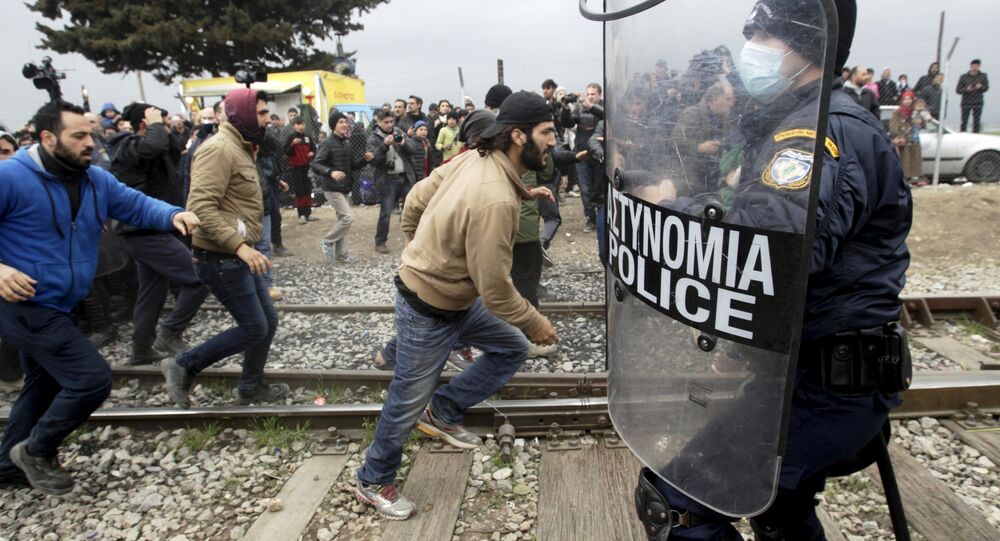 As tensions boil between refugees and riot police in Macedonia and France, 7,000 people remain stuck in Greece.

"We estimate that in our country the number of those trapped will be from 50,000 — 70,000 people next month," Greek Migration Minister Yiannis Mouzalas told Mega TV.

Instead of pulling together to solve the refugee crisis, countries across the EU are splitting apart, taking individual actions to stem the influx of asylum seekers into their country.

Austria's Chancellor Werner Faymann is accusing Greece of "behaving like a travel agency" as thousands of migrants remain stranded at the country's northern border with Macedonia.

Austria recently imposed a limit on the number of asylum seekers allowed to cross and held a summit for Balkan nations to discuss migrant flows — but didn't invite Athens.

Greece responded by recalling its ambassador to Austria and threatening to block any future EU decisions until the bloc worked together to deal with the crisis.

In France, makeshift shelters have been set on fire with riot police firing tear gas at migrants wielding rocks at the so-called "Jungle" camp in Calais while French authorities bulldoze part of the shanty town.

Elsewhere in Macedonia, police also fired tear gas at refugees and migrants after they stormed the barbed wire border fence from Greece in frustration of recent restrictions imposed on people moving through the Western Balkan route. Scenes from the chaos showed children chocking on tear gas.

Several hundred men, women and children protested by lying across railway tracks at Idomeni. Others held posters that read: "Open the borders, no food… We are humans not animals."

Stick Together and Stop Squabbling

© AP Photo / Markus Schreiber
Merkel Says Migration Crisis 'Biggest Challenge' of Tenure
German Chancellor Angela Merkel still stands by her decision to reject any limit on the number of asylum seekers allowed into Germany, despite rifts within her own government.

"There are many conflicting interests in Europe… but it is my damn duty to do everything I can so that Europe finds a collective way," she told state broadcaster ARD.

Merkel's remarks have been countered by an invitation by Austria's defense minister, for Germany to take refugees directly from Greece.

"The German chancellor… said that formally there is no upper limit in Germany. Then, I would invite her to take the people, who arrive in Greece now and whom she wants to take care of, directly to Germany," Hans Peter Doskozil told Austrian Oe1 radio.

Germany's Foreign Minister says the EU must stay together to solve the migrant crisis and stop blaming each other. Frank-Walter Steinmeier told Greek daily Ta Nea:

"We must fight for Europe. We must stop blaming each other. On the contrary, we must unite forces and work together for a European solution to the refugee crisis.

"This is the only way for Europe to emerge stronger from the crisis," Steinmeier said.

Steinmeier has reiterated calls by German Chancellor Angela Merkel that Europe must adopt a common approach to solving the refugee crisis while countries continue to squabble.

"Neither side can benefit when inside the EU one blames the other. In this way we are not moving ahead by even one step in managing the refugee crisis.

"The rifts that are being formed now must be laboriously healed again", Steinmeier said.

Yet riot scenes from refugee camps across Europe and the political rhetoric from Greece and Austria suggest the rifts are widening — not healing.