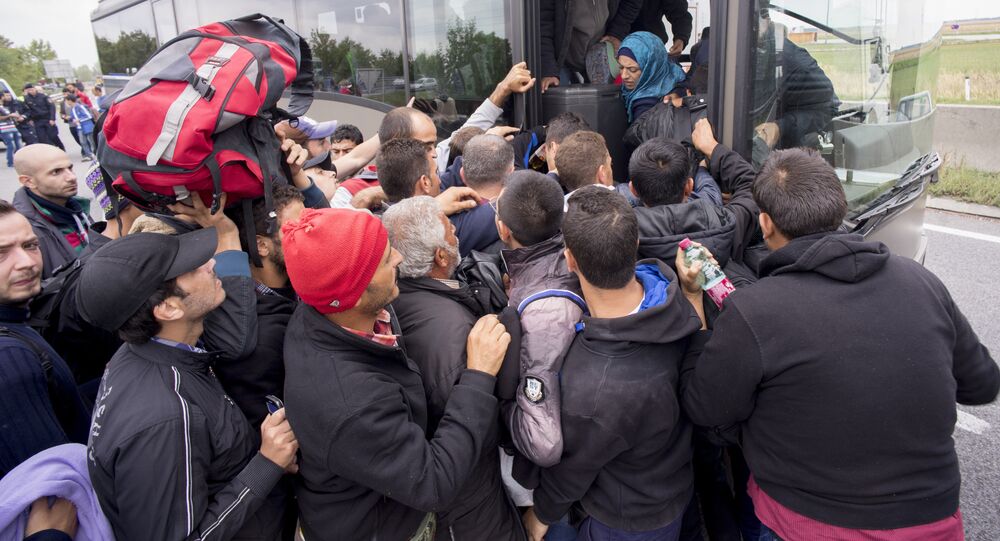 Hungarian authorities expect to spend 200 million euros ($217.6 million) to mitigate the effects of the migration crisis in Europe, the Hungarian Ministry of Foreign Affairs and Trade told Sputnik on Monday.

MOSCOW (Sputnik) — Hungarian authorities expect to spend 200 million euros ($217.6 million) to mitigate the effects of the migration crisis in Europe as the funding provided by the European Union is not enough, the Hungarian Ministry of Foreign Affairs and Trade told Sputnik on Monday.

"This year Hungary is expected to spend roughly 200 million euros to manage the mass migration crisis, an amount which will be paid from the Hungarian tax payers’ money, since the EU has only granted 7 million euros for Hungary for this purpose," the ministry’s press service said, commenting on whether the European Commission provided enough financial support to the country.

© REUTERS / Leonhard Foeger
Hungary Ready to Build Fence on Romanian Border to Deter Migrants
According to the Hungarian government's estimates, by the fall 2015, more than 60,000 people entered the country illegally. Most migrants entered Hungary en route to Austria or on their way further to the west, but many stayed.

Last September, the EU countries decided to relocate some 120,000 migrants with a 6,000-euro reward to beneficiary state for each relocated person. The quota plan that obliges Budapest to take in almost 2,300 migrants in two years was agreed by majority vote despite opposition from Hungary and some other mainly Eastern European states.

Budapest has filed a law suit against the mandatory resettlement quotas at the Court of Justice of the European Union. It was "a clear declaration that Hungary does not consider the concept as an enforceable idea," the country’s Foreign Ministry said.

In December, the legal battle between the bloc and Hungary continued, with Brussels launching a legal case against Hungary’s stringent asylum law.

On February 24, Hungarian Prime Minister Viktor Orban called for a referendum on whether to accept mandatory EU quotas for relocating migrants, which may be held this fall, according to the head of Department of Communication and International Relations at the National Elections Office, Listar Daniel. In case its results are in breach of EU law, Brussels has the right to sue Budapest at the European Court of Justice, the court's press officer Balazs Lehoczki told Sputnik earlier in February.

Not Ready for Refugees? Belgium May Fine Towns for Not Taking in Migrants

Over 100,000 Migrants Arrive in Greece, Italy in Under Two Months