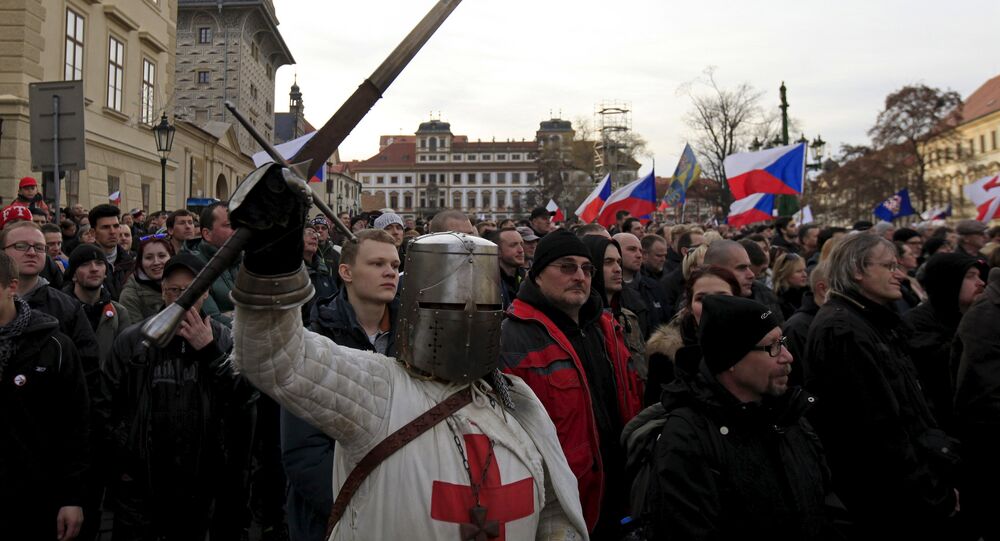 Over the past few months, an ever-increasing number of people in the Czech Republic have indicated an interest in purchasing firearms for protecting themselves from refugees, according to Radio Prague.

© AFP 2021 / JEAN-CHRISTOPHE MAGNENET
Czech Republic Ready to Accept ‘Hundreds of Migrants’ From EU, Africa
Over the last several months, more Czech citizens have signaled their readiness to acquire guns in order to protect themselves from migrants, Radio Prague reported.

The next few years will see even more Czechs looking to obtain a gun license, Radio Prague said. The station cited the growing number of people seeking training at the country's shooting ranges.

In an interview with Czech television, Jiri Otta from the Kapslovna shooting range said that "they face a real invasion of people who are eager to be trained," according to Radio Prague.

"Of course, I do not want to pose as a political forecaster but it seems that this increased interest in weapons was caused by people's fear over refugees," Otta said.

He pointed specifically to the fact that professional examinations for firearm licenses are administered to people between 21 and 85 years of age. The license they obtain is related to the so-called B group of firearms, which are normally sought out by those who intend to use their guns for sporting purposes.

In reality, however, the situation has nothing to do with sports, according to Otta.

"This certificate allows a person to buy absolutely any weapon — from a small revolver to a hefty rifle. People prefer to obtain similar documents for self-defense, which is a normal practice nowadays. Listening to all those people prompts me to believe that I must buy a firearm too," he said.

In October 2015, the Czech Defense Ministry said that they were deploying about 650 servicemen to the country's border with Austria to provide assistance to police officers in the event of an unprecedented influx of undocumented immigrants.

© AFP 2021 / Bulent Kilic
Resolve Refugee Crisis With More Legal Migration, UNHCR Urges
Apart from the Czech Republic, an increase in the number of those who are willing to purchase arms amid the ongoing migration crisis has also been registered in a number of other European countries, including Austria.

In Germany, Britain, Denmark and the Netherlands, obtaining a working firearm and ammunition is practically impossible for the average citizen because of strict laws, the WND said.

West Shows 'Lack of Will' to Solve Refugee Crisis They Created