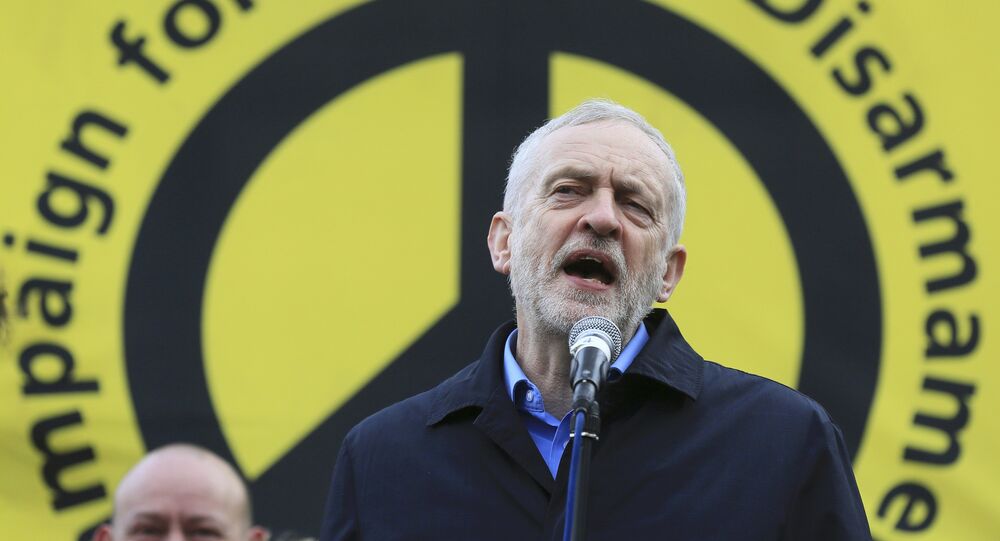 The Labour party leader Jeremy Corbyn joined thousands of campaigners against the renewal of the Trident nuclear program in central London on Saturday. A long time anti-nuclear activist, Corbyn said that if elected leader, "he would seek to replace Trident not with a generation of nuclear weapons but jobs that retain community skills".

"Too often the debate on nuclear weapons is presented as a cynical set of alternatives that are brought forward. I think we should consider for a moment what a nuclear weapon actually is. It is a weapon of mass destruction."

"If ever used it [nuclear weapons] can only kill large numbers of civilians. They have only once been used in war and that was in Japan in 1945 and we still see the consequences in the cancer and destruction and the horrors of the very old people in Hiroshima and Nagasaki. They were used in testing in the Pacific and other places. The victims in the Marshall Islands are still living with the consequences of those tests as indeed the people in Australia and the US, Russia and many others."

© REUTERS / Paul Hackett
Stop Trident: Anti Nuclear Weapons Demo Takes to London Streets
Corbyn has long campaigned against nuclear weapons, having been a member of the Campaign for Nuclear Disarmament (CND) and the national chair of the Stop the War Coalition from June 2011 until September 2015.

"Everyone who is about to make a decision on what we do about our nuclear weapons, should think about the humanitarian effects on wholly innocent people anywhere across this globe – if they are ever used," Corbyn said.

"Britain is a signatory to a Nuclear Non-Proliferation Treaty (NPT). That treaty came about because, in part, of the work of the Labour government from 1964 to 1970."

"The NPT has worked in many ways. Those countries that did not have nuclear weapons for the vast majority have not taken possession of them. Whole parts of our globe have become nuclear weapons free zones — Latin America, Africa and central Asia for example. It is a credit to the leaders of all those countries that it was possible and was brought about. They have to be commended for that."

In his speech, Corbyn stressed:

"If elected leader I would seek replacing Trident not with generation of nuclear weapons but jobs that retain the community skills."

#Corbyn at #StopTrident rally: "If elected leader, I will not be seeking to replace #Trident" pic.twitter.com/EhgbwtaceN

Corbyn’s decision to join the rally against the renewal of UK’s nuclear deterrent program has infuriated many Labour MPs, who claim he is campaigning against the party’s policy on Trident.

At the same time, Labour-supporting unions criticized Corbyn’s stance, saying that any move to not replace Trident will lead to the loss of thousands of jobs, with the Labour Party claiming 19,000 jobs depending on Trident in Scotland alone.