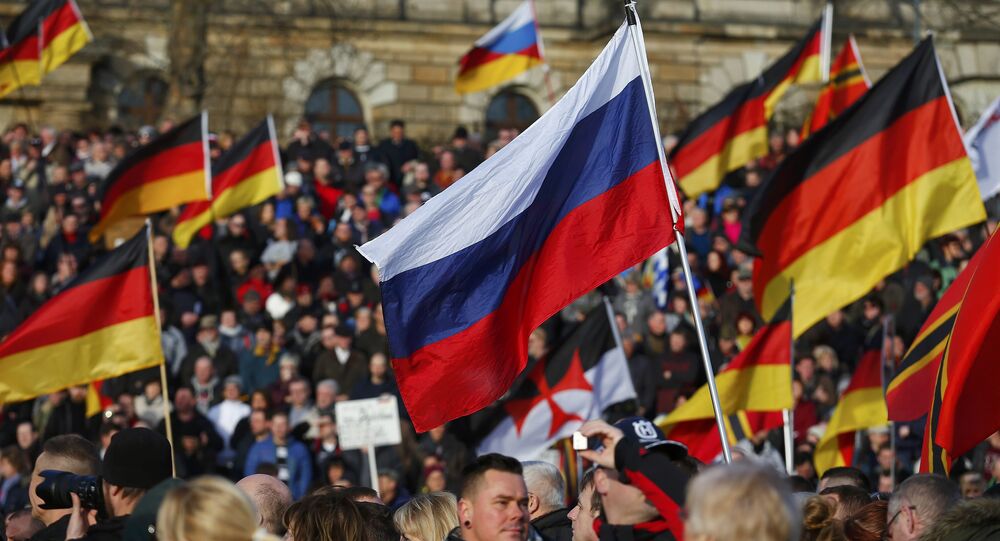 Merkel to Siberia and Putin to Berlin: Germans Voice Their Political Choice

Many residents of the eastern German state of Saxony are convinced that the only person capable of saving their country from political chaos, the refugee influx and their “corrupt, anti-popular government” is Russian President Putin; actually taking to the streets while chanting an invitation for him to come.

Every Monday evening in Dresden, the capital of the the eastern German state of Saxony, thousands gather in front of the city's Opera House mostly in protest of the German government's refugee policies.

However, recently there are not only German flags being waved, also, somewhat surprisingly, there are plenty of Russian tricolors as well. There are lots of banners on display clearly signaling that the Dresdeners would gladly exchange their Chancellor Angela Merkel for Russian President Vladimir Putin, according to the German Die Welt correspondent Michael Pilz.

Another popular chant is “Putin – to Berlin, Merkel – to Siberia”. As the newspaper explains, the slogan reveals not only the political preferences of the Saxonians, but the former place of work of the Russian president.

© AFP 2021
How the US Runs the EU
It is already a well-known fact that Vladimir Putin’s career as a KGB officer included a five-year term in Dresden.

However, the relationship between Russia and Saxony was not always very friendly. Back in the times of the German Democratic Republic (1949-1990), commonly known as Eastern Germany, the Saxonians did not favor the Soviet Union, which was considered the “occupying power.”

Back in 1979 one Dresdener reportedly sent a letter to Eastern Germany TV, saying that no one can “make Russians out of Germans. Germany will always remain German.” The Soviets were then denounced as “colonialists” and “subhuman,” and the government of Eastern Germany – as a Soviet sycophant.

The situation changed only when Mikhail Gorbachev, who accelerated the fall of the  Berlin Wall, came to power back in 1985.

However, nowadays many in the streets, the newspaper says, plead for President Putin to come in and save the Saxonians from political chaos, the refugee influx and their “corrupt, anti-popular government.”

Germany Sees No Alternative to Dialogue With Russia