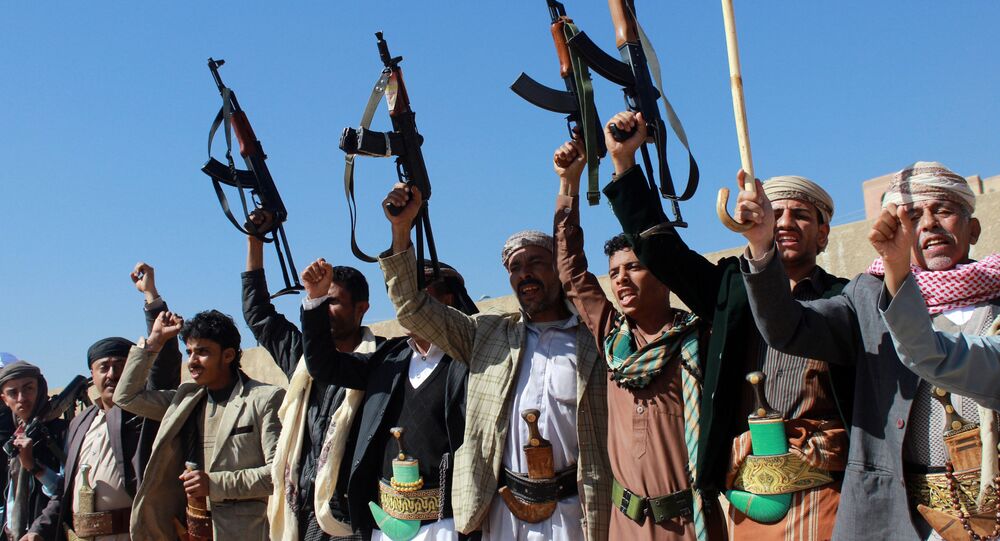 "Business as usual" for Britain's arms trade with Saudi Arabia, despite MEPs voting for a European Union arms embargo against the Gulf kingom, a Middle East expert told Sputnik.

Academic, author and expert in Middle East politics, Dr Christopher Davidson said the EU-wide ban on arms sales to the kingdom is "hollow."

"It's yet another example of the hollowness of the EU. Not least that Britain may be exiting the EU completely; Britain is the biggest arms seller to Saudi Arabia, so it'll be business as usual," Dr Davidson of Durham University told Sputnik.

The majority of MEPs voted to ban sales of weapons to the Gulf State, citing the "disastrous humanitarian situation" due to the "Saudi-led military intervention in Yemen." However, the European Parliament vote doesn't compel every member state to act.

"It's Britain and France we need to talk about […] the main suppliers of arms to Saudi Arabia," said Dr Davidson, who is cynical of the recent vote.

"It's all very well that they've come to this conscious decision now, painting Saudi Arabia as a rogue state, yet the arms trade has been going on for years. Now Saudi Arabia is running out of cash and unable to be the same economic trade partner it once was, they are no longer as useful to the EU any more."

Saudi Arabia is Britain's biggest ally in the Middle East and the British government has supplied export licenses for arms worth up to US$4.2 billion (£3bn) for the kingdom.

"Years ago, it would have been inconceivable to have motion in the EU parliament when Saudi Arabia was such a source of inward investment for the EU," Dr Davidson told Sputnik.

Opposition towards the ban included Britain's Conservative MEPs, whose ministers recently attended a banquet hosted by the arms trade elite, on the same day MPs called for a suspension of all weapons sales to Saudi Arabia.

The UK has been accused of being complicit in the killing of civilians in Yemen by Saudi airstrikes by deploying UK military personnel to the kingdom. Although Saudi Arabia says it does not target civilians, recent civilian targets include two international hospitals, a wedding and five schools in Yemen.

"The arms trade with Saudi Arabia is an extremely bad thing for the reputation of western governments who have very disturbing links to the atrocities carried out in Yemen using EU arms, especially British ones," Dr Davidson told Sputnik.

"We're starting to see the ripple effect of all sorts of relationship with Saudi the swing producer of oil; they're all starting to unravel now," suggesting that "OPEC [Organization of the Petroleum Exporting Countries] is pretty much done now.

"Half a century of cartel action with Saudi Arabia at the top is effectively finished," Dr Davidson said.

© AFP 2020 / Fayez Nureldine
Saudi Arabia Becomes Biggest Arms Importer in Middle East
Following the vote, Richard Howitt, Labour's foreign affairs spokesman in Europe said: "This is a clear humanitarian appeal to end the bloodshed in Yemen, and call on Saudi Arabia to pursue a political rather than military solution to the conflict." Howitt also reiterated calls for Britain to stop selling weapons to Riyadh.

Saudi Arabia is accused of bombing civilians, deploying child soldiers, and using starvation as a weapon of war. The British government denies any involvement in the Gulf kingdom's military campaign.