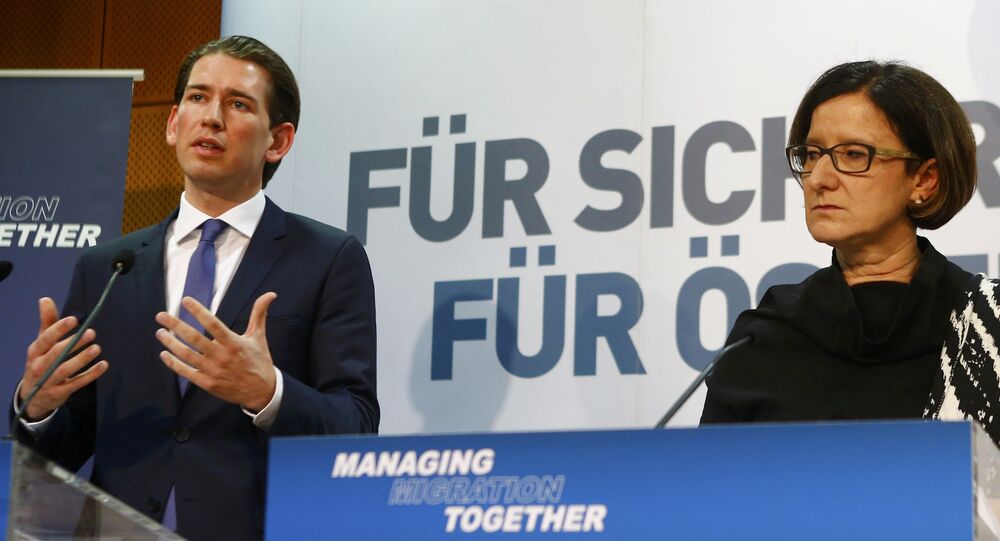 German government sources have expressed anger at its close ally and neighbor Austria for organizing Wednesday's meeting of the Balkan States in Vienna, which is slated to agree further border controls to stem migrant flows, in defiance of Berlin and Brussels.

© REUTERS / Giorgos Moutafis
Austrian FM Accuses Greece of Showing No Interest in Curbing Refugee Influx
Germany is pushing for a pan-European approach to the migrant crisis — led by the European Commission — to secure the external border of the Schengen zone, while not closing its internal borders. It is also pushing for a common agreement on the resettlement of genuine refugees throughout Europe, but has met stiff resistance — particularly in Eastern Europe.

Austria called the conference and invited the interior and foreign ministers of Albania, Bosnia and Herzegovina, Bulgaria, Kosovo, Croatia, Macedonia, Montenegro, Serbia and Slovenia. The government statement said "the aim is to reach agreement on current migration challenges" and discussions will center on internal security, border management, extremism and foreign policy.

@ElenaBec @daphnenews as if Greece has any say as to what Turkey does.
Germany does, but Germany throws money at Turkey+ no result

The meeting follows the announcement of a call from the Visegrad group of countries — the Czech Republic, Hungary, Poland and Slovakia — together with Bulgaria and Macedonia for urgent action to close the borders Macedonian and Bulgarian borders with Greece to deal with the refugee crisis, effectively cutting Greece off from the Schengen area.

However, sources in the German government made it clear it was deeply unhappy with the Vienna-led conference, which some perceive as leading to a mini-Schengen. No representatives from Germany, Greece or even the EU were invited to the meeting, drawing further anger over the migrant crisis.

A spokesman for the Greek foreign ministry said the meeting as "one-sided and not at all friendly" while Greece's Migration Minister Yiannis Mouzalas said cutting off the West Balkan route from people fleeing genuine war zones or persecution was anti-European.

.@VDombrovskis "Efforts undertaken by #Greece in recent weeks to complete the construction of hotspots have been remarkable" #RefugeeCrisis

"It wounds Europe and will burden our country with something it does not deserve. The Balkan route was a humanitarian corridor. It could close after consultations and not by turning one country against the other."

"We are concerned by the fact that some member states are acting outside the agreed framework for the Western Balkan route cooperation. We believe member states should work together other, and not against each other in this respect."

Austrian Chancellor Werner Faymann called Germany's refugee policy "contradictory" while his Foreign Minister Sebastian Kurz told Bild newspaper: "We have to generally cut down on the flow of refugees. Last year, Austria accepted per capita twice as many asylum applications as Germany. That won't happen a second time."