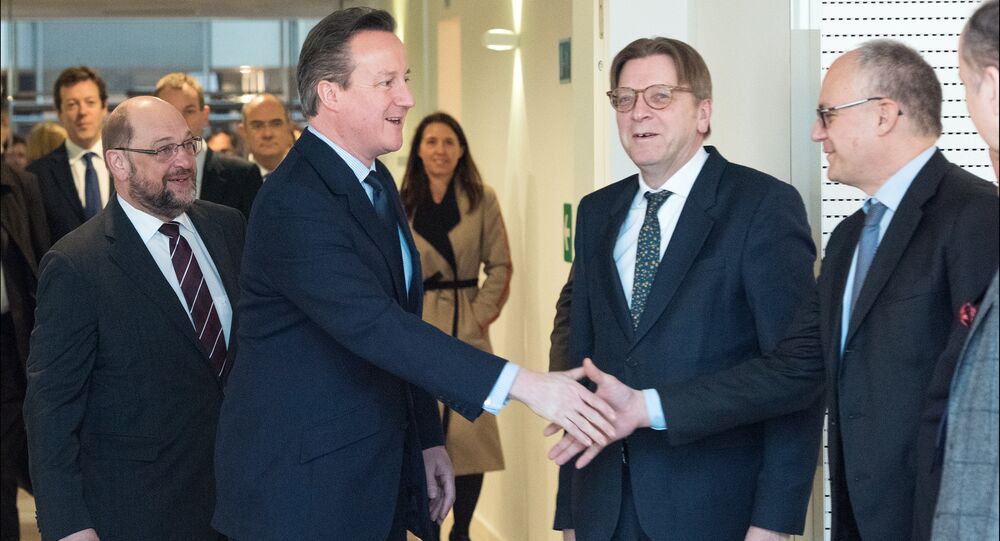 European lawmakers meet for the first time Wednesday to discuss the deal reached over Britain's membership of the European Union amid mixed reaction to the negotiations and worries that others may follow Britain's lead.

European lawmakers are playing up the significance of the deal won by UK Prime Minister David Cameron in which he attempted to win significant concessions over Britain's membership of the EU in order to secure a vote to remain within a "reformed" union at the In-Out referendum he has called for June 23.

Speaking ahead of the plenary session of the European Parliament, Wednesday, it's President Martin Schultz told the BBC: "This is the first time a Conservative Prime Minister of the United Kingdom is fighting for Europe and for the European Union. This is progress in itself. The Prime Minister is running for the campaign to stay in. It is about winning the confidence of British voters."

The lawmakers are — unsurprisingly — keen for the UK to remain within the EU, but fearful of a domino effect of other countries demanding significant opt-outs, or even potentially following the UK out of the EU, in the event that the vote does not go Cameron's way.

PM spoke in @HouseofCommons on how Britain will be stronger, safer & better off in a reformed EU. Full speech https://t.co/lIvgJOgGy3 #EUref

"Now that we know the date of the UK referendum on its membership of the EU, it is time for the real discussion to start — a discussion that focuses not on the narrow terms of David Cameron's 'deal' but on the real issues about the UK's relationship with the rest of Europe.

"The Greens/EFA group firmly believes that the UK's place should be at the heart of Europe. But we also believe that the process of reform of the EU should not stop with this referendum.

"There is still much more that can and should be improved in the way the EU works, issues of far more importance to European citizens than just those areas covered by the UK's 'deal'… But the only way to address these issues is collectively, from within the EU. That is why it is so important that the UK votes to remain in the EU, based on a clear understanding of what is at stake. Then the real work to reform the EU can begin," Harms told Sputnik.

However, the French Foreign Minister Jean-Marc Ayrault, sounded a note of caution over the British deal. Speaking to the Journal du Dimanche, he said there had been "no treaty change, no veto for the UK on strengthening the Eurozone and no questioning of the principle of free movement."

EUref is abt much more than whether UK stays in or not, it's about stability of entire EU. The @aldegroup will strongly campaign a YES vote

This was disputed by Guy Verhofstadt, leader of the Alliance of Liberals and Democrats, who said:

"This deal makes it clear that the UK is no longer committed to ever closer union or further political integration, while ensuring those countries who wish to integrate further can do so. The UK will be given a special status in EU law; this is historic. I have no doubt this is the best deal David Cameron could have hoped for and the last one that should be offered."

Lawmakers in the European Parliament are set to debate Cameron's deal over two days and it is likely there will be similar disagreements over the significance of the reforms he has managed to achieve.

German Companies to Question Expansion in UK in Case of Brexit